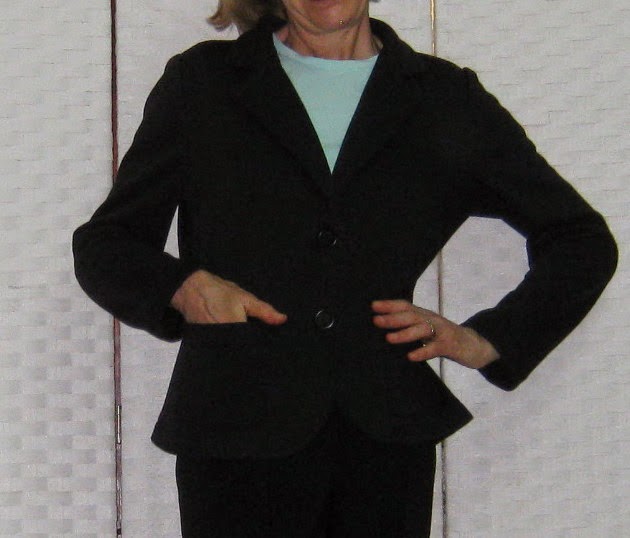 It's done - I have finally made the planned fleece jacket.  It was a little hard going as I have not sewn sweatshirt fleece before (tracksuit fleece) and I did not know it's little ways.  Plus I came down with the most awful head cold.  That's why I have cut my face out of the picture - I have a red nose, and then underneath that, a large cold sore that erupted.  Normally I am quite relaxed about photos, but even I have limits!.

Anyway, back to the jacket.  The pattern is Butterick 5926, designed for knit fabrics: 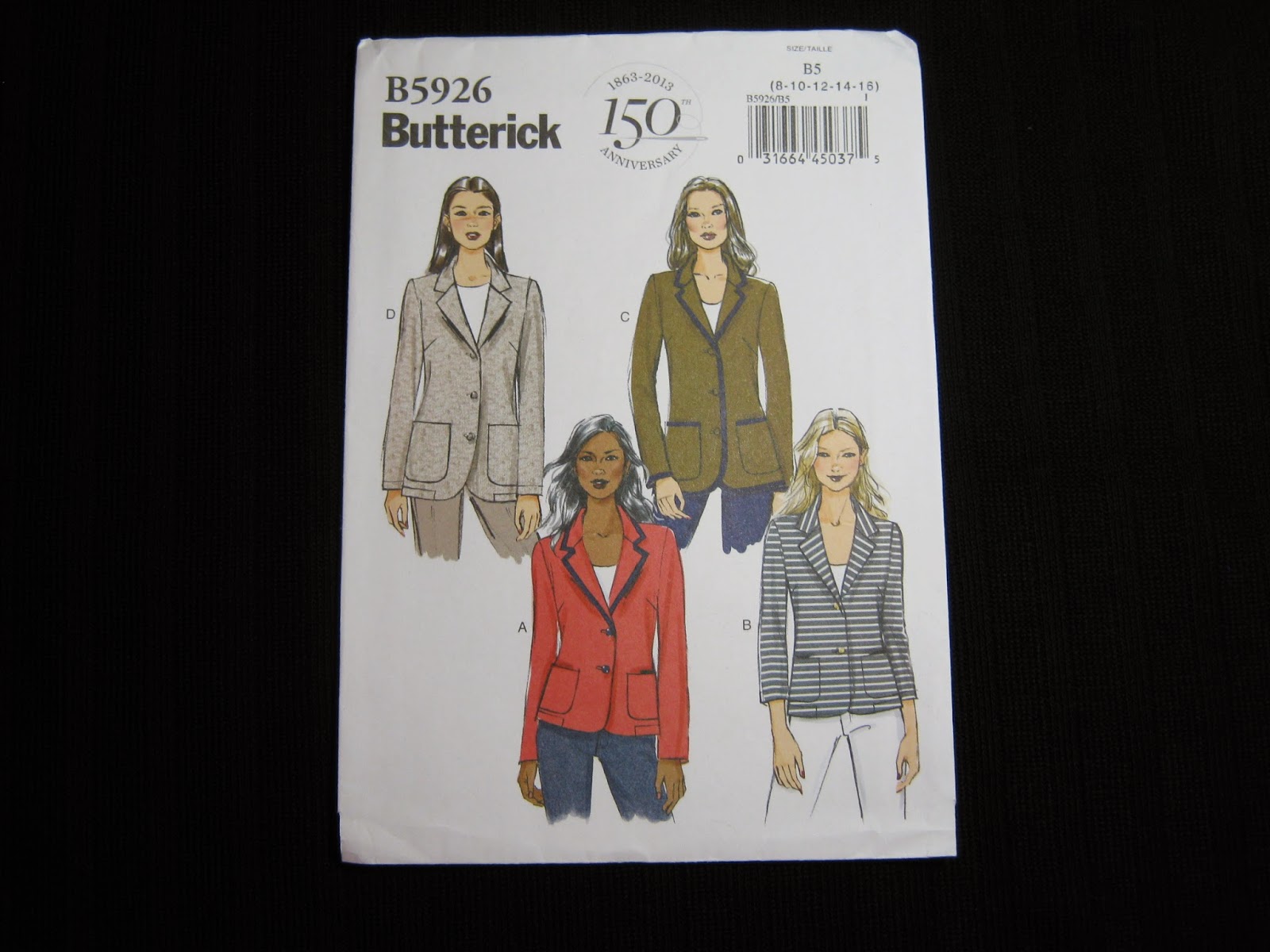 I made the test version immediately prior to this one and have blogged about the process and any pattern alterations here, if you are interested in finding out about this.

I made this version out of polycotton sweatshirt (tracksuit) fleece, purchased from Spotlight.

I cut just a smidge more on the jacket side and sleeve seams as I thought the turn of cloth may take up a bit of room.  I did not want a tight jacket as I may wear it over cardigans and sweaters.

The fabric  seemed to have about the same amount of stretch as the fabric in my test version, but did in fact have just a bit more give.  I also found it very bouncy to sew.  I was a little worried about how the collar would sit, but with top stitching all the layers were forced into place quite well: 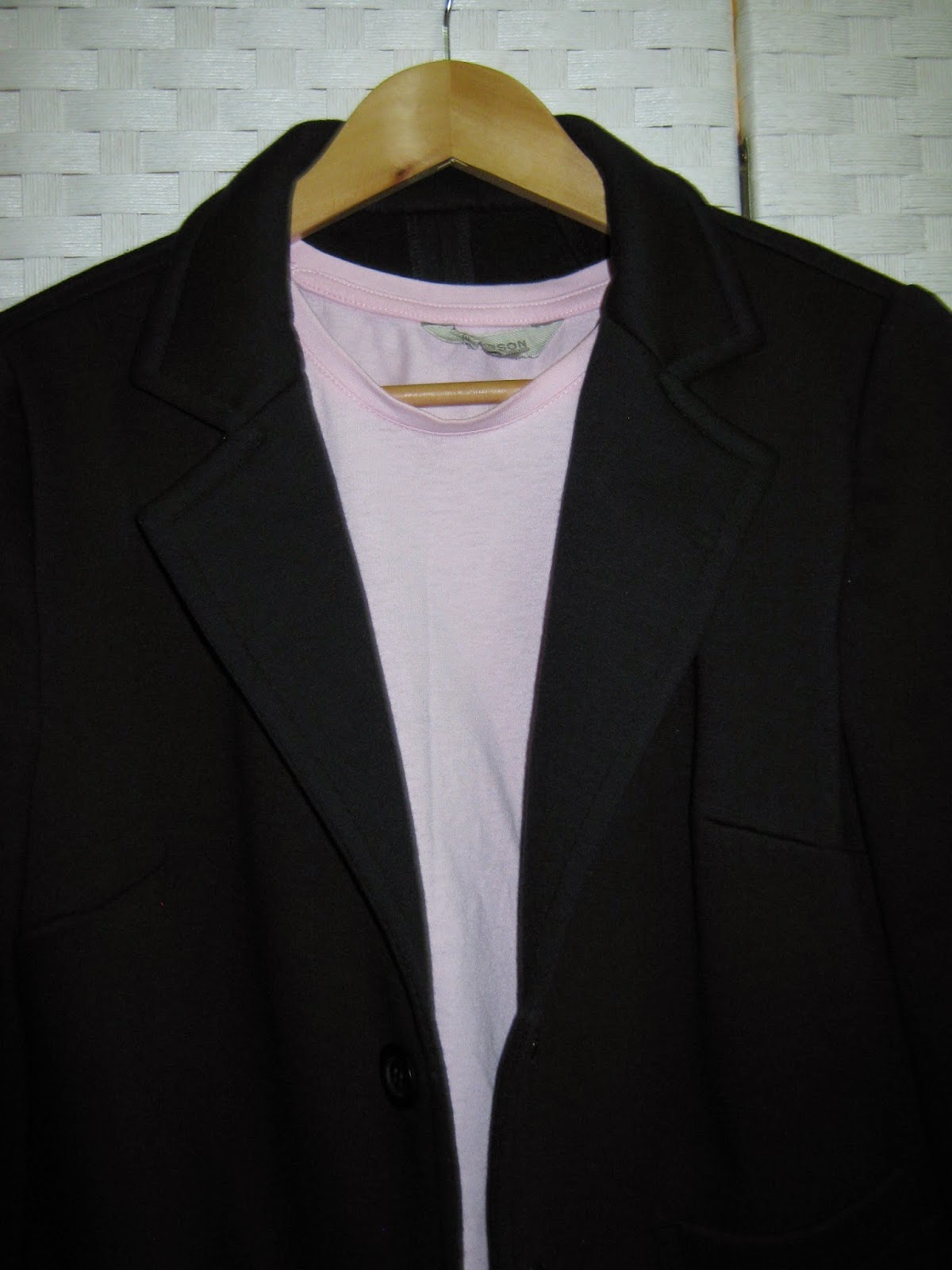 (Hmm, I didn't hang the jacket on the coat hanger straight!  In fact, things do line up properly.  I always check lapel lengths and collar lengths and turns each step of the way, so that there are no hidden surprises like a the front edges being vastly different lengths).

I also stitched the top edge of the pocket down.  The pattern just has this folded over, which worked with last weeks version, but was not going to stay put in fleece.  I stabilised the edge with a strip of interfacing first: 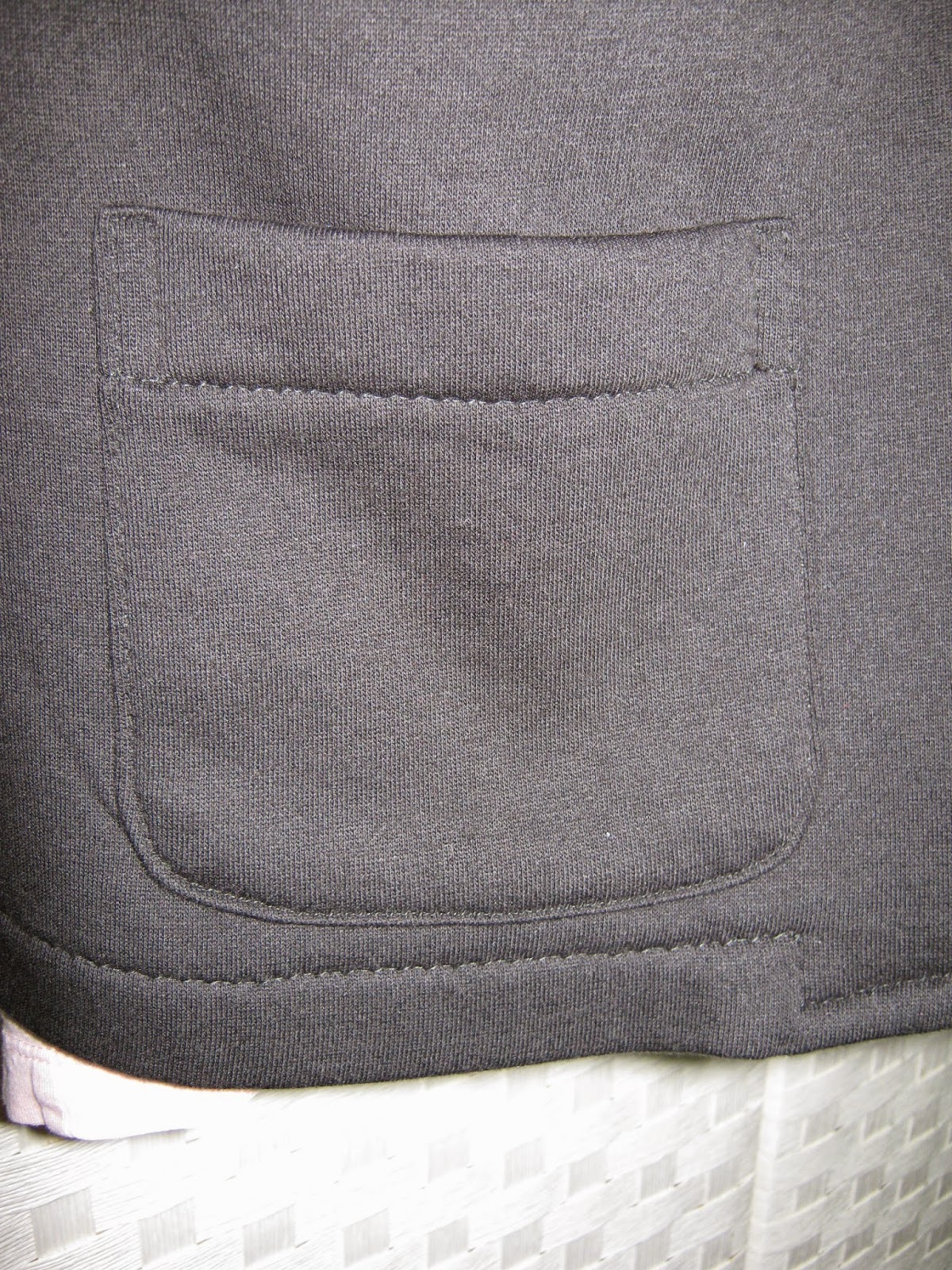 The hem cause me some grief - I overlocked it and then stitched it in place, but it was terribly stretched and distorted.  Out with the stitch unpicker...

I undid it and resorted to cheating.  Yes, Sarah Liz used a product.  I find this almost tantamount to taking an easy shortcut, given that I have had to learn how to do things without such things and believe that to be the hallmark of good sewing!

I used a lightweight fusible something that is quite cobwebby and sticks edges together.   It still seems to have a bit of give, but the fabric is stable when it is sewn.  I am not sure what the equivalent is overseas (I'm in Australia) but this is what I used: 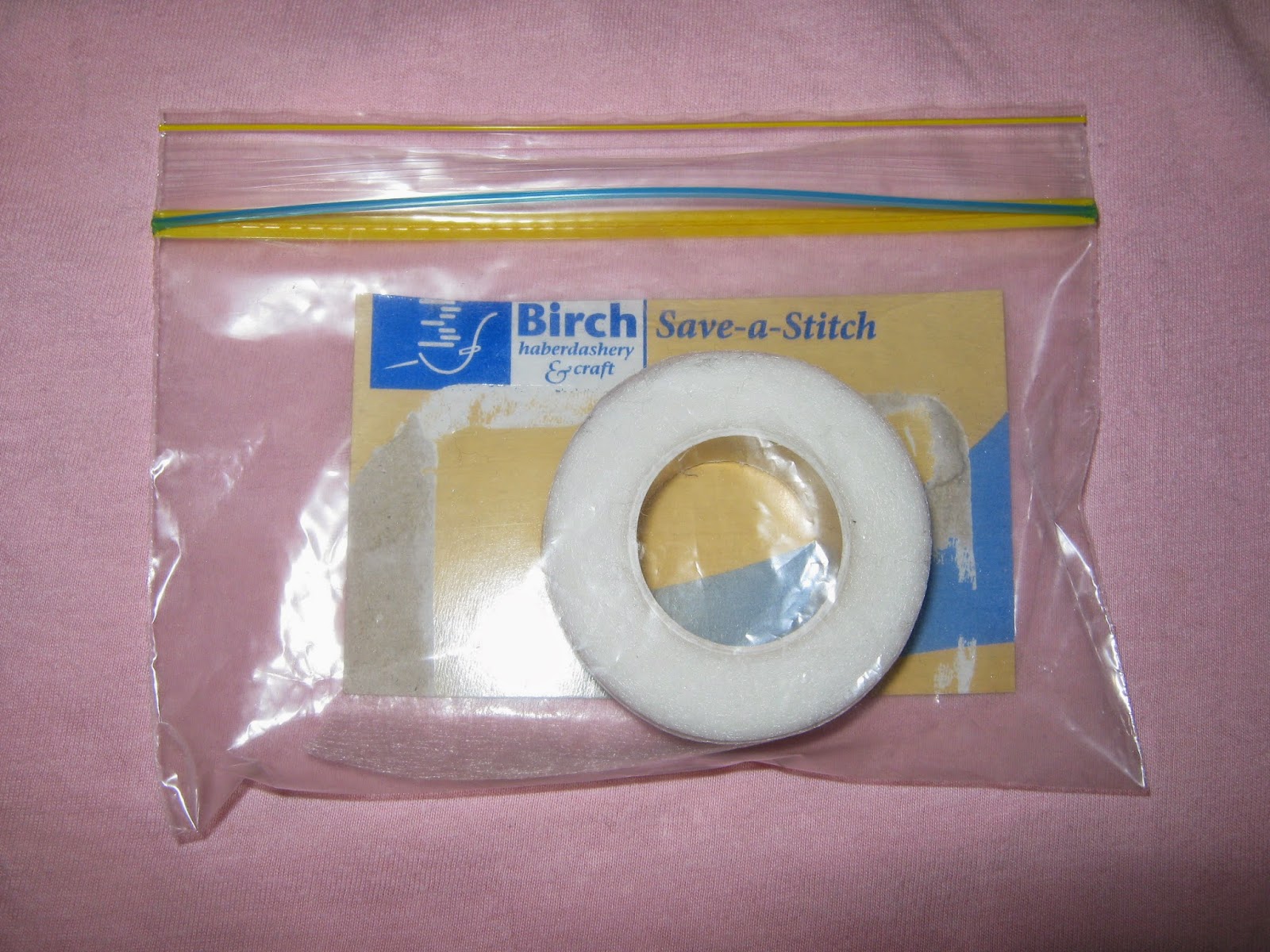 And the finished hem lies flat: 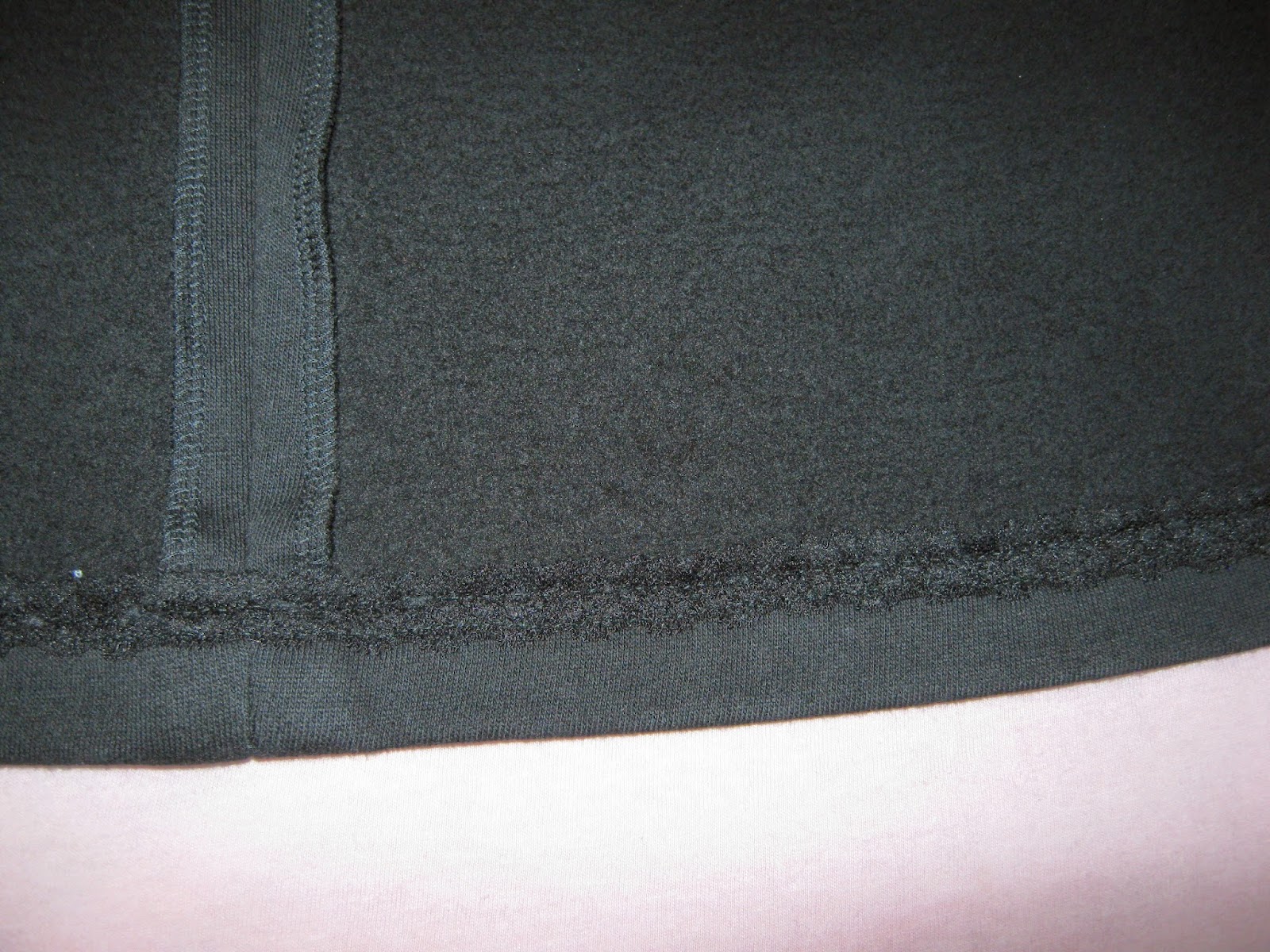 I also used a bit of stretch lace on the edge, just to make things look a little nicer along the hem edge.

My overlocker seems to balk at thick layers, and it did not want to co-operate with overlocking the sleeve/armscye edges, so I bound them with lace, so that they looked finished: 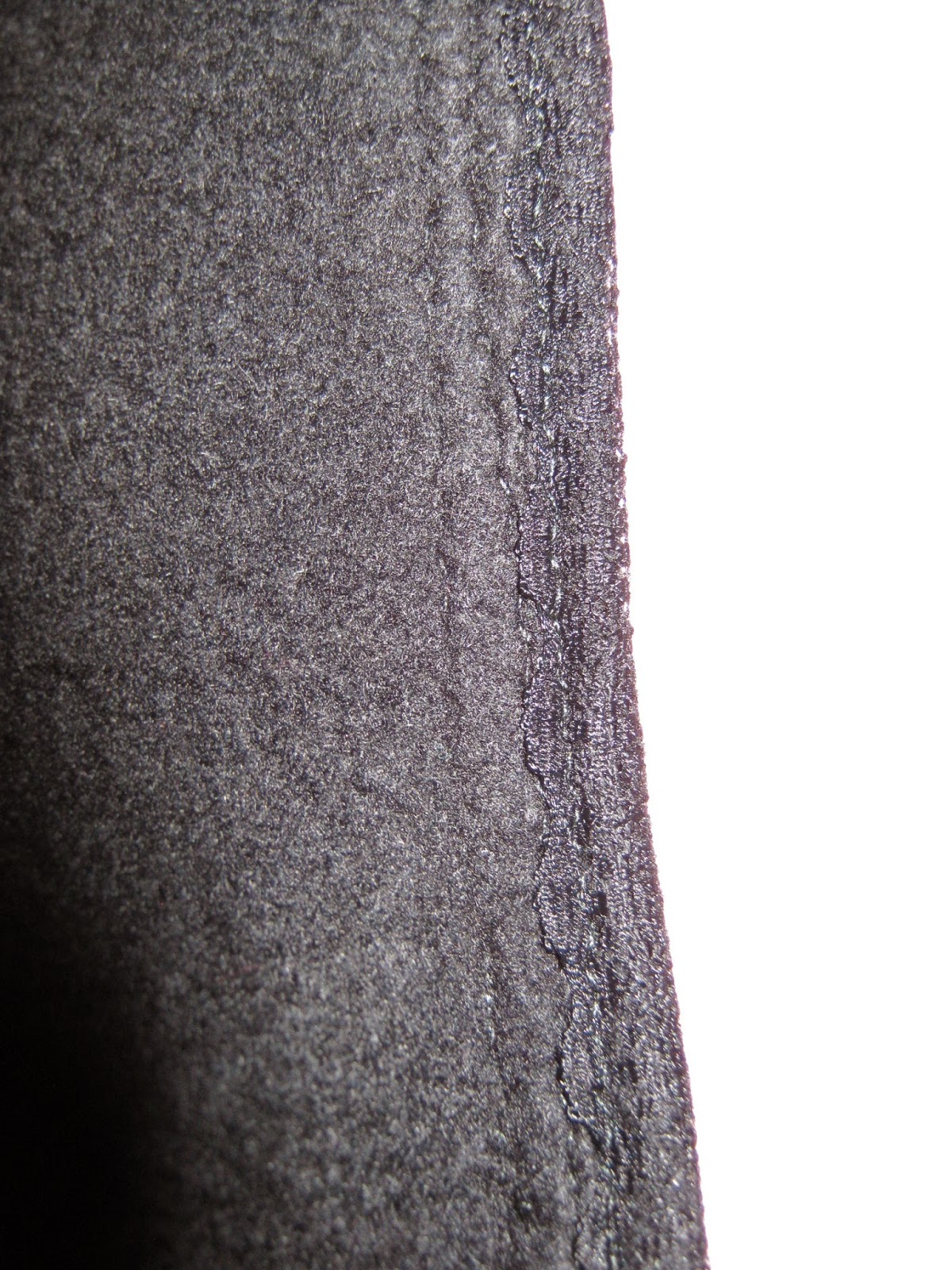 And button, again, the button and snap trick: 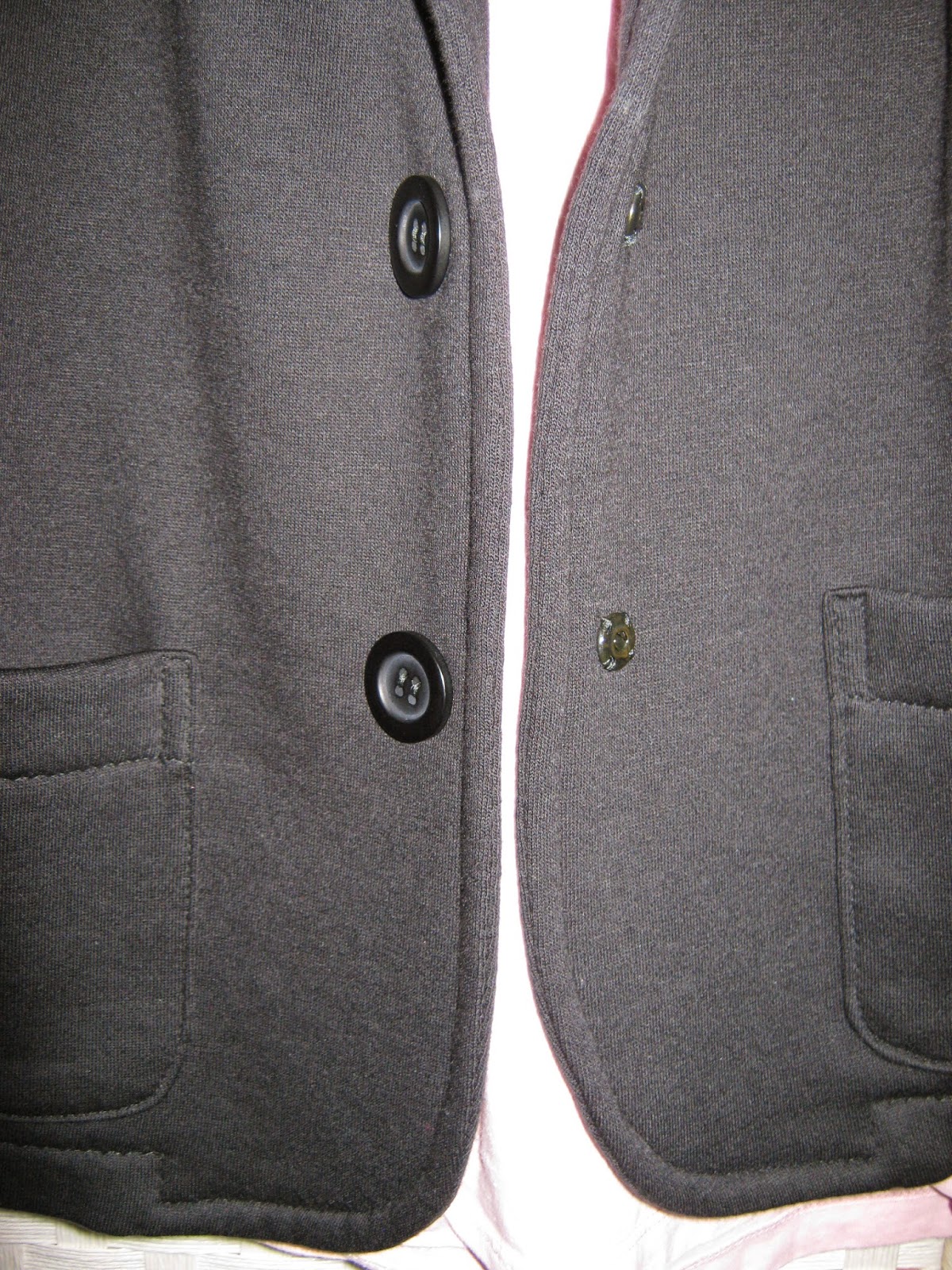 (On the jacket that was not lined up properly on the hanger and so looks uneven at the hem.  Not so in real life when adjusted correctly).

(That's the sort of inattention to detail that happens when recovering from a head cold!).

I did find that the jacket stretched a little across the back/neck, so the shoulders are just a little over the edge of my shoulders.  Next time I will work out a way to stabilise the neck in this jacket - which is unfaced at the back. Maybe I'll cut the undercollar on the non stretchy direction.  I'll figure out a way...

But as my DH says, this is an unstructured jacket, and just what I want for a smart casual throw on thing that can take some punishment.

Okay, pictures now - I've taken care to not quite show my face in most of these, due to the huge red thing that is not very photogenic :).  I'm probably exaggerating, but you probably all know how I feel... 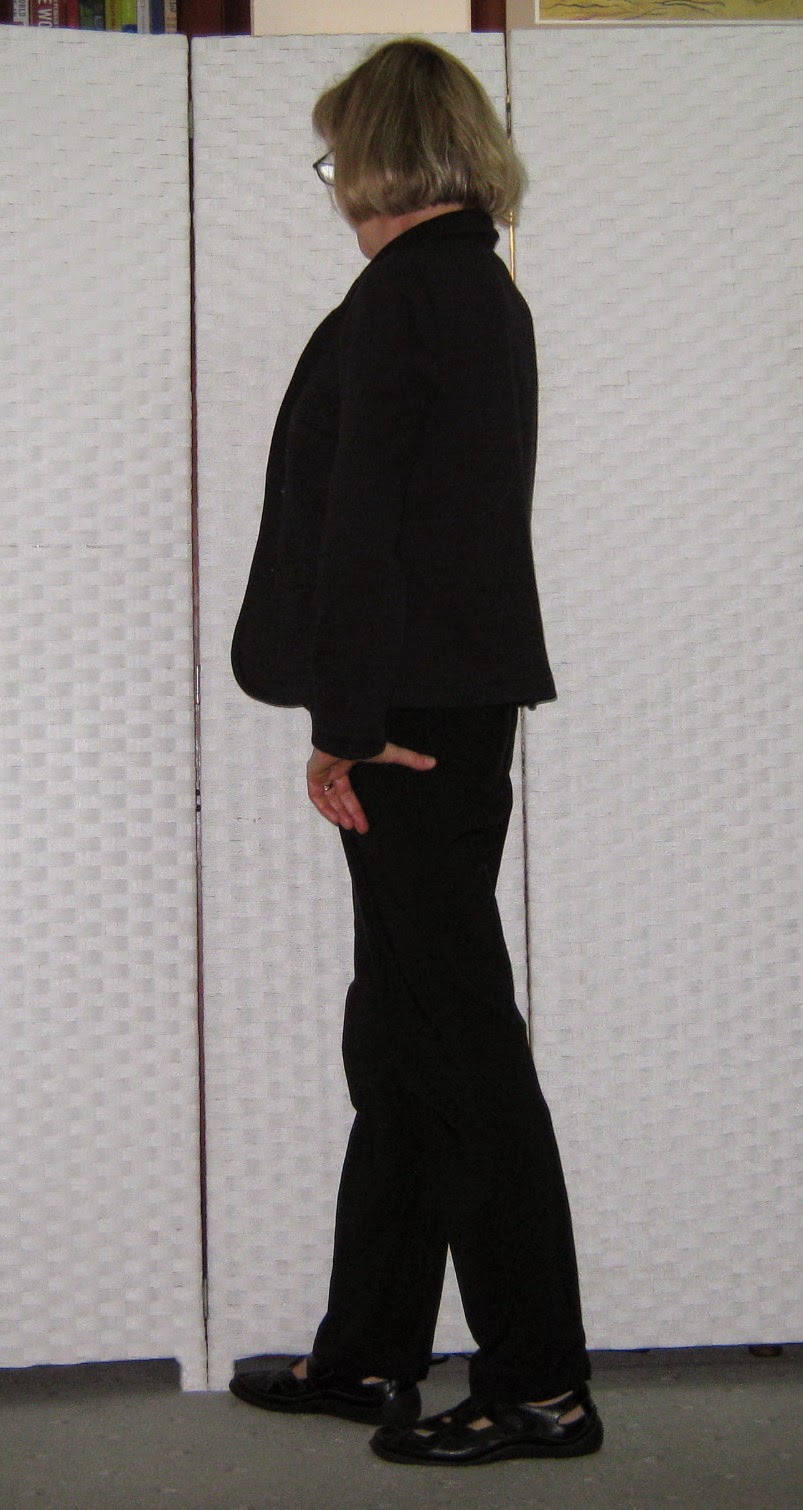 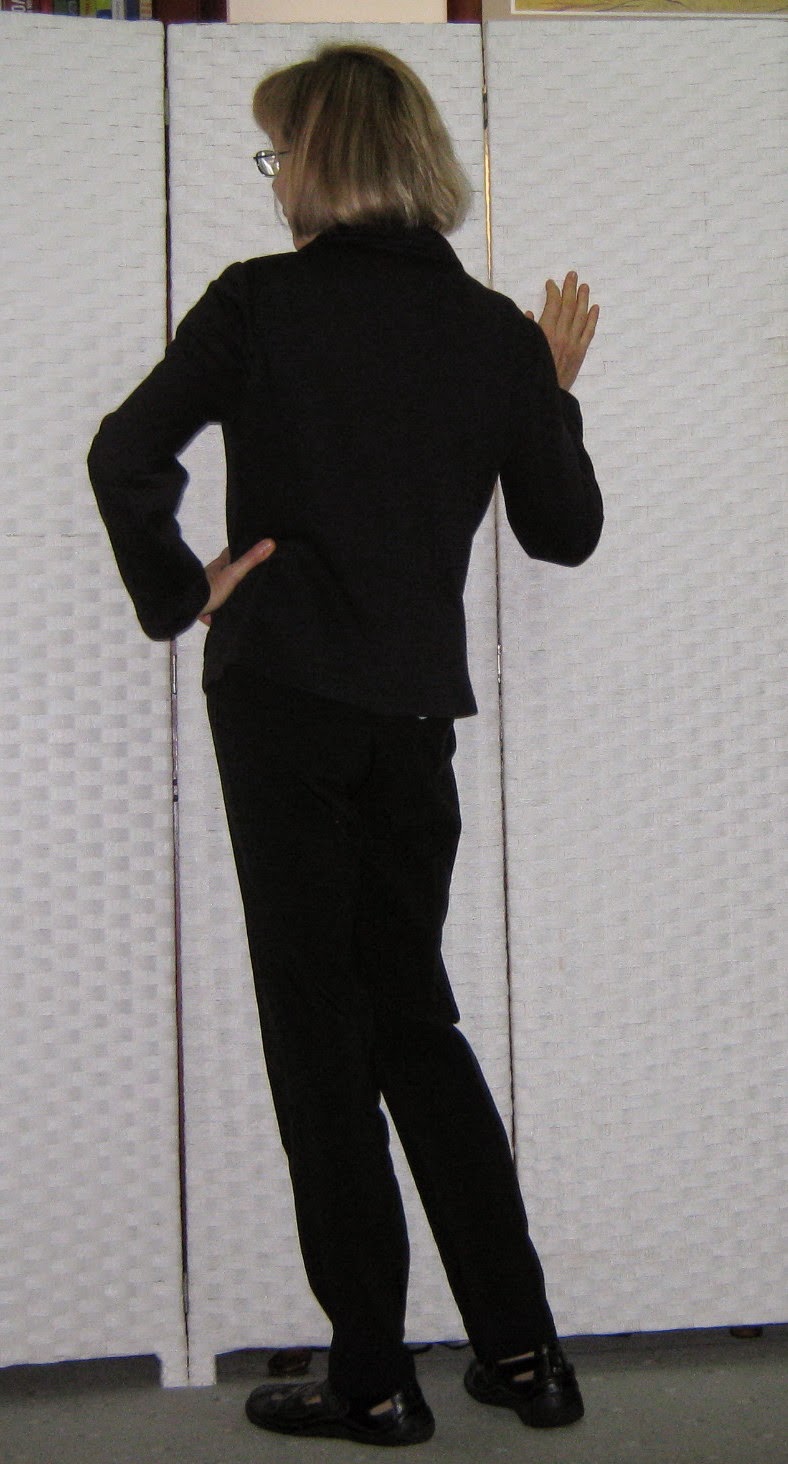 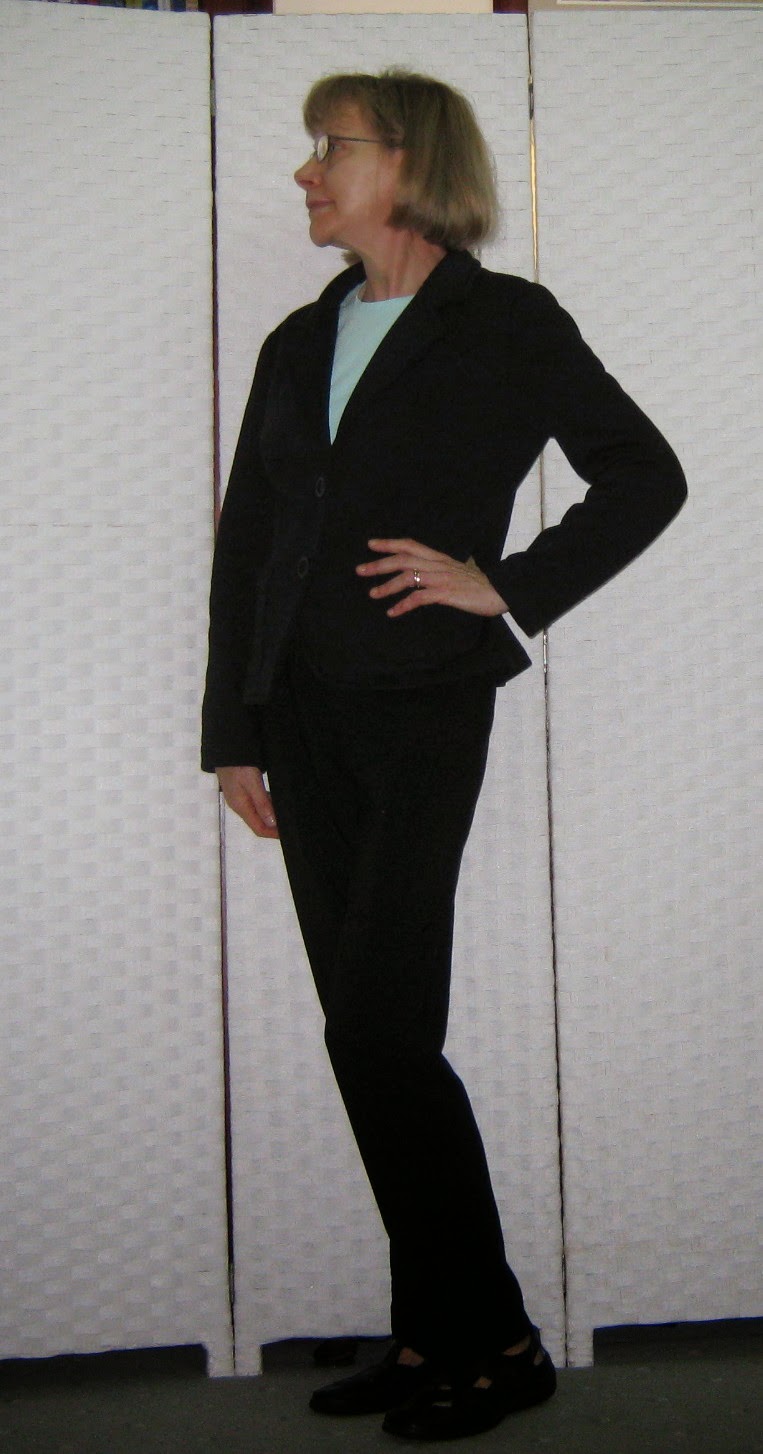 And, finally just to show you that the jacket does line up - I'm standing at a slight angle in this headless shot: 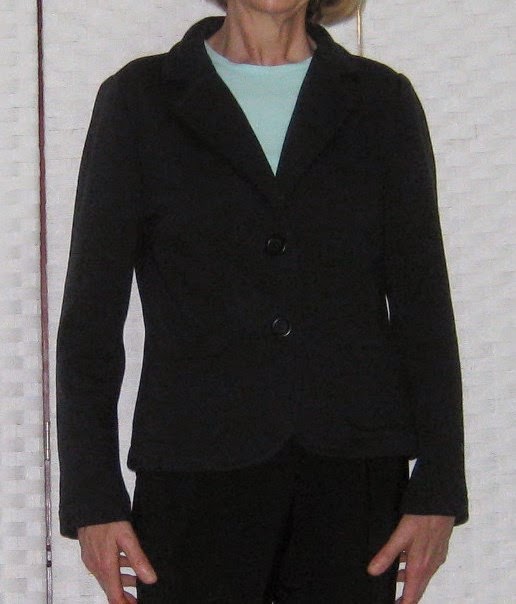 So that's it for this week.  I'm not sure what next weeks sewing plans are - I got a bit behind with study this week due to the under the weather effect, so I will have to catch up.  I'll see what happens.

For now, all the best to you all, wherever you are in the world.

Posted by sarahlizsewstyle.blogspot.com at 5:00 PM

Email ThisBlogThis!Share to TwitterShare to FacebookShare to Pinterest
Labels: Butterick 5926