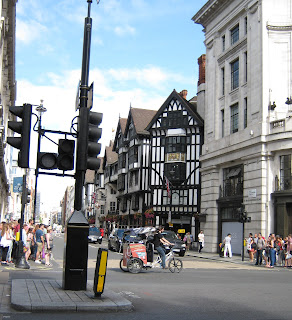 Before I begin to tell you my news, I would like to thank you all for your lovely comments on my blog posts of the last six or seven weeks.

All these posts were scheduled and the sewing down by the end of July - because I was going away during August and the early-ish part of September  A long way away, the other side of the world.  And I really did not want to advertise that this was the case, because not everyone on the internet is one of my sewing friends and some people are a little on the creepy side.  Enough said, that is not us.  I did let a few of you know, in case you wondered why I was not commenting on your blogs.

Regarding commenting on your blogs - I think I  have caught up with most of you this week. I was wanting to while away, but a combination of poor wi-fi in places and a tablet that refused to comment on blogs was not helpful!

Back to my news, DH and I visited England, Paris, Poland and Prague.  And this week I have been tackled by the lurgy (which I caught last week in Prague, but I think it is everywhere), and the paperwork and washing and shopping.  Which in turn, I have tackled.  Maybe tomorrow I can start sewing again :).

In the meantime, many of you are probably already familiar with the image at the start of this blog post.  If not, let me introduce you - this is the famous Liberty store in London.  Home to all the fabulous Liberty lawns, and other fabrics, and all sorts of delightful things.  I'll tell you more about this store later.

In the meantime, I shall just share pictures of my purchases of the lovely Liberty cotton lawn. And only one is for me - the other two are for my sister and mother respectively.

Next week I plan to have a simple top sewn - it was cut out before I went away, because I know that it is hard to get back into the swing of things post jet lag.  So I always ease back in with simple sewing.

And some of you are wanting to know more about my travels, so I shall post every few days to show you a little about  my time away.

It's good to be back and communicating with you all again :)


Posted by sarahlizsewstyle.blogspot.com at 1:25 PM