February 20, 2013
The last two days has seen me busy solving the casual/jean type pants dilemma.  After trialing two patterns that did not suit me, I decided to try a KwikSew one.  To refresh any one's memory, this is the pattern I am testing:

I've never used a KwikSew pattern before - I am not sure why but I suspect it was because they were not available when I started using commercial patterns.  I hastily drew out my size - XS bottom for and M for waist area (I'm a straight up and down sort, so charmingly (I don't think!) called rectangle by image consultants). I even more hastily cut them out of a piece of poly cotton I had lying around - it won't be used for anything else, and used even more haste in sewing them together. A quick try on and Lo! they work. 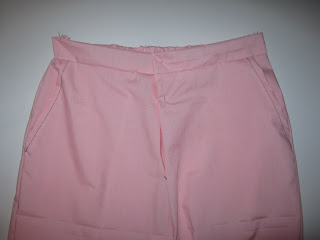 I'm going to make a pair in cost effective and serviceable cotton drill.  That way not much is lost if they don't work out quite as well as I want them to - but probably quite good enough for going to the supermarket and for wearing around the house - which is what I want them for.  My old ones are looking very sad and sorry now, so anything has to be better than them.

While out and about today I stopped and had a coffee at a cafe and watched the world go by for a short while - more specifically watched posteriors in pants go by.  I tried to be discrete, after all, it is rude to stare, but this was research for my pants project, so I rationalised that so long as I was subtle in my glances, no harm would be done.  I did see lots of pants with lots of posteriors that do not quite fit, and posteriors in pants of all shapes and sizes.  Some pants would  fit rather too well.  I am  not sure that tight jean cuts are altogether flattering on some people.  My earlier pre-tests were certainly  not flattering on me but I am optimistic that at least I will not be showing off parts I would rather not have the world see in this style of trouser.