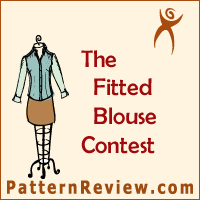 I have been working on  muslins for this blouse over the last two weeks - I needed to make two muslins as I altered the pattern quite a bit, and I wanted to make sure that the final blouse would work.  Especially as I will be posting a picture, not just here (amongst my blog friends) but on Pattern Review as well - my first posting there - so I am a little anxious about that :).

This is the blouse I am making - a fitted  and wrap tied blouse.  It has princess seams at the front and back and a front dart.  It also has a collar - and the contest does ask for a collar on the blouse.

I planned to use a rather heavy jacquard and use the longer sleeved version of the blouse.  I changed my mind though, after dreaming in the wee small hours of the morning, how nice this blouse would be in a silk organza (well, I was dreaming!).  When I woke up, I remembered I had some white pinctucked voile in the stash.  I had long considered it a mistake, but I thought that it might work for this. 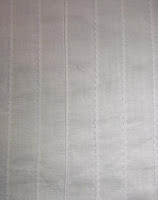 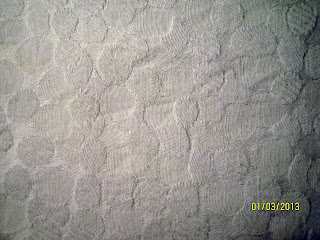 The photo on the left is the white jacquard - I decided that this fabric would be better in a button front blouse, as I discovered while making up the muslin, that stiffer fabrics tended to bunch a little over the tie belt.  I also thought that if there were any fitting problems, that the voile would sort of fold into itself a bit and look okay.

I also have lots of white t-shirts and camisoles that can be worn underneath this blouse - and the blouse can dress up these plain tops.

I trimmed the seam away on the right  side but left an amount to turn under at the opening.

As flat fell seams turn in one direction, I had to cut the seam horizontally on the left hand side.  This will allow me to turn the seam over.

I turned in the seam allowances around the opening and flipped the left seam over the right, turning it under, to make the flat fell seam either side of the opening.  To stop any fraying, I used a small amount of nail polish at the top and bottom of the opening edges.   Carefully and lightly applied, I find it better than Fray Stoppa.  I always find Fray Stoppa washes out.

This is the opening on the right side of the blouse - and the flat fell seams look okay.   So far, so good.  It also shows the shaping of the blouse - which is one of the criteria of the contest.

The back view also shows neat, shaped and fitted seams.  The fitted shape is also evident on the sides of the blouse.

Just before trimming and finishing the front and back princess seams I pinned the respective pieces to my t-shirt and had a look to see if everything fitted reasonably well.

The next step is to add the facing.  I used a firmer weave cotton for the facing (interfaced) to add some stability and holdability to the long front edges:

The collar will attach to the step of the facing - after the side and shoulder seems are sewn together. Again, I used a firmer weave cotton for the undercollar and the neck side of the collar band.  I interfaced the voile sections of the collar and collar band to give them some definition as they will be on show:

Not far to go now, the collar is made, and the sides and shoulders are sewn. The blouse is checked for fit at this stage before the seams are finished:

The fitted shape of the blouse can be clearly seen - I have raised the waist shaping slighly at the side waist as I am short waisted.

Now for inserting the collar:

I am not sure that I liked the way the collar was attached - if I make the blouse again, I will be inserting the collar band into the facing, and not over the facing.

Now for the sleeves:

I have done a double hem on the sleeve, and made it half the width of the facing, tie band, and planned bottom hem.

As the voile is lightweight and see through, I had to decided on a suitable finish for the armhole/sleeve seam and decided on a bound edge.  I also thought this would give a little more body and push to the sleeve head area.

Now I am ready for the last stage: 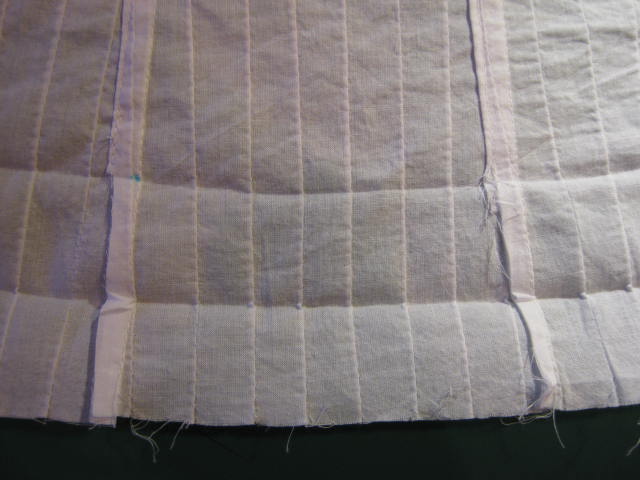 The hem at the bottom.  I also have the edge stitching on the collar to do, and the top stitching along the two front edges.  I will be doing a "twin needle" effect hem as I think this will compliment the flat fell seams.  I tend to use my big old machine which does not take a twin needle, but is my favourite machine, but I can sew straight seams well.

As soon as this is done, I'll be taking a photo of the finished blouse.

I suspect that will be tomorrow, as it is getting later here, I have dinner to cook, tidying to do, and then the hem.