June 12, 2013
If there is one thing I don't like about blogging, it's all the pictures that you have to take of yourself wearing the garment.  It really does seem a little self obsessed.  And then, when you have downloaded the pictures, you find that they are all blurry - which you couldn't see on the little camera screen.

This is my new polar fleece jacket - I needed something to wear at places like the supermarket.  I wanted a robust sort of fabric and one that would stand up to non too precious sorts of use. Something I wouldn't have to worry about, and something that would stretch and move with activity.

That's the photo's of me mostly over with  - now on to the star of the show, the jacket itself:

I used Simplicity 4032, a pattern I had in my stash. This is an unlined jacket.  Polar fleece was one of the suggested fabrics.  I made version B without the ruffle front, and made the collar a little narrower - I used the collar from Version A as this was narrower than version B's collar.  I also wanted pockets so I added them from version C.
I had already done a muslin so I knew the jacket would fit.  The jacket was straightforward enough to make, but the main problem for me was how to deal with the seams.  Polar fleece has a pile and if pressed, this disappears and the seam allowances press through.  I decided to trim one seam back, and flip the other over.  The flipped seam was over locked.  Then I stitched the flipped seam down.  This gives a flat fell seam look on the outside - and the trimmed seam gave a slightly ridged appearance.

The facing also needed quite a lot of thought - I had to trim the SF/Front seams and tack them down, then lay the facing piece over this, tack it down, and then top stitch ( I had over locked the facing seam).  Then I stitched in the ditch to keep the trimmed seams in the top stitched channel to give the ridged effect.

Everything else was straightforward, except for the buttonholes - I omitted these and opted for press fasteners and decorative buttons instead - the reason why is here :http://sarahlizsewstyle.blogspot.com.au/2013/06/how-not-to-ruin-jacket-at-last.html

I also had to attach the pockets last as otherwise the front facing top stitching would have passed through the pockets.  This is the inside:

The other problem to solve was how to finish the sleeve/garment seam - two layers of bulky polar fleece do not really happily serge with my domestic serger.  So I decided to use a satin binding instead.


Now the obligatory shots of me wearing my me mades - and not only the jacket but also the trousers are me mades :)

I'm sorry that the photos don't show all the details well, but they do give an idea of the shape and overall look. 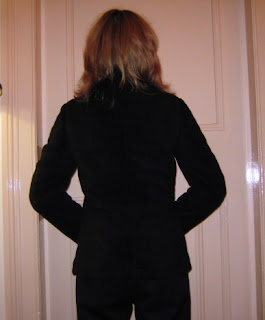 This jacket was a little tedious to make because of the way I finished it, but it has been worn pretty non-stop since I finished it yesterday.  I like it ( I really like classic clothes) and would love to make another version in a better quality fabric in due course.

That's why I want to use my stash up - so I can build a new and better one.

This was also a stash busting project for the 2013 Style the Stash Sew A Long:- www.stylethestashsewalong.blogspot.com