A Striped Pair of Pants for Scary September

My first project for BeaJay's Scary September challenge is finished - already!!  I expected to have real problems with this project because not all trouser patterns suit my linear body shape (well, most of the ones I have tried have not), and also because I am working with stripes. Double Trouble.

I am so excited by finishing these pants that I am forgetting my manners - if you want to find out more about BeaJay's Scary September visit: www.ontheroadtosewwear.blogspot.com.  You'll find all sorts of people tackling all sorts of projects that have scared them

The pattern I used was Kwik Sew 2960. It is sized for stretch fabrics, and is a fairly ordinary, classic line pant.  I decided to start with this pattern, fully expecting to have to either:

1. Muslin my way through an entire collection of patterns or

2.  Use up my substantial stash making lots and lots of muslins and trying to tweak them to change them to work for my small hips and thighs.

Turns out to be a well spent $1.00 (which almost makes up for the small fortune I have spent on patterns, but that's another story...).

I did make a muslin out of a piece of tough old stable knit that I found in an op shop but I was so keen to get this post up to show you my pants I forgot to take photos of  the muslin. Suffice to say you wouldn't have seen much, because it was in black.

I thought the fit was good enough for now, and that I would proceed with the main job - otherwise I would put it off in case I ruined it - you know the sort of negative stuff we engage in sometimes.

So, I plunged in, I took the scary jump.

The first problem I encountered was that the fabric was skewed - you know how the warp and weft fabrics can distort.  You are supposed to straighten this as the skew can affect the hang. 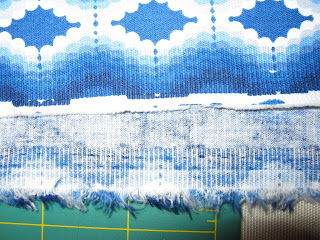 So my husband one end, and myself the other, we tugged and pulled: 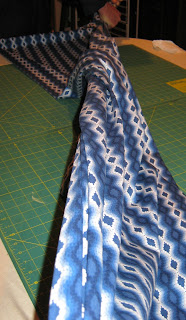 To very little avail.  So I just decided to cut anyway.  And hope for the best. 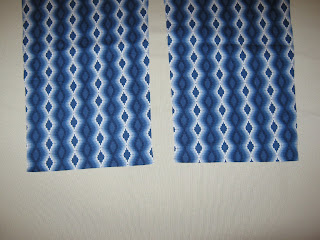 I decided to fold in half ( it was the end of the day, I had dinner to cook, I had been busy doing chores, and I was grumpy and fed up) - and this may have not been a good idea as the skew is evident - see above. 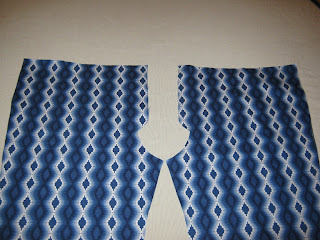 I have placed the lengthwise stripes very well - I had decided that this was the dominant visual line to work with, so I was less upset about the slight horizontal squiffiness.  Still, it would have been nice to have got it PERFECT.

A good night's sleep and I was ready to move on...

The next morning I had one of those light bulb moments: 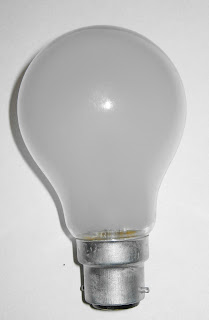 I thought that these pants may work as elastic waist pants - I do like stretch pants with a neat band at the top.  Most are too big and baggy, but I thought that if I made the back darts a little smaller, that the stretch would well and truly fit over my small rear and hips.  Also, a neat band at the top, with very little fullness would be less bulky, I thought, than a thick interfaced waistband - which over the centre of the tummy would be , at the seam edge, eight layers of fabric, plus a trouser hook, and  a zip down the tummy.  Not a good look. And if the band is neat enough, it can be worn out - although I am likely to always wear a top over the top of a band, as I am shortwaisted.

So another muslin was needed from the op shop black knit that looked, smelt and handled like old rubber.  And yes, the pants  slipped  over my hips and bottom easily.

This  slight change of plans (I tend to do this mid course if I see an opportunity to solve one of my other sewing problems) meant I cut the zip allowance off and stitched the front closed.

I also worked out that I have a very long rise - so I lowered the crotch twice.  Then I wondered if the shape was anything like that of my crotch curve experiment template: 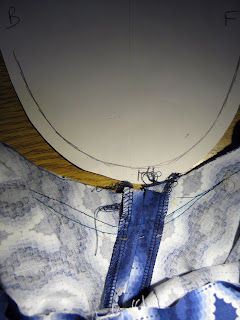 So I placed it over the new proposed stitching line - the gold tacking that you can see above indicates where this is. 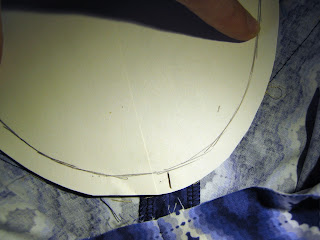 A perfect match!!!  Amazing - this was an experiment done as a bit of fun - and because I am an immersive visual spatial type, I tend to think outside the square - following the bouncing ball A,B,C in a linear process is not the best way for me to learn.

(For those of you who want a chuckle, the crotch curve posts start here - not a technique found in sewing books though! ):http://sarahlizsewstyle.blogspot.com.au/2013/03/pants-crotch-experiment-part-1.html

Now, the finished product - here is the waistband: 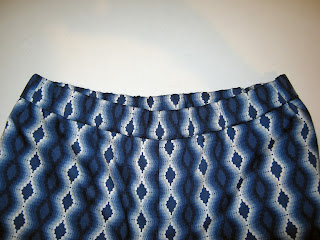 The front view (and I have cut off my feet in this photo - and for those of you with good eyes you will seel I corrected the lopsided pattern at the hem - I have a slight scoliosis, and I often shorten one leg of trousers - so the pattern line at the hem matched perfectly in the end - a serendipitous mistake!)

And the side view (never my favourite):


And the back view:

Okay, still a bit baggy under the bottom, but not nearly as bad as some of the patterns I have used.  I also suspect it is something I am going to have to learn to live with - I have such long, slim limbs that this is not going to be easy to rectify.  With this patterned fabric though, I don' think the flaws matter.  For plain trousers I will have to rethink and tweak out some of the fullness.  I did do one tweak in the back of the leg, but I think in fact I need to do a very sharp angular fold that goes up in a diagonal line, not across.  A job for another day, but for now:

I am very pleased and will love wearing these pants (you were right, Mary!).

As it is still early in September, I will have to think what else I need to tackle for this challenge.