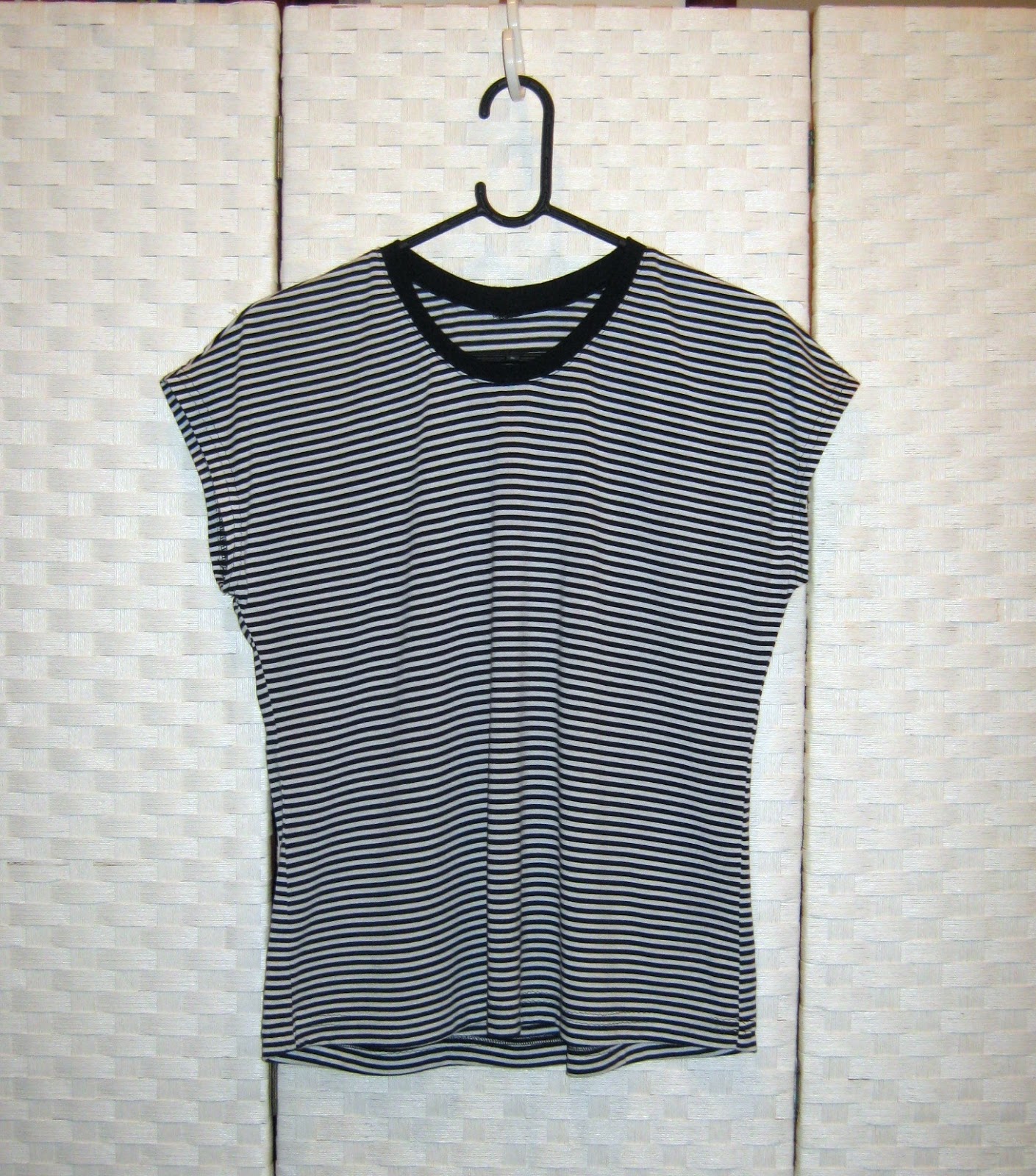 I've finished my little striped t-shirt top.  I'm very pleased with myself, I can tell you :)

As you can see from the folds in the picture above, the knit fabric I used was very soft and drapey.  It is a cotton -polyester mix, from Japan, and it really has a nice handle and feel to it.  It wasn't cheap and I only had 70cm (.8 approx of a yard) - so I had to be very careful

I deliberately chose a very simple line for this top for two reasons.  One, the drape needs a simple line, and two, I haven't sewn knits so I thought I would eliminate sleeves at this stage until I have learnt how a knit behaves.  I used New Look 6216: 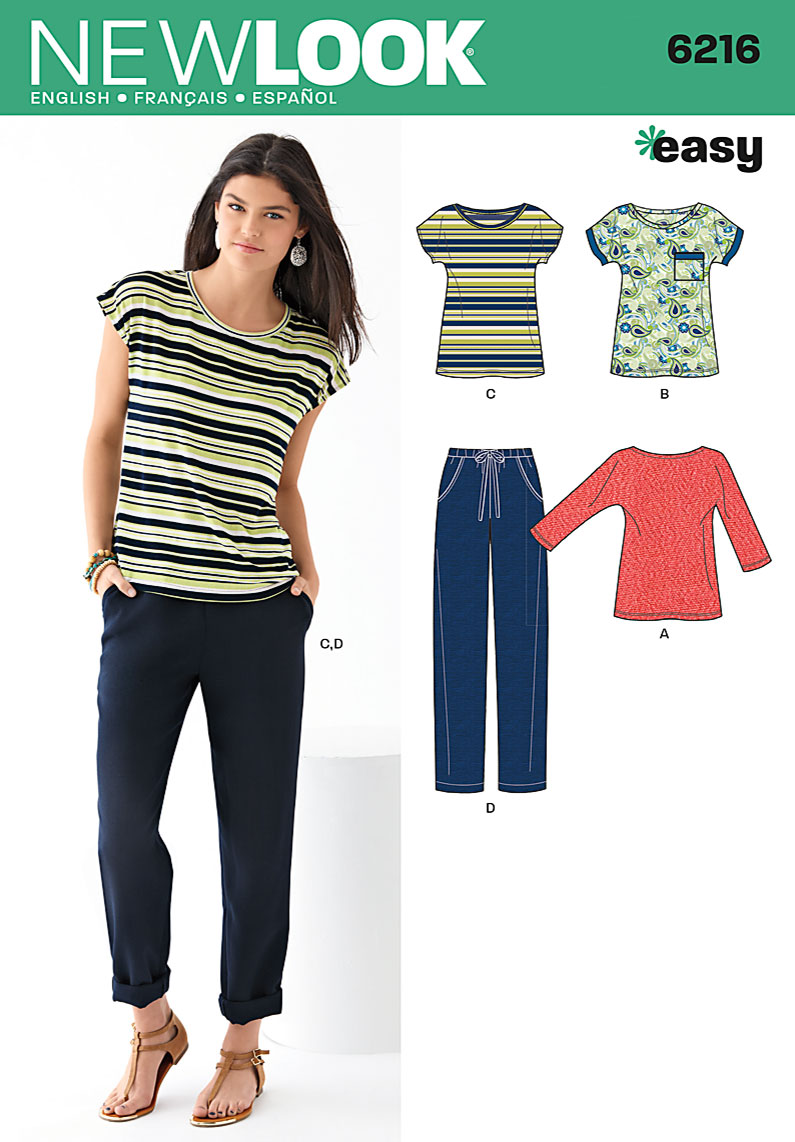 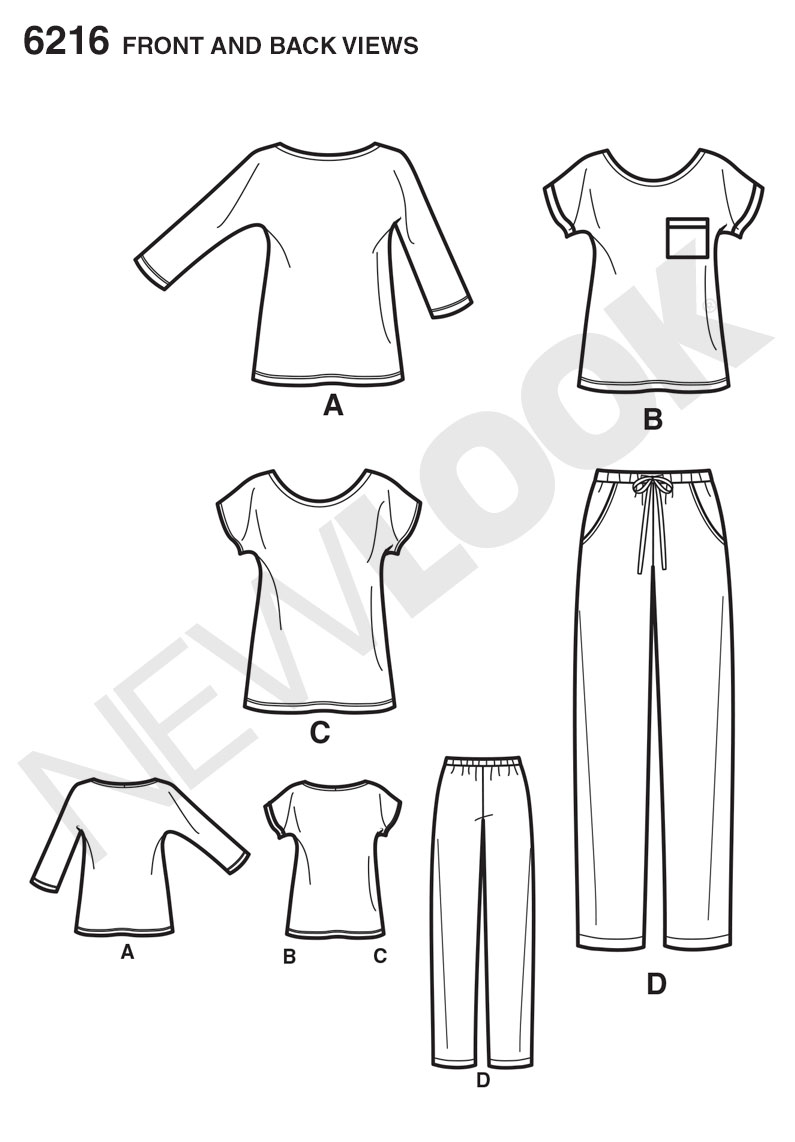 The pattern is slightly A-line and has a wide neckline.  I decided to trial it first in a piece of knit lining fabric.  This has the recommended stretch, whereas my stripes were not quite as stretchy as the pattern suggested. 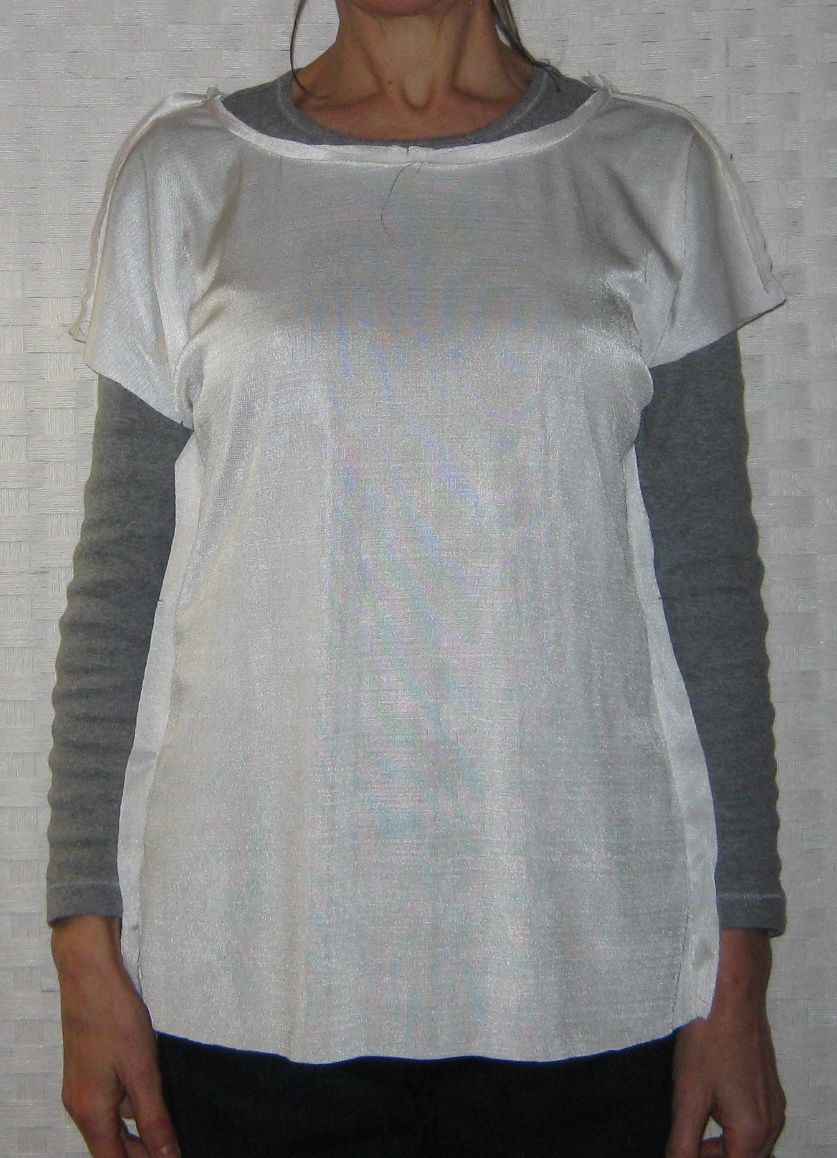 The pattern is designed with a lot of ease.  I cut size 10, but then ran the side seams in to size 8.  You can see my quite large seam allownance in the muslin above.  That is why!

The neckline is far too wide for me - it will show bra straps and slide around on my shoulders, so I decided to raise the neckline quite a bit at the shoulders and curve that into the current midpoint of the neckline on the front and back.

Then I cut my fashion fabric out.  It wasn't easy because stripes have to match.  Usually people match at the sides, but I decided to make sure the stripe was fairly even at the bottom - because this is an obvious sight line.  The side seams are hardly going to be visible, but if the stripes are wrong at the bottom or the neck that is going to be very obvious.  So the fabric had to be pinned down in all directions.  Here is the result :  stripes are horizontal as they should be- the hem is curved and that shows below the ruler.  Not too bad: 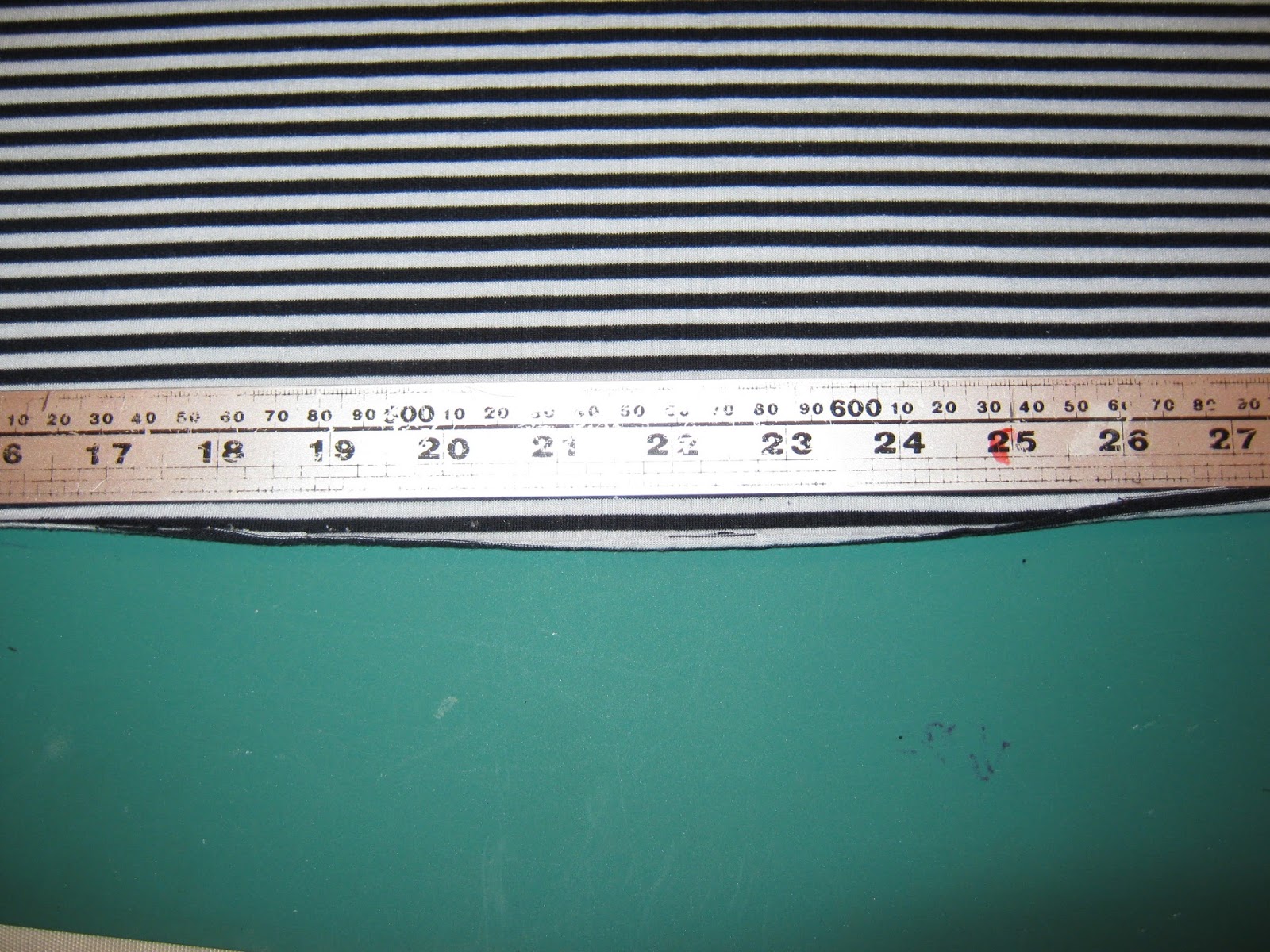 I had already put ballpoint needles on my overlocker and main machine.  I know a lot of people only use the overlocker for knits, but I decided to use a very slight zig zag on my main machine as I was not confident about just serging at this stage of my knit sewing career :).

The first job was sewing the shoulder seams and then attaching the neckband.  As I had altered the neck, I had to make up the proportions of the neckband.  I decided to use a bit of black knit that has been put to one side as a contrast band.  This was because I thought it would look better, also I thought the stripes may not fold in the right place.  And I really didn't have enough for the knit band without piecing it, and I didn't want lumpy seams in strange places.

I carefully pinned the band in place with what I thought was the right amount of stretch.  I used Mary's suggestion of joining the back seam after I had sewn most of the band in place - except for the back.  Then I stitched that, and then the remainder of the neck seam.  Then I overlocked the edge so it looks finished.

Then I edgestitched, with my slight zig zag stitch  close to the neckband on the garment side, with the overlocked edge folded down.  This holds it in place: 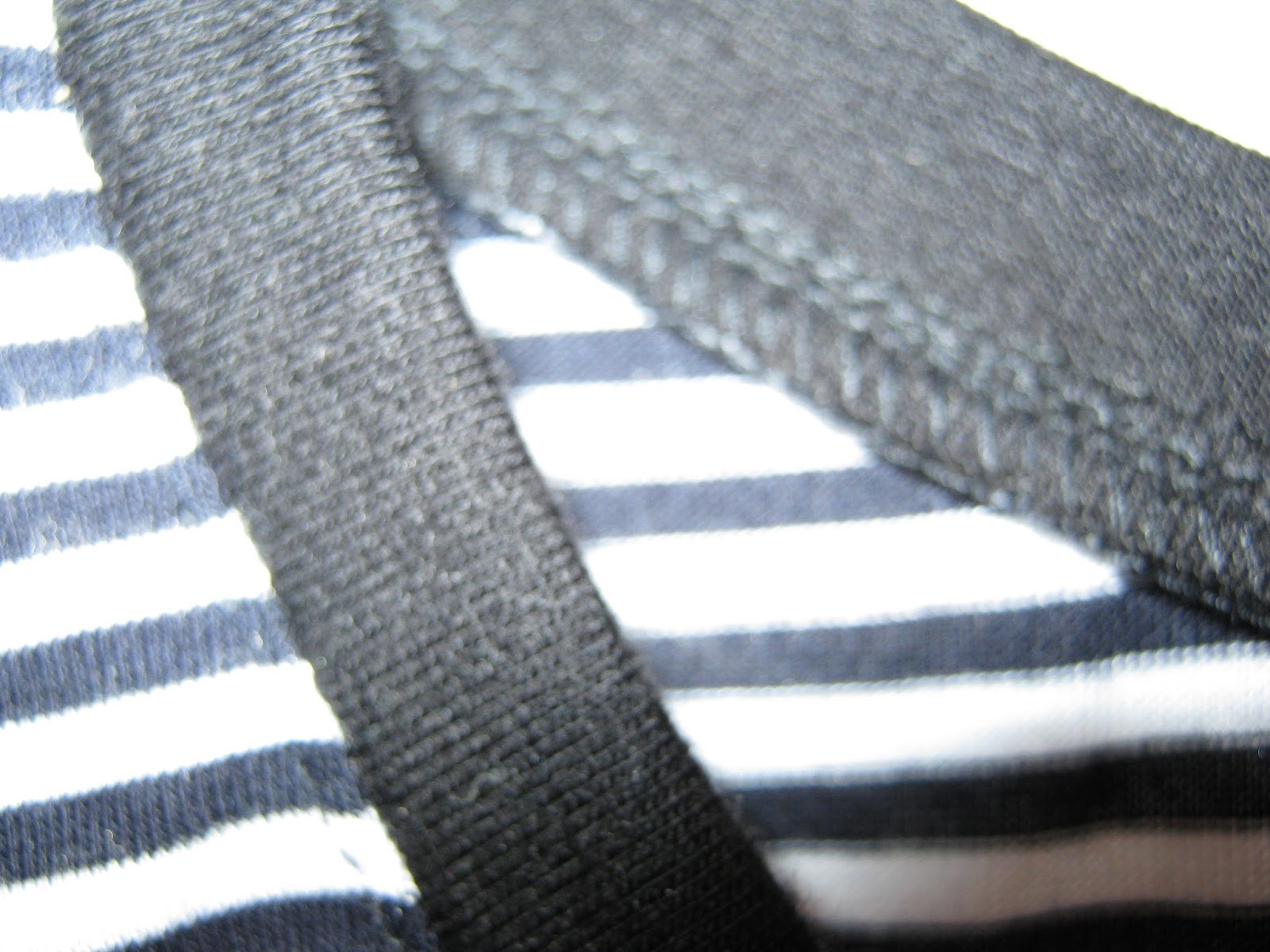 Then it was a simple job of sewing the side seams and then I overlocked them.  Then I finished the hem edges of the sleeve and bodice edges.  I turned the hem up and stitched it in place with two rows of slight stretch stitch: 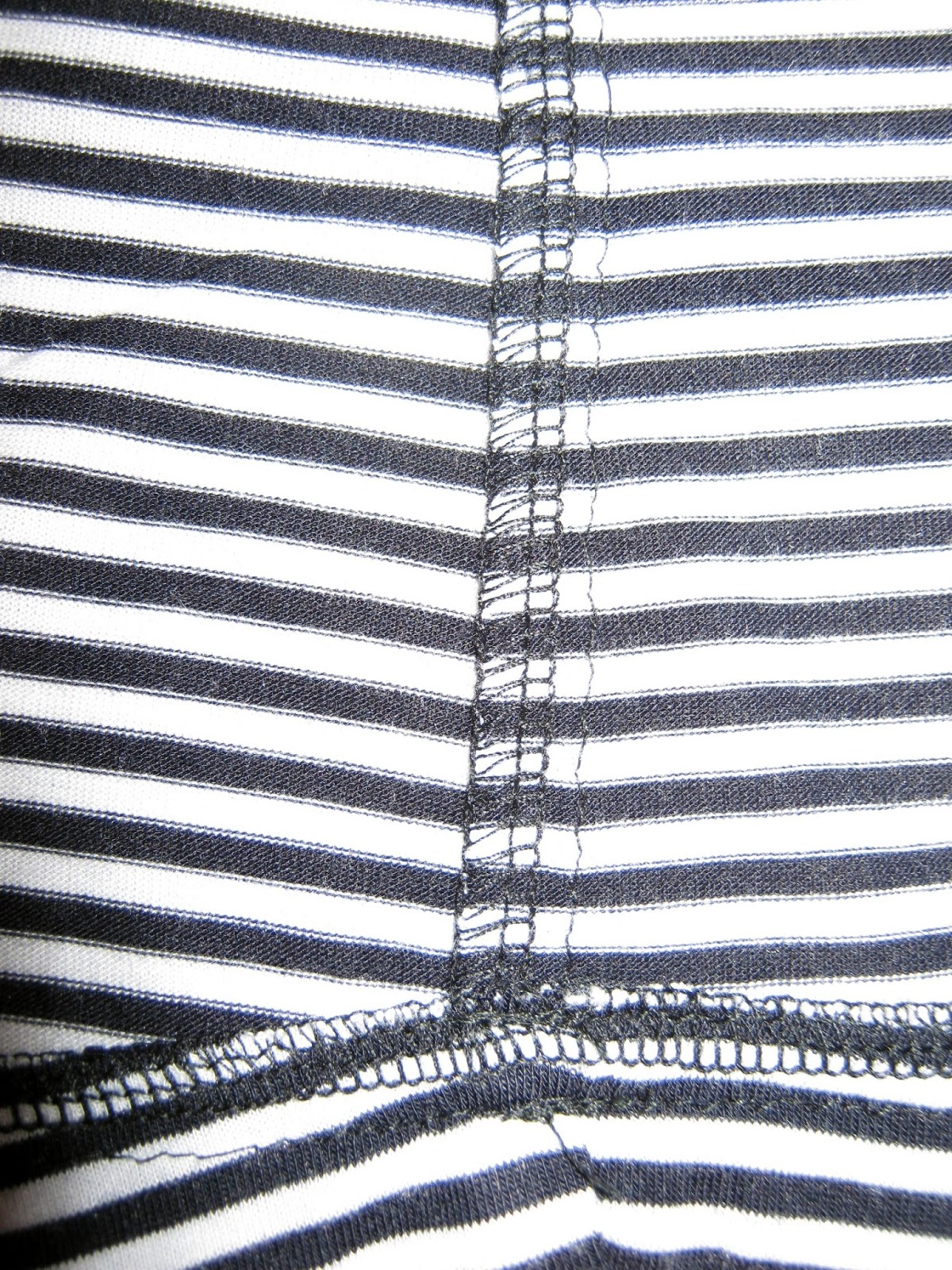 I chose this for the hem because I do not have a twin needle - a twin needle finish has inbuilt stretch.  I have to go around twice with one needle.  So I needed to use the stretchy zig zag stitch, which I quite liked on the stripes: 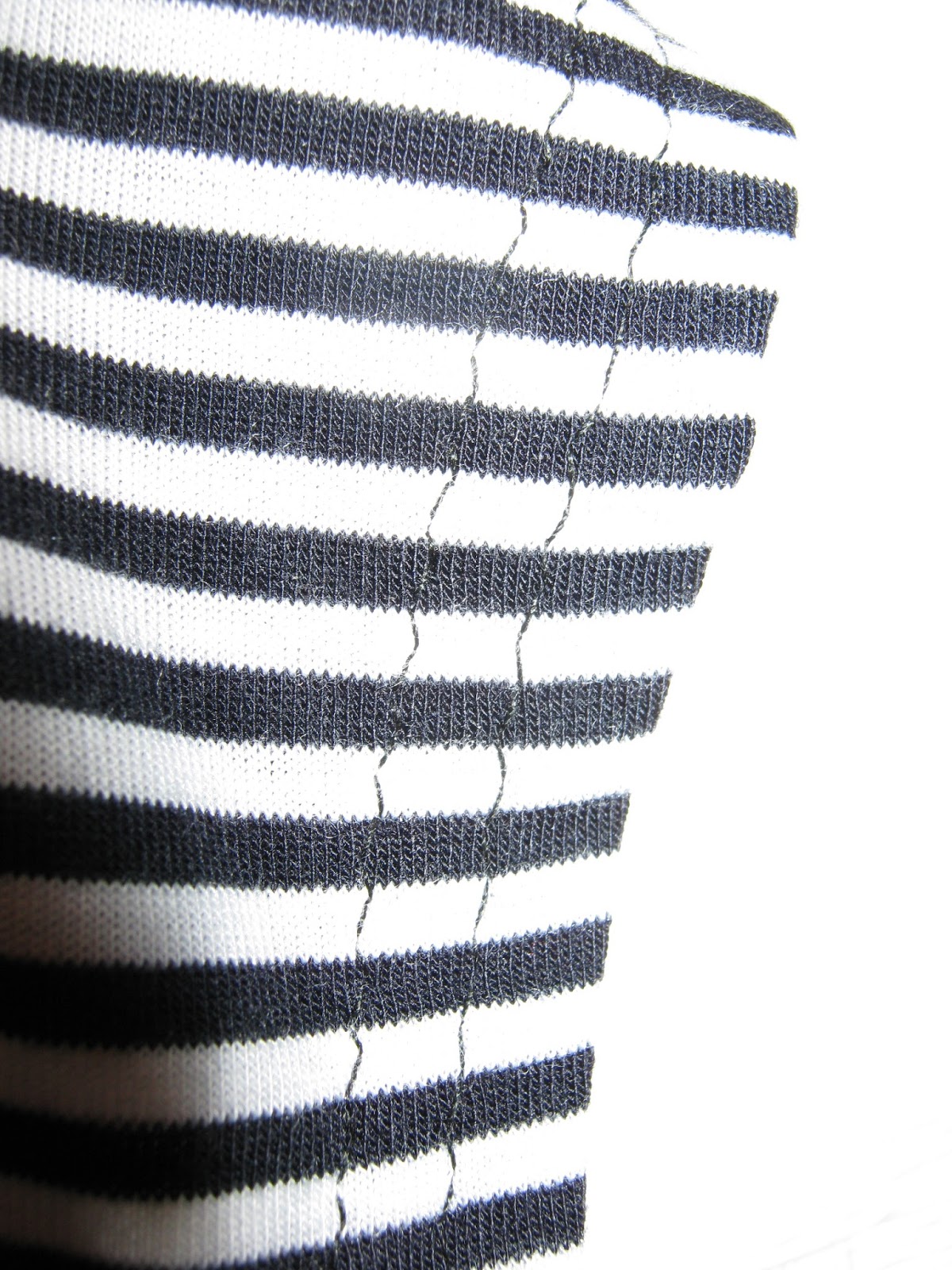 Okay, now for the shots of me wearing the t-shirt: 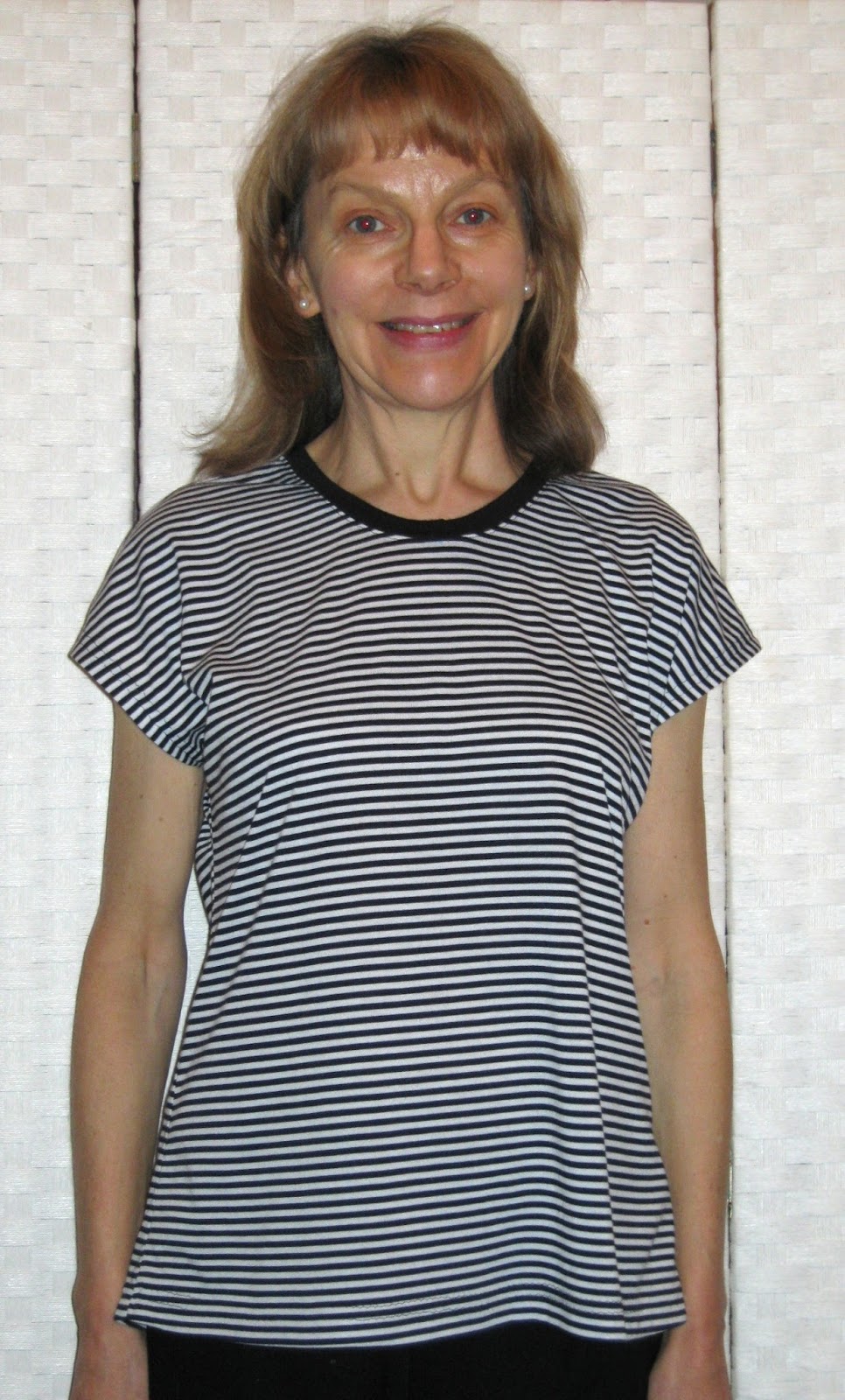 I like it - I know there are slight drapey folds from my modified neck, but I don't think they detract, especially when I am moving - the top will have lots of movement in any case. 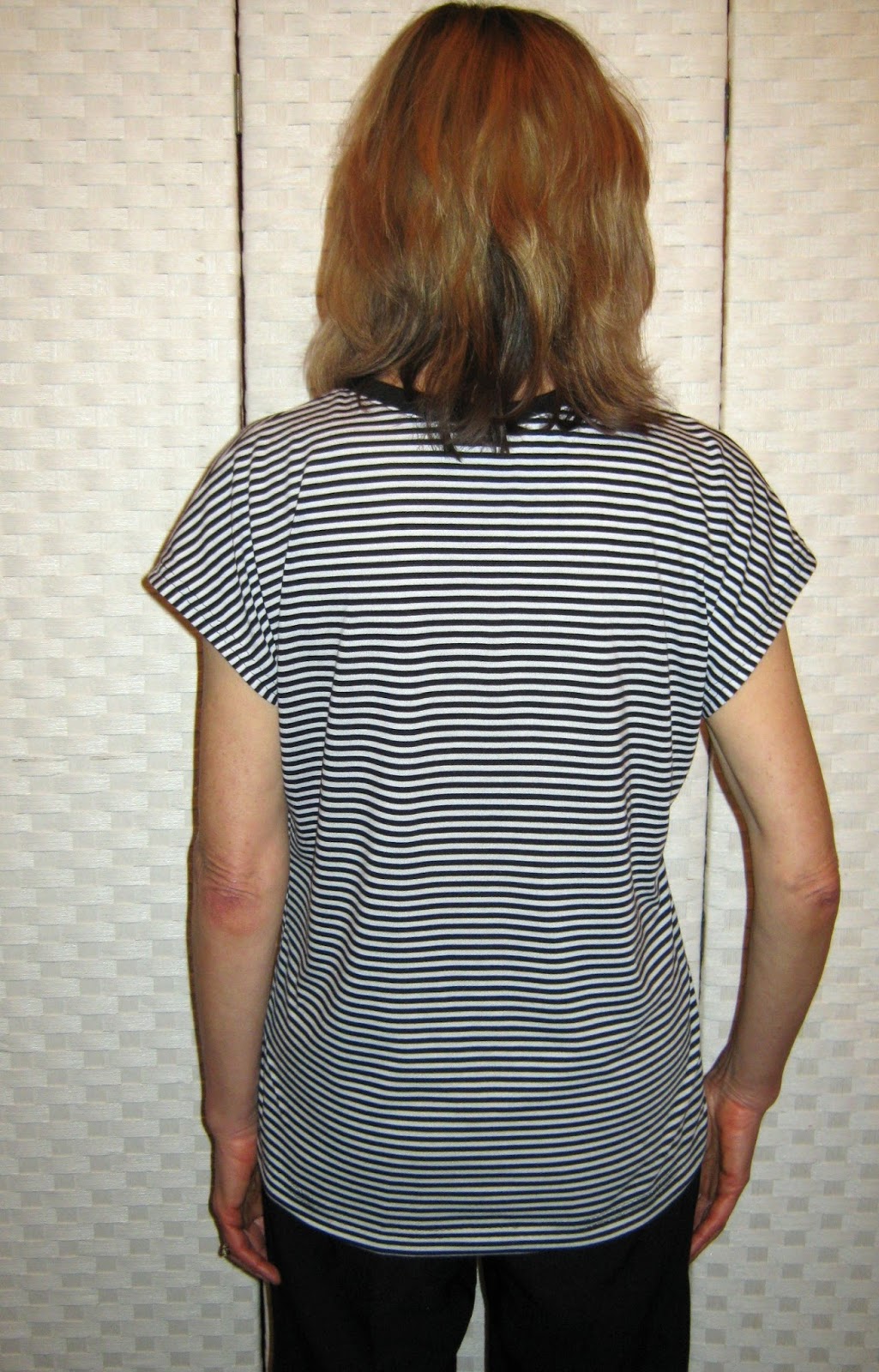 And one of me being more animated - my husband took these photos - I normally have to self time my own shots - and they are always a little out of focus, and you never quite know when to smile naturally.

I'll say goodbye at this point, because I think blogger is being a bit resistant about allowing me a line at the bottom of this photo.  But then I am stretching the friendship by posting larger photo's than normal :) 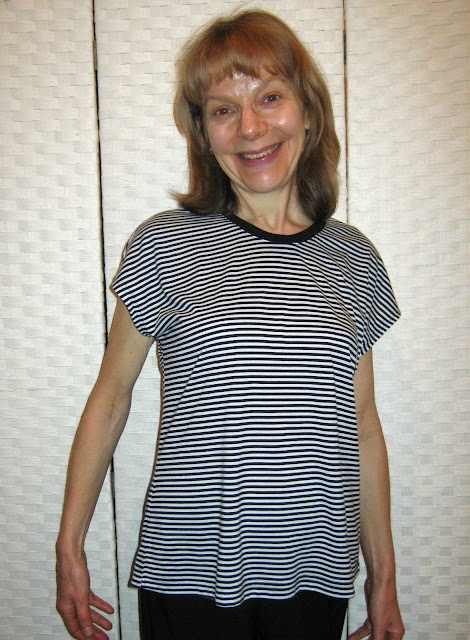