Showing posts from October, 2014
Show all

What's in the Pot? 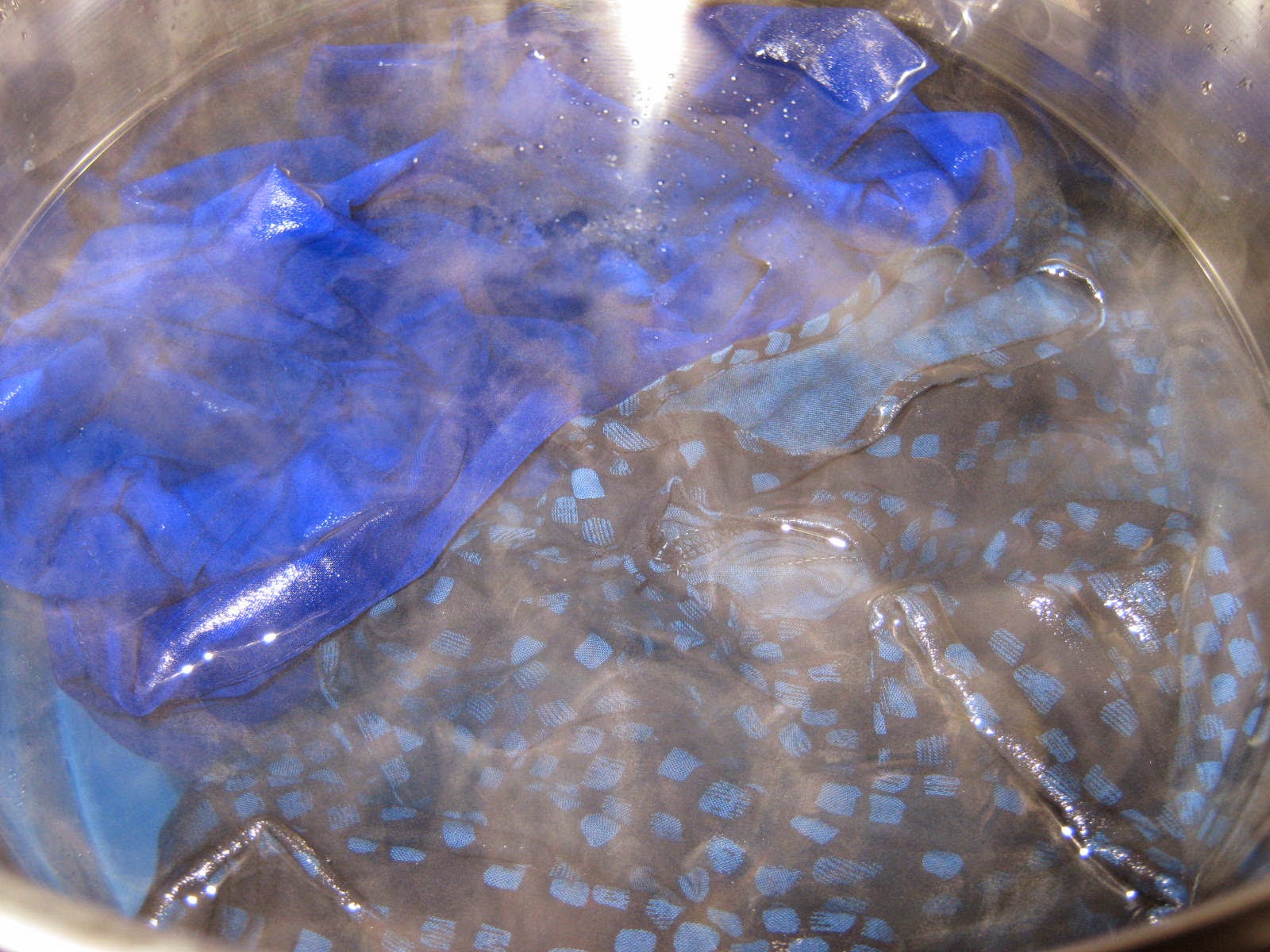 A few weeks ago I dyed a dress that was faded with RIT dye.  RIT claimed that the dye was permanent, and it might be, but it certainly wasn't colourfast.  I looked everywhere on the packet and on RIT's website but could not find any information to say that a fixative was needed.  Mary from Biblioblog kindly left me a comment to say I must use a fixative. The next day I was on the internet finding out all about fixatives.  Many products cannot be imported into Australia, but this product was available for delivery to Australia via fishpond. The product is called Retayne and it is for use with cotton fabrics only. It prevents colour bleed in dyed fabrics, whether from your own dying or from commercially purchased cottons.  It seems that it is used by quilters for treating patchwork cottons as well. You use 1 teaspoon per yard of fabric, hot water, and soak for 20 minutes.   So I fixed my dress and another garment as well.  The second garment bled on being immers
6 comments
Read more 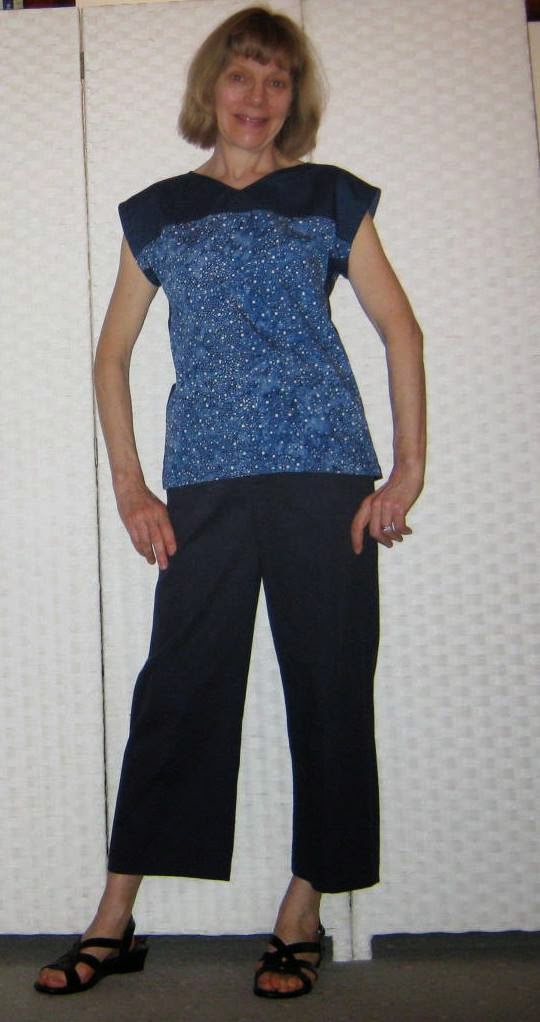 I have recently made a top from a dress pattern in an off white linen and cheesecloth -  you can see it here.  It was quick and simple to make, so I decided to make number 2 this week, which you can see above. The pattern I used was Vogue 1390, a Sandra Betzina pattern.  I've always thought of Sandra Betzina's styles as a little mature, but really they are quite nice.  Or am I getting a little mature?  Or is it a mixture of old and nice? That pattern appealed because I had a half metre of 112 craft fabric.  What on earth was I thinking, given this would nowhere near make a top, even for a small person.   Well, actually, I was thinking Prada, when she was adding this sort of print to denim jackets,  but I never got around to making that, and then I went off the idea.   Next,  I saw a little shell top in an  Armani Spring/Summer 2013 collection (I am not sure which of his two collections it was in)  that was made in a fabric with a pattern simil
37 comments
Read more

Do you hate alterations as well?

Do you hate alterations?  I do.  I would much rather make something from scratch than alter RTW garments.  Even if I have to do multiple muslins and have all sorts of sewing issues with making a garment.  Alterations do not appeal. I've had three shirts that have sat in my wardrobe for at least three years.  Unworn.  Why?  Because I don't like the cuffs on them. These are summer weight shirts, and I will never wear these with longer sleeves. So they have sat and sat in the wardrobe. Because I don't like doing alterations. But yesterday I did them: BEFORE: (I pegged the sleeve up to see if I was going to like the alteration or not). Two more: Not the nicest shirts in the world, as they currently are. But with shorter sleeves, I think I will wear these quite a bit in summer: They are quite good enough now for casual wear, and I feel so much better - sort of virtuous really, that I have finally done this tedious job. Do you hate
24 comments
Read more 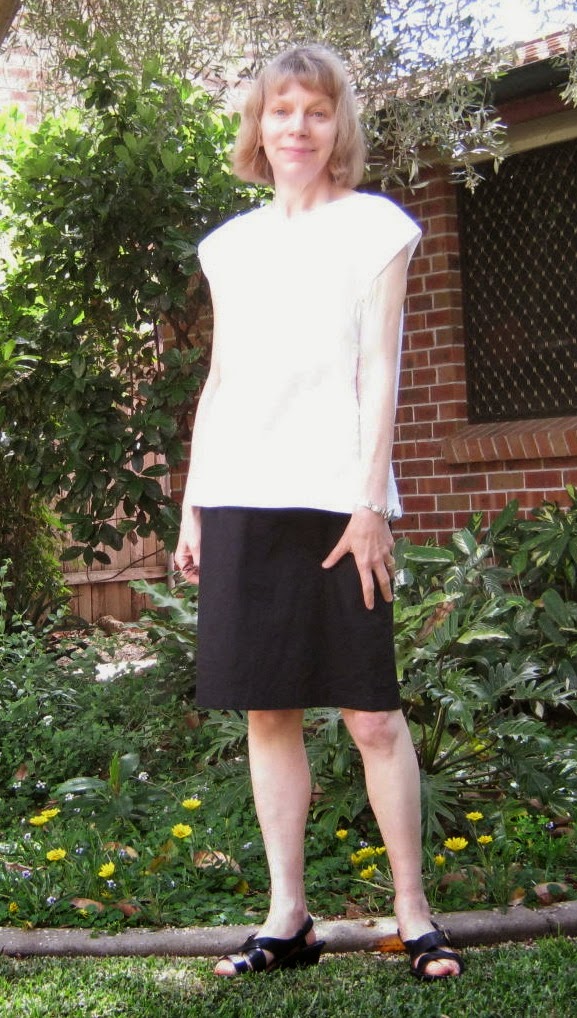 This week I made a little top; it was quick and simple to make and used up some bits of stash that had long annoyed me.  I mean, why did I buy 80cms of about 100 wide fine hanky linen?  It's been in my stash for a couple of decades, so I can only assume it was when I was paying a mortgage, and that this was on a sale table.  Still, what did I think I would make out of that??   I decided this pattern might just be useful to deal with this piece of stash:   Sandra Betzina Dress, Vogue 1390  I want to make the dress one day, so I decided that I would trial this pattern in a top first - that way, I could kill two birds with one stone.  For View A, I had just enough linen to make the yoke and centre panels, but I would have to put a small seam in the back yoke.  Easy.  I needed to find something in my scrap stash for the side panels and found some cheesecloth.  And I needed lining, and had an old dress lining (voile) salvaged and stashed for years, and other bits
44 comments
Read more

Last week I found out that the lovely Hana from Velvet Ribbon Sew had nominated me for the wonderful global blog hop.  Hana's sewing is exquisite - always very careful and she also shows you the inside of her garments, along with full details of how the garment is made.  Her posts are always so detailed, it is hard to believe her first language is not English.  She now writes her blog to practice writing in English, which I find amazing given that her language is so structurally different from English.  Not only is Hana amazing, she is also a very lovely, ethereal presence in our sewing community.  Thank you for thinking of me as kind - I do like to encourage other sewers, I think because I used to be a  nurse :) So thank you very much for nominating me Hana. And thank you for your lovely compliments when you nominated me in your blog hop post. WHY DO I WRITE: I write because I wanted to explore and experience  the world of sewing more fully.  I had enjoyed reading sew
16 comments
Read more

Relief Strikes!!   My final assignment has been uploaded today, so I can enjoy your blogs, blogging on my blog, and making sewing plans again. My first set of plans are to use bits of stash that are annoying me - they are not really big enough to make a whole garment with, but too nice to throw away.  I'm going to use a Sandra Betzina dress pattern, but  shorten it to make a top.   One view has pleats, the other view is plain - I'll be making that, as I only have 80 cm of 110 fabric - a beautiful fine linen - why I bought such a small amount in the first place is a total mystery to me now, but I can only imagine it was on a sale table for a very small price.  I've had it in the stash for a long time now - at least 20 years, so it is well and truly time for it to be used :). I'll have to find something else for the side panels and lining - I'm going to raid the scrap basket to see what is hiding in there that can be used. I have made the muslin -th
21 comments
Read more

Pants from the Past 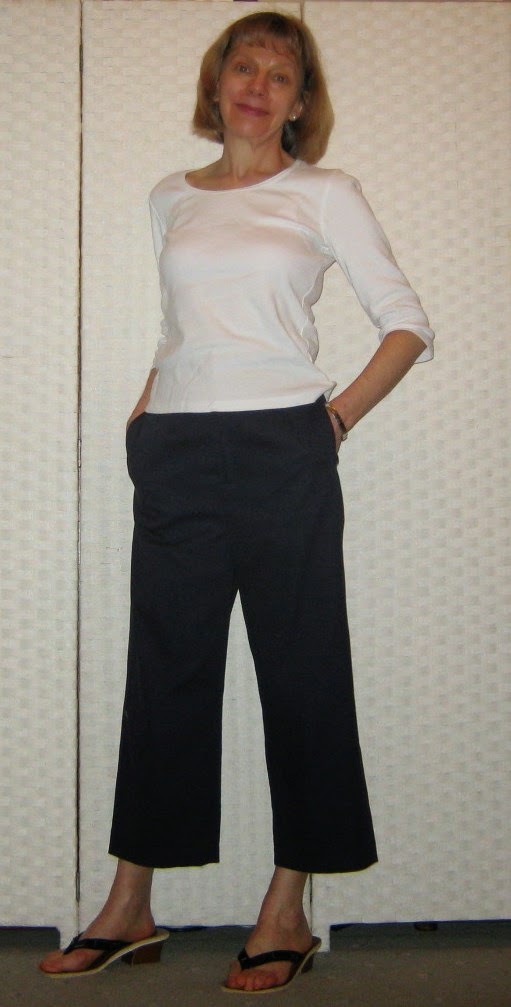 I have not had much time to sew this week so I have decided to post a pair of pants I made last year.  I did not have time to take pictures of them on me then, so thought today was a good opportunity to do so.. Before I do, though, I just want to mention that Hana from  velvetribbonsew nominated me for the wonderful BLOG HOP that is being enjoyed by our sewing community.  Thank you Hana, I'll do a post soon and acknowledge you again. Back to the pants! The pattern is Butterick 5687.   I made the shorter pants on the far right, bottom. I cut size 8 hips and size 12ish waist.  I did not need any other alterations - these trousers actually just worked for me! (I did make a muslin, of course, to check). The fabric used is a cotton drill. And there are pockets in the side seams - I made these from poly cotton poplin, as I did not want to add bulk. The pants come up to the waist, but that is what I like - I am a rectangle shape (not much difference between bust,
13 comments
Read more
More posts