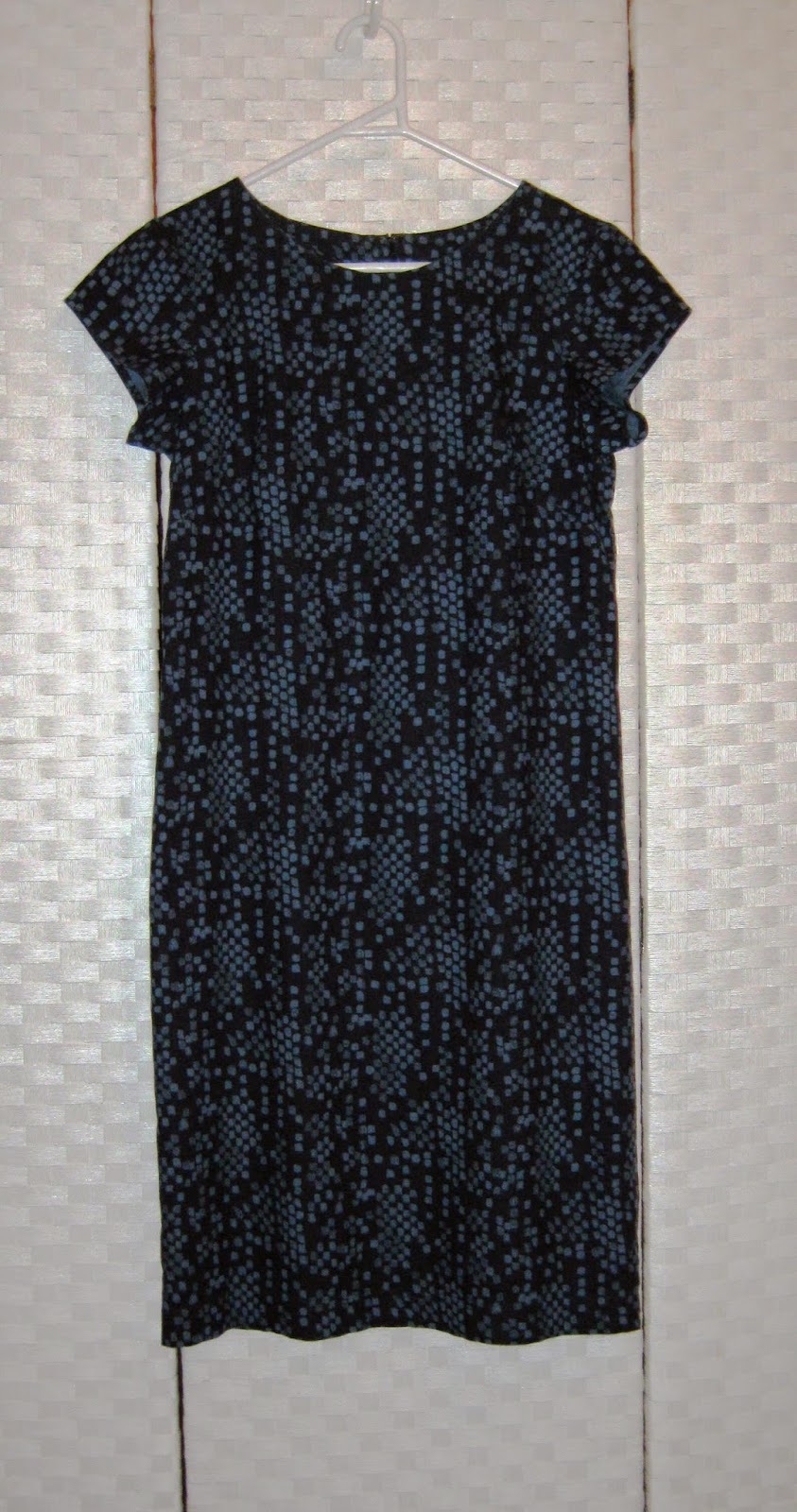 This week has been one of those inbetween sewing project type weeks, mainly because I am working on my last assignment for the semester - and it is quite demanding - the subject matter is all new and very important to understand.  On the plus side, I do at least find this assignment interesting:).

What I do in these periods is accept the reality, work out what my main priorities are and fit in sewing around that.  As the weather is warming up, I decided to go through the wardrobe to see what needed altering or revamping.  Two garments did, and two skirts that are never worn are going to the Op Shop.

The dress shown above was made last year from a craft cotton purchased at Spotlight.  This is the original dress:


I found this a really useful summer dress, but unfortunately the fabric faded quickly.  Spotlight craft cottons aren't good quality.  Luckily I bought the fabric in a sale for $4.00 per metre.  I could have worn the dress as a house dress, but I really like it, so I dyed it.

I used a Dylon dye in colour Jeans Blue: 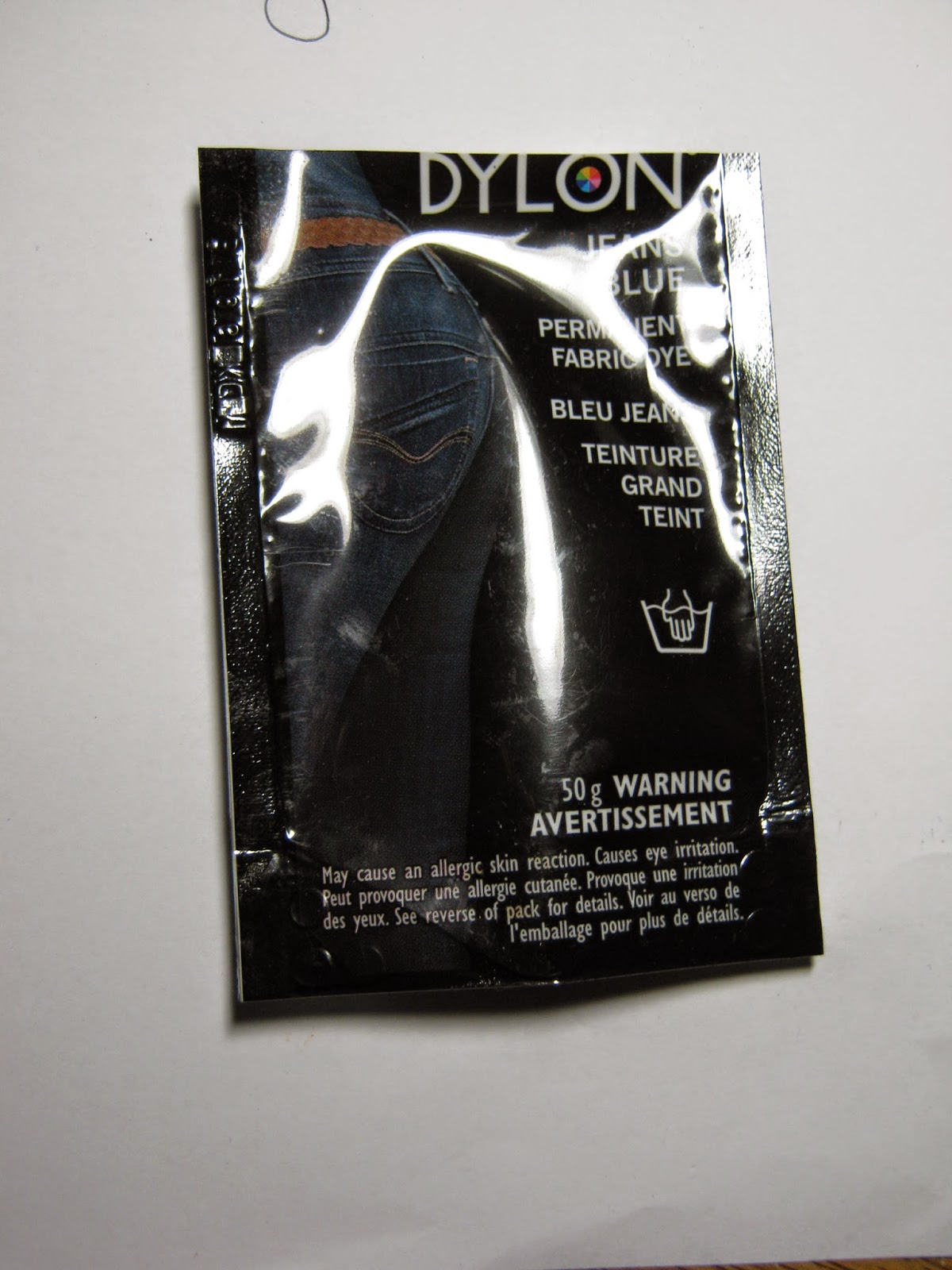 It claims to be permanent.  Now, I am a bit wary about dying clothes after my last Dylon dying disaster.  I had a pair of lightweight linen pants, black, that had faded.  I was visiting Adelaide in February, and Adelaide can get really hot then.  So I thought baggy black linen pants would be just right, with a baggy white top.  The mercury was predicted to hit 47degrees C, and did.  Now, I tolerate heat quite well - I don't like it, but I do know how to operate in heat, having lived in Perth and Alice Springs.  Not so the dyed pants.  When I took them off that night, I found my legs and pants were also quite black. Yes, black and streaky.  Mottled black.  All over.  Down to my ankles. Then skintone feet.  Not a colourfast dye it seems.  I decided to bin the pants and learn from the experience.

So I have been wary of dye ever since.  I decided to live bravely though, and risk another attempt. The fabric does look lovely in this shade: 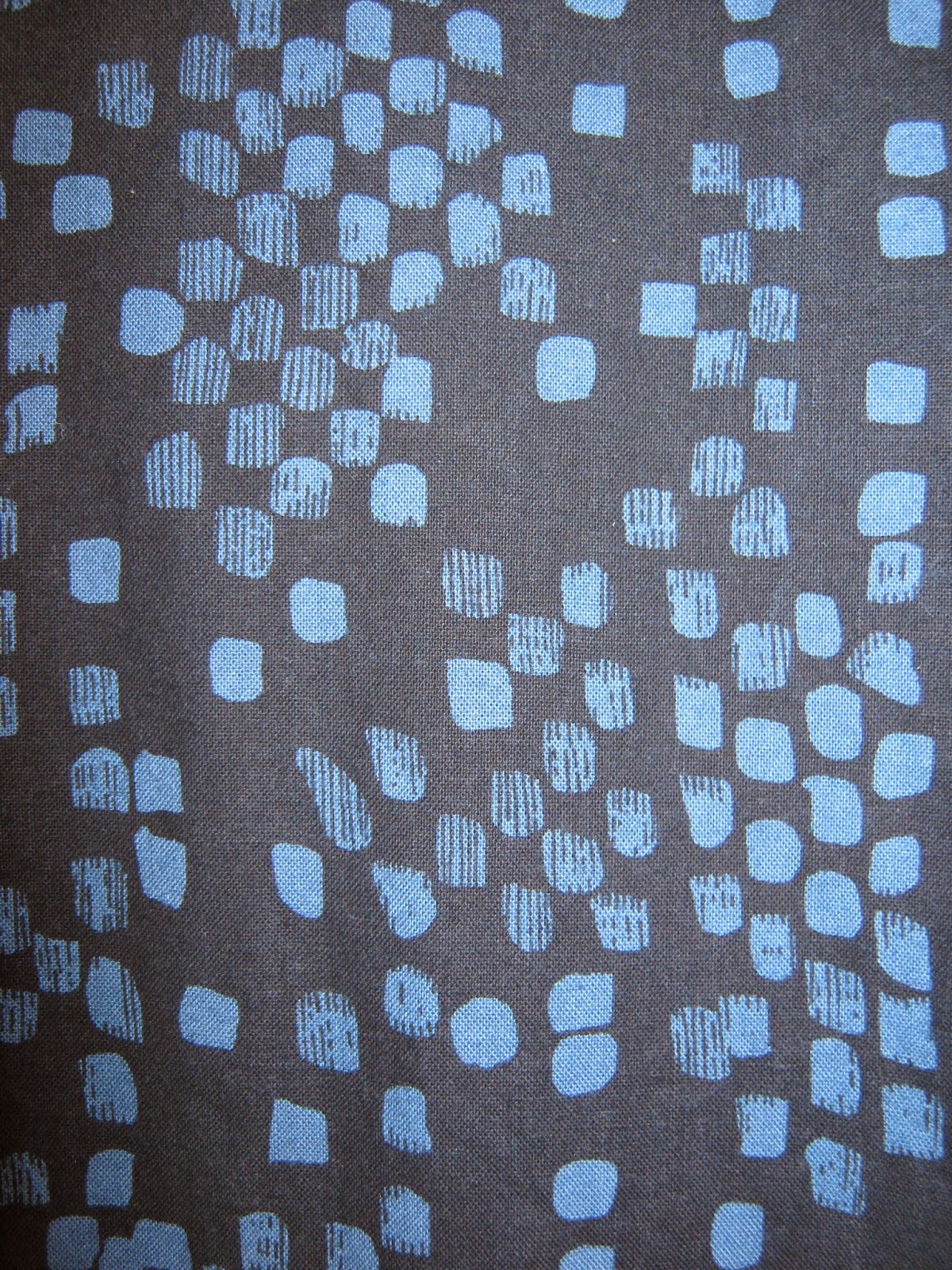 Now, although Dylon makes a big noise about this dye being new and improved and permanent, guess what?

It isn't colourfast. And although I scoured instructions and the website for any indication that a fixative was needed, there wasn't any suggestion it was needed for this dye.

So now I have a choice.  Wear black or navy underwear or don't wear the dress when it's hot.  Or sacrifice an old bra and do a testrun, or rather test whether the dress runs by wearing it for a test run, on a hot day.

Probably I'll wear black undies.  Which means I have to go on a black bra hunt.  Not my favourite thing.  I looked at what I would need to make them, and decided that making bras is not in my immediate sewing future. - one day, but it seems I need a stash of things like elastics, power net, hooks and sliders, shoulder straps, underwires, underwire casings and so on.

As dye is not cheap at $14.99 a packet, when I finished dying the dress, I decided to dye some fabric that had run when I washed it.  I purchased some black and white knit, and navy and white knit at Spotlight.  Not cheap.  I was miffed when the colours bled during the pre-shrinking.  $25.00 of fabric I liked down the drain, so to speak.

I had kept it, intending to use it for t-shirt muslins.  Then I decided it might look okay dyed.  So I used the rest of the dye tinting this knit.  The results are of course less vibrant, as the dress took up much of the pigment.  But this muted look is just right, and goes with the colour runs - it tones and blends them in nicely: 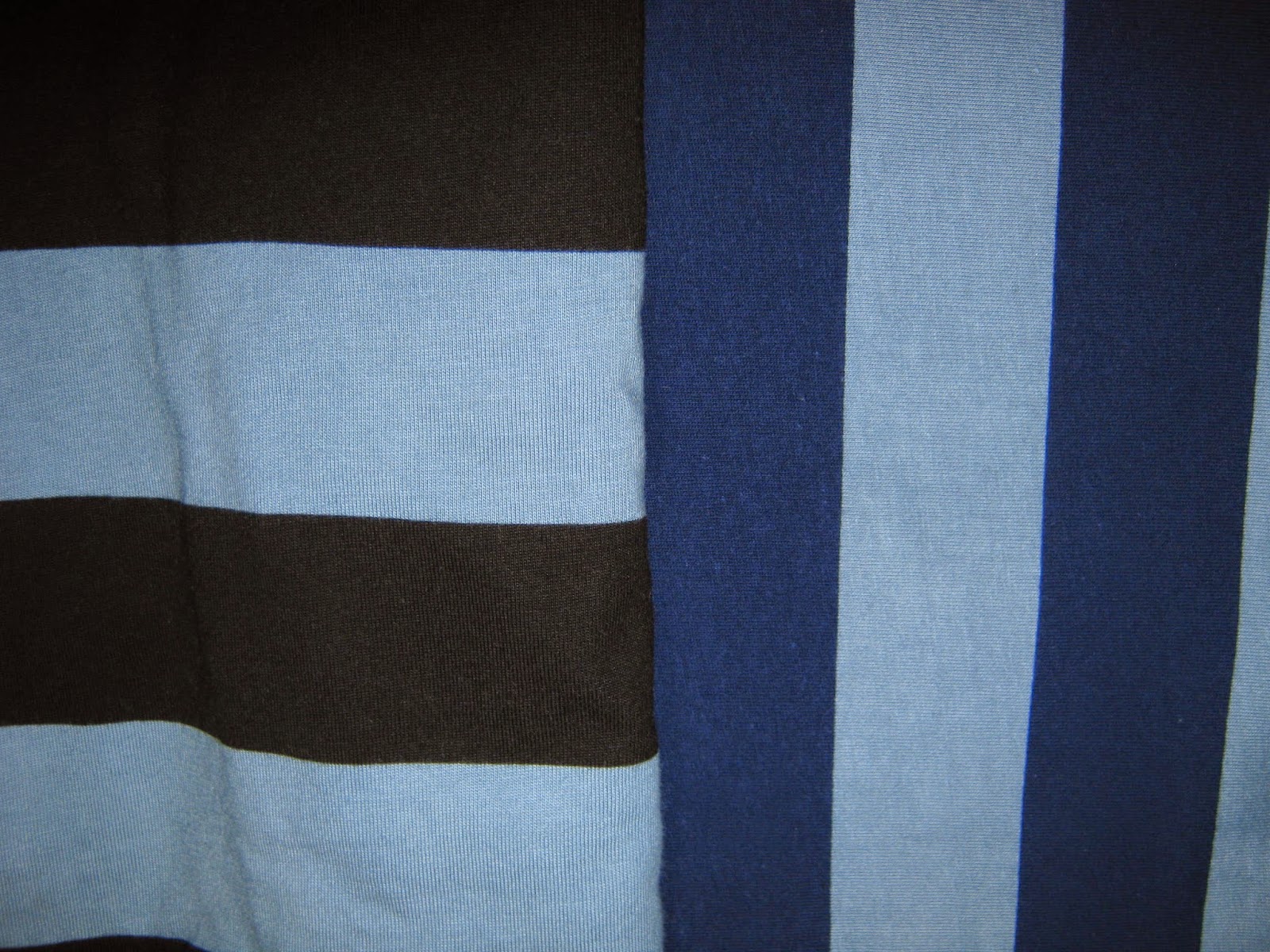 In fact, I think this colour is a great improvement and will suit me more.  Win!
*****
The other little job I tackled this week was adding pockets to a  RTW summer dressing gown I have had for years: While I like this dressing gown, I have never like wearing it as without pockets, where do you put tissues?  And tissues are a standard accoutrement for anyone,who, like me,  suffers from hay fever.  So, finally, I collected the bits - I chose a green homespun to match a lace trim on the arm, and a periwinkle cotton for stitching to match the piping on the gown: 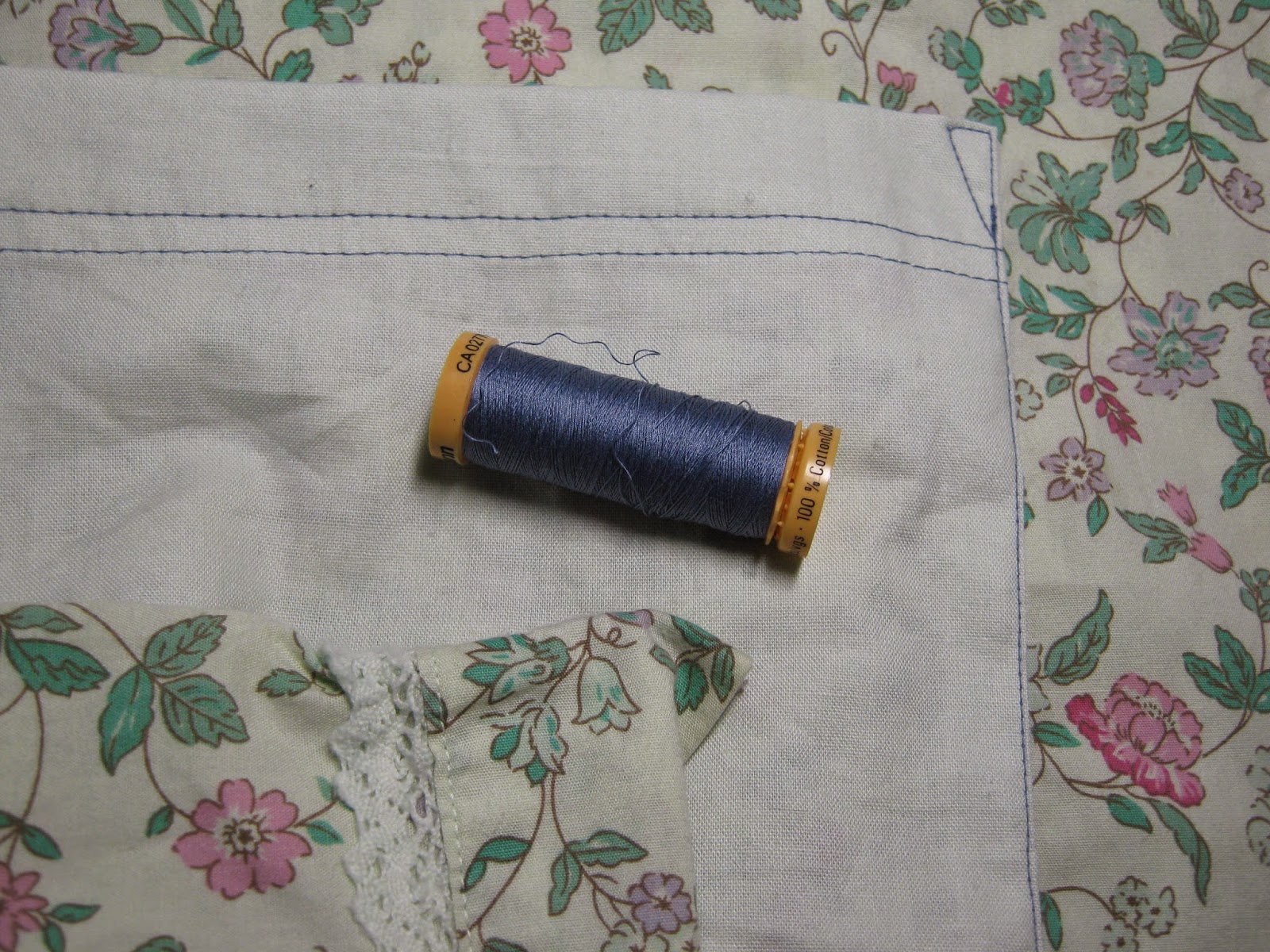 So, finally, after some years of grumbling about the lack of pockets, I did something about it:

And now I have a gown I will more happily wear: 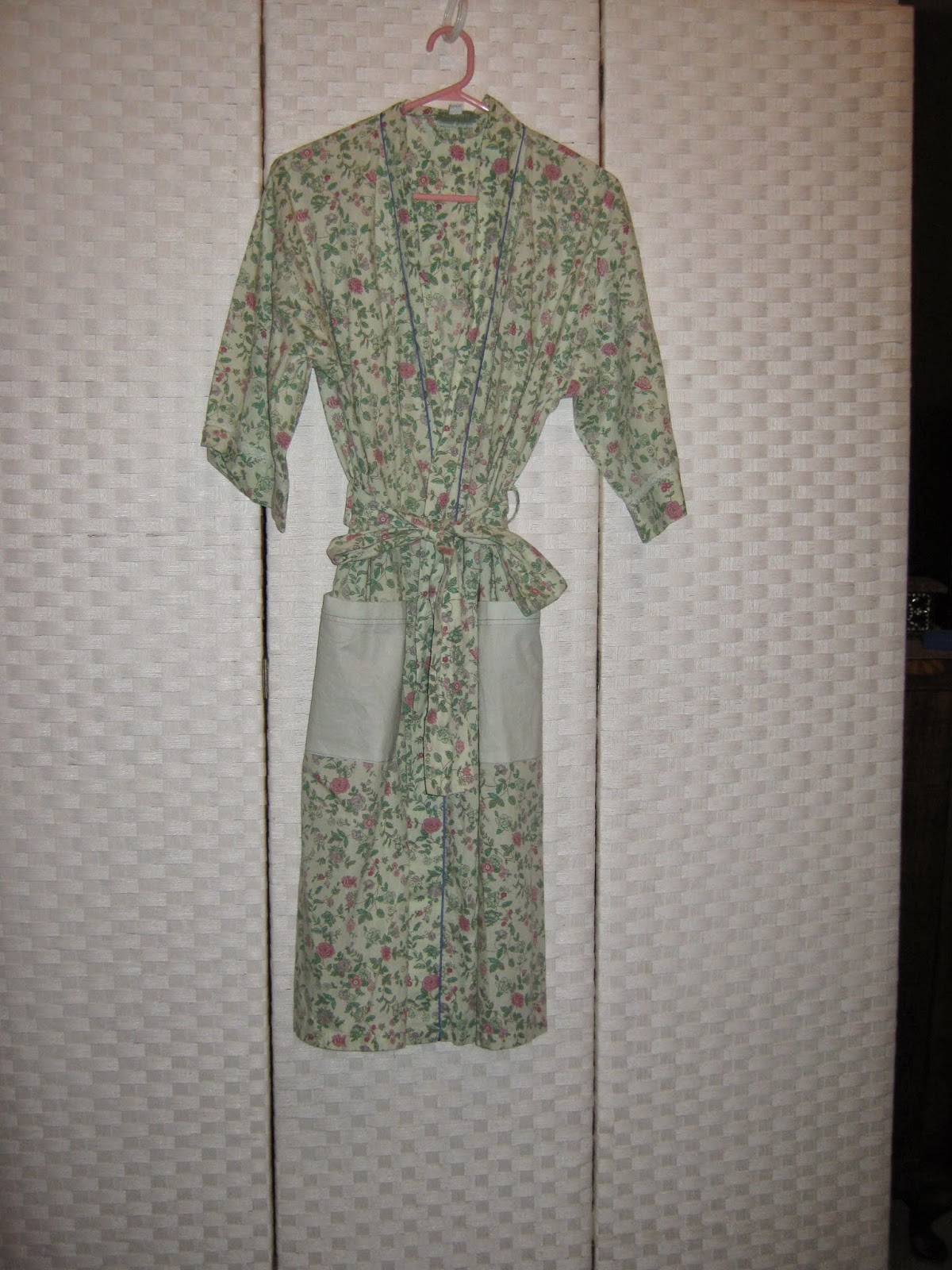 Have a great week everyone: