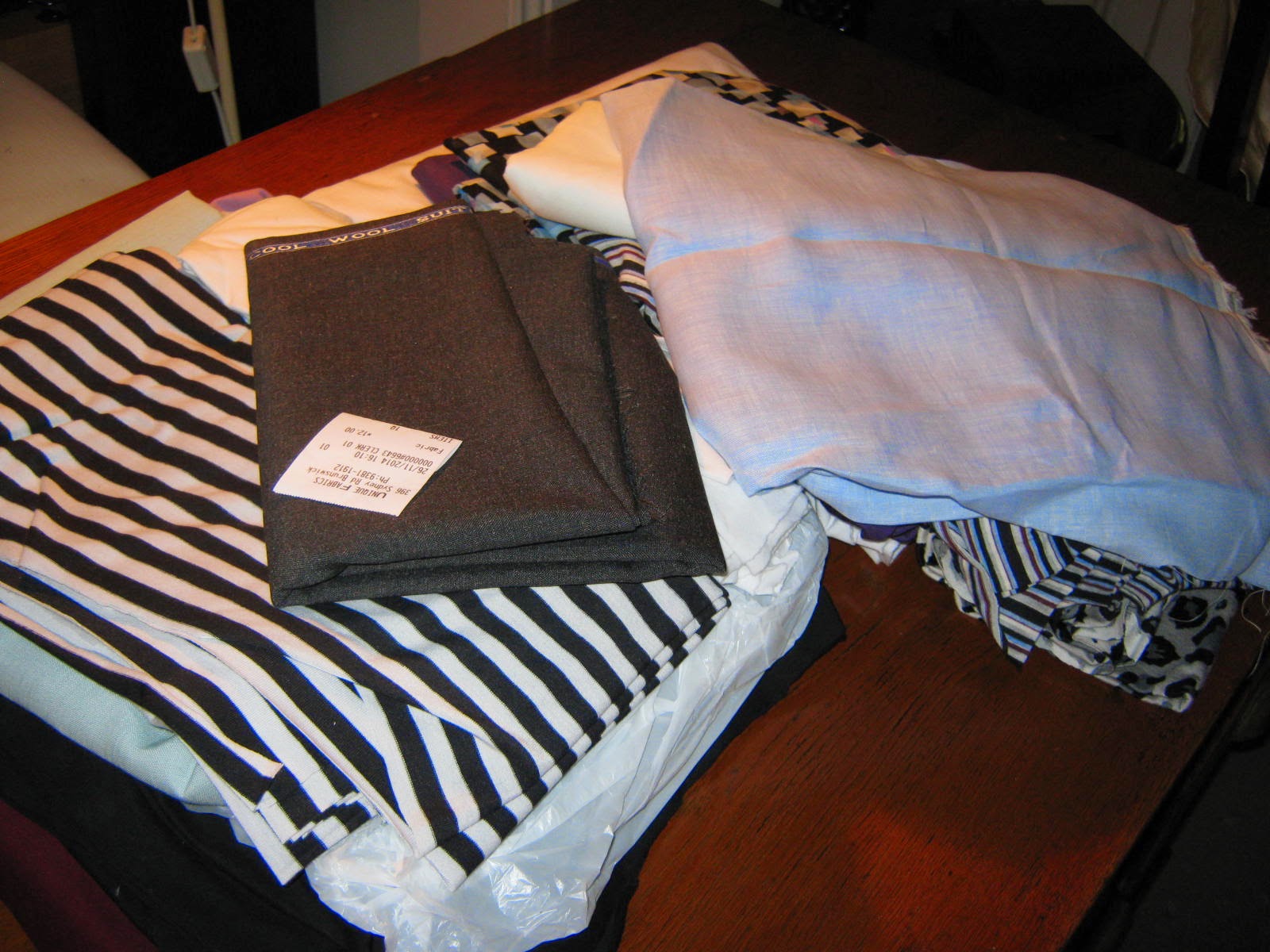 I go to Adelaide once a year for business and personal reasons.  DH sometimes comes, but sometimes doesn't, depending on his responsibilities, obligations and demands.  This year he could.  I suggested we call into Melbourne for a day or so, on the way, so I could buy some stash and look at the Gaultier exhibition.

This trip was spontaneously planned, so apologies to anyone in Melbourne - I did not have time to let anyone know, and not much time there in any case to meet you.  Next time - Melbourne is only a short flight away from Newcastle :).  It takes longer to get into Melbourne from the Tullamarine Airport than it does to fly there :).

I purchased viscose  knits in colours that suited me : 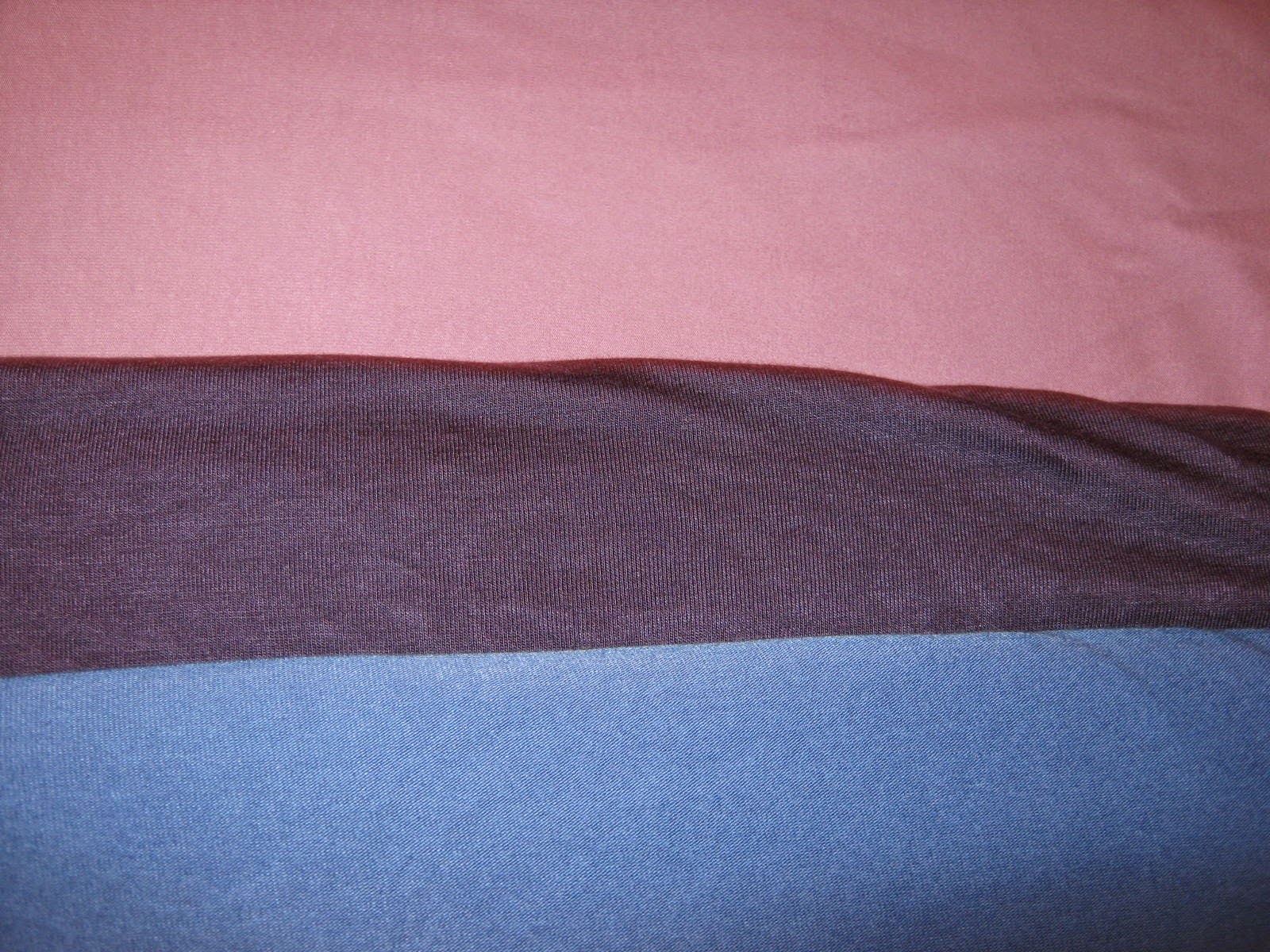 Thick plain cotton  knits (some with lycra)  for winter: 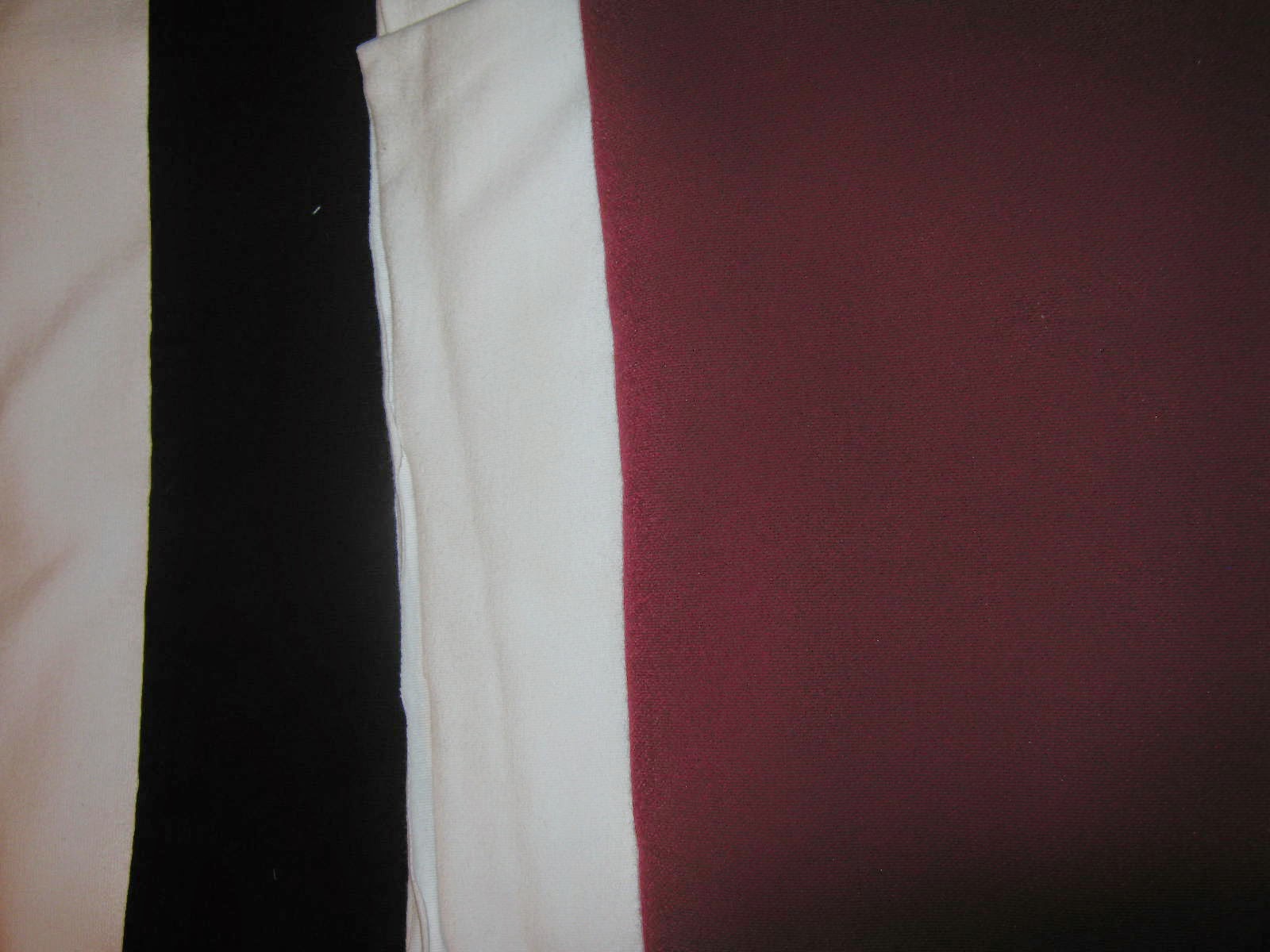 And some three patterned  knits, also in cotton (some with lycra): 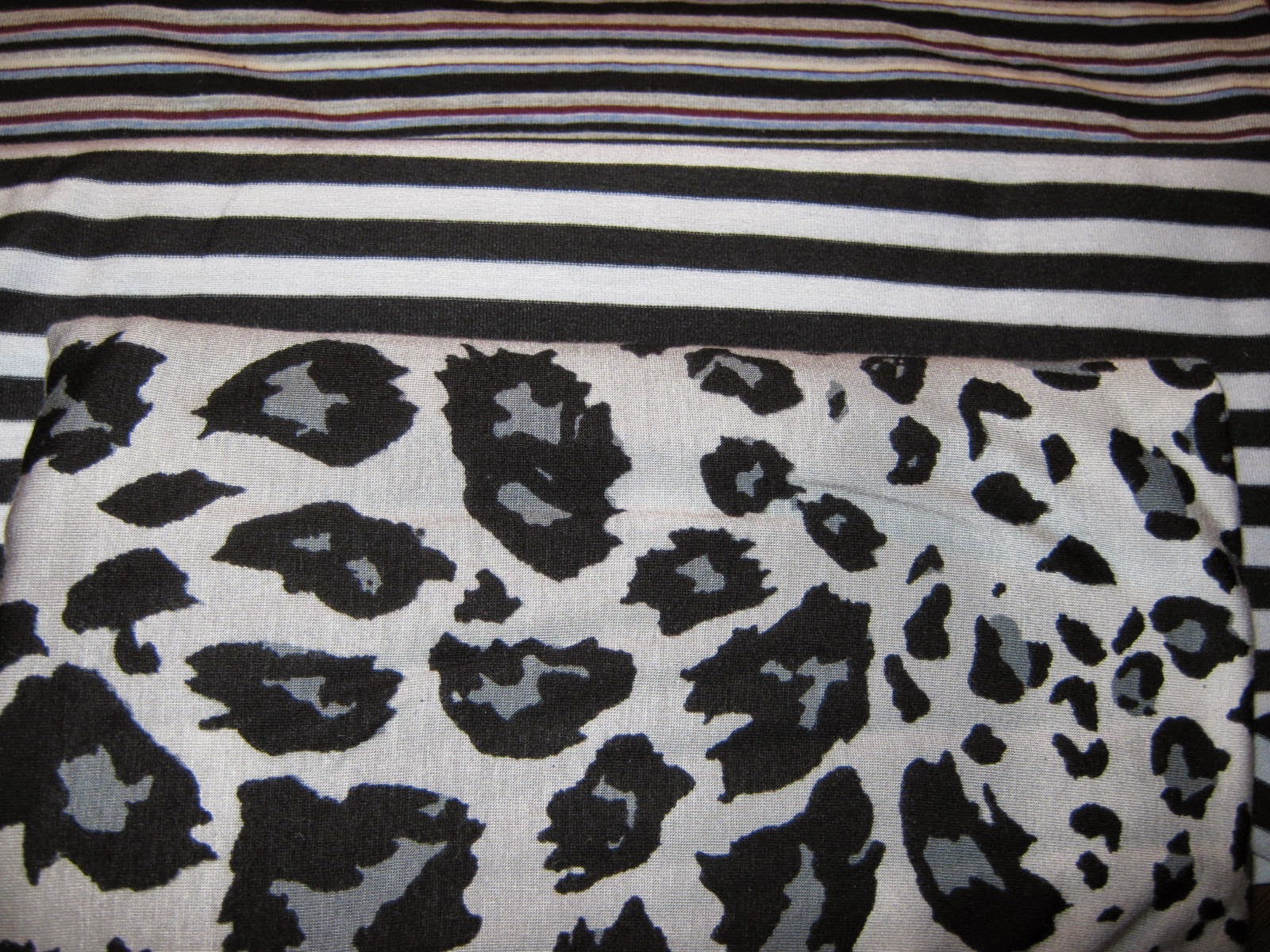 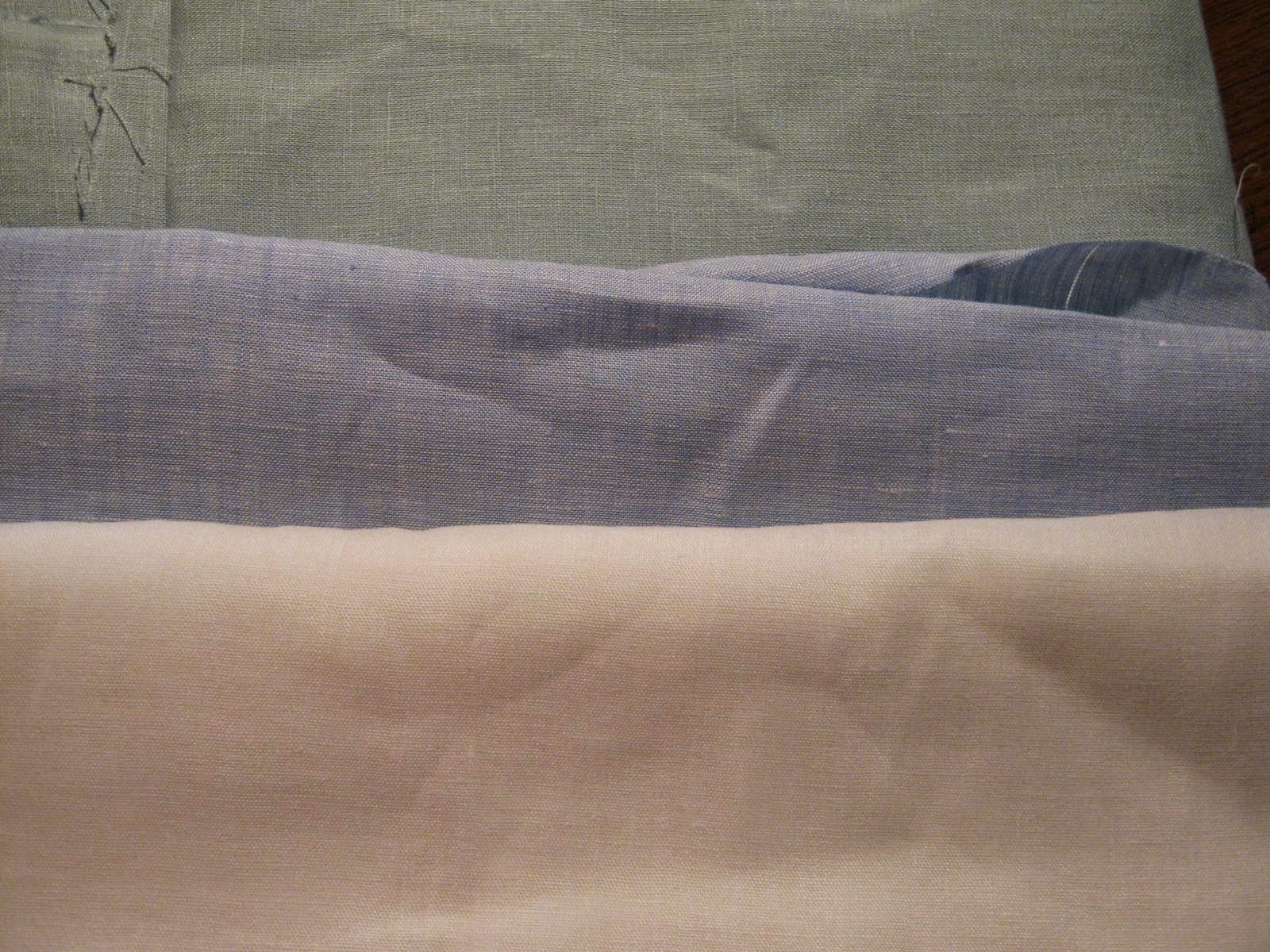 And a length of lightweight dress/blouse fabric in colours that suit me: 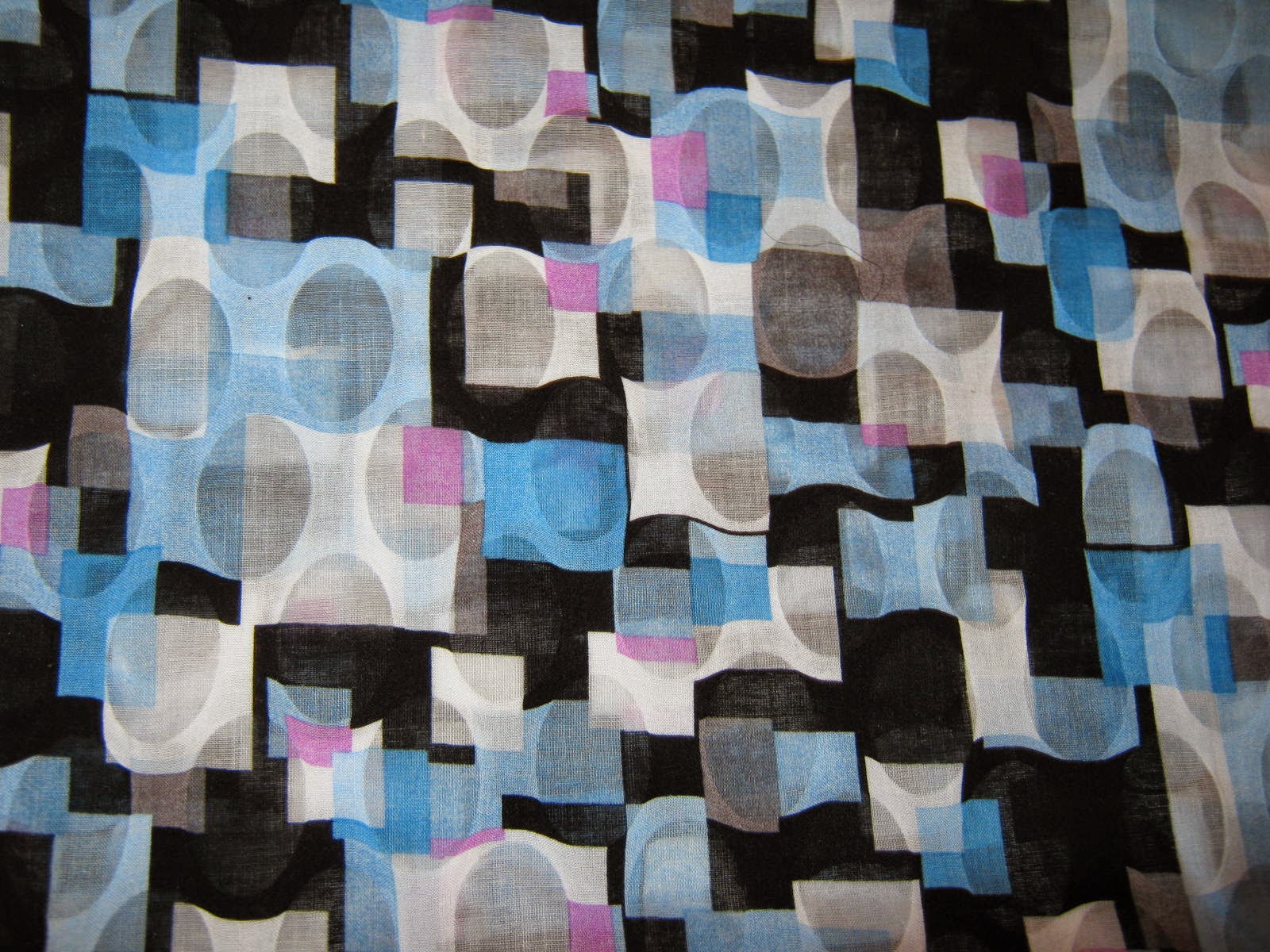 Plus a small amount of wool, I bought 1.2 thinking it would be good for the popular Rachel Comey skirt (V1247). 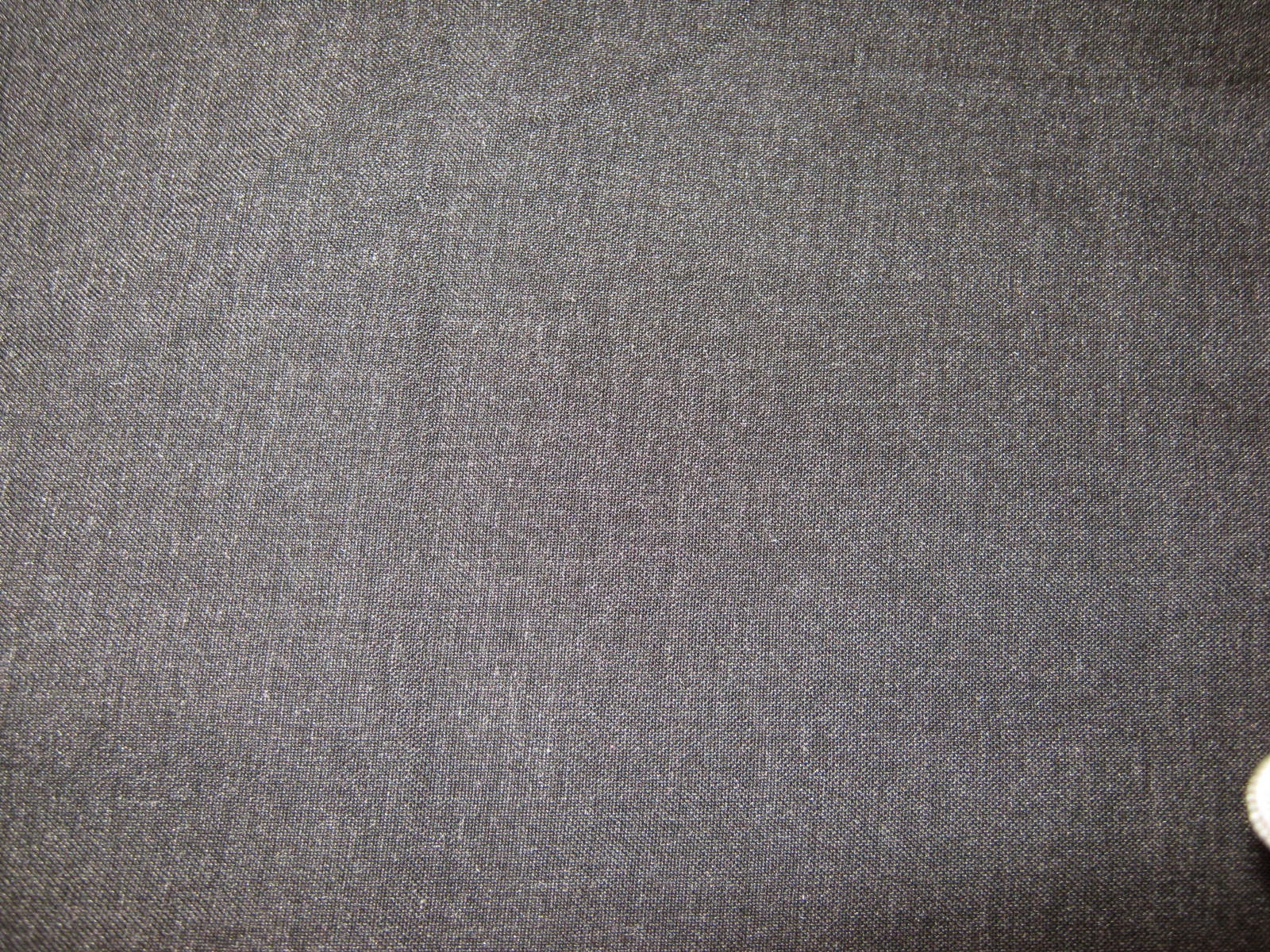 *****
We also visited the Jean Paul Gaultier exhibition that is currently showing at the National Gallery of Victoria.
This was an immersive exhibition with the dummies appearing to come to life and talk.  DH worked out how - there is a projector projecting the images onto the mannequins, presumably with sound track.

Phone photos seemed to be allowed.  Gaultier "Himself" welcomed you to the show - you can't see it here on a moment in time photo, but the eyes and mouths of these mannequins appeared to open and close.  Quite a few of the exhibits were staged this way. 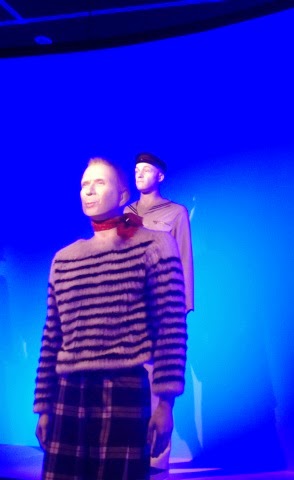 Gaultier loved his grandmere very much, and was quite intrigued by her clothes and underwear, and that started a long fascination with corsetry.   This is one of them - finished with bits of raffia and wheat: 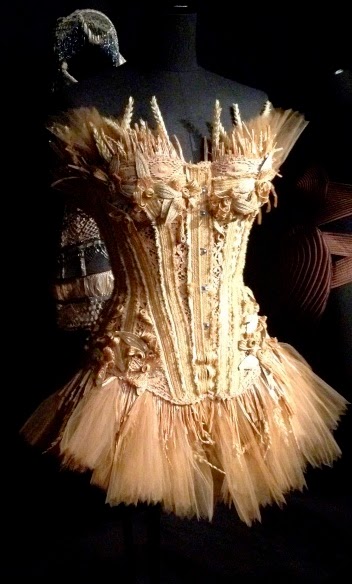 Gaultier has plundered so many ideas and made them his - in this picture you can see the "Can Can dress" - the ruffled petticoat is on the outside, with the inside showing multiple images of kicking legs.  Behind this you can see one of his men's suits - just look at the cut and hang - perfect.  His workshop certainly knows what it is doing.

Well, after this immersive experience, it was time to fly off to quiet, quaint Adelaide...
*****
The piece de resistance awaited  in little old Adelaide, the small  city in the provinces, frequently scorned but much loved by all of us who have lived there.  It's such a nice place to live in - small, easy to get around, friendly.
The Art Gallery of South Australia is currently collaborating with the Musee les Arts decoratifs and is hosting an exhibition called "Fashion Icons".  Ninety outfits are currently on exhibition - according to a friendly gallery guide, two had their own passports, but he had no idea how or why!  Adelaide's exhibition was a lot more conventional than the interactive Gaultier exhibition, but then this was a story of high couture and it's evolution into forms we currently know - how couture has merged and morphed with RTW.  Gaultier of course was a lot more streetwise and entered the scene during this trajectory, and plunders from the street and the mass,  from old techniques and historical clothing including corsets, and utilising new materials.  The Fashion Icons exhibition traces the main ideas that would also have influenced Gaultier, through the 50's to today.

For those of you interested in the details of this exhibition, here is a pdf  catalogue I found on the internet:
http://www.lastminute.com.au/dms/site/adelaide-barossa/fashion-icons.pdf?cid=social:t:lmau:retail:to:SM8019  .

There is also a dedicated site hosted by the AGSA about the exhibition that can be found here: http://fashionicons.com.au/
Unfortunately, I could not take any photos as this was not allowed.  There are some on the internet, so just to give you a flavour:

And a Christian Lacroix dress I have always wanted to see: 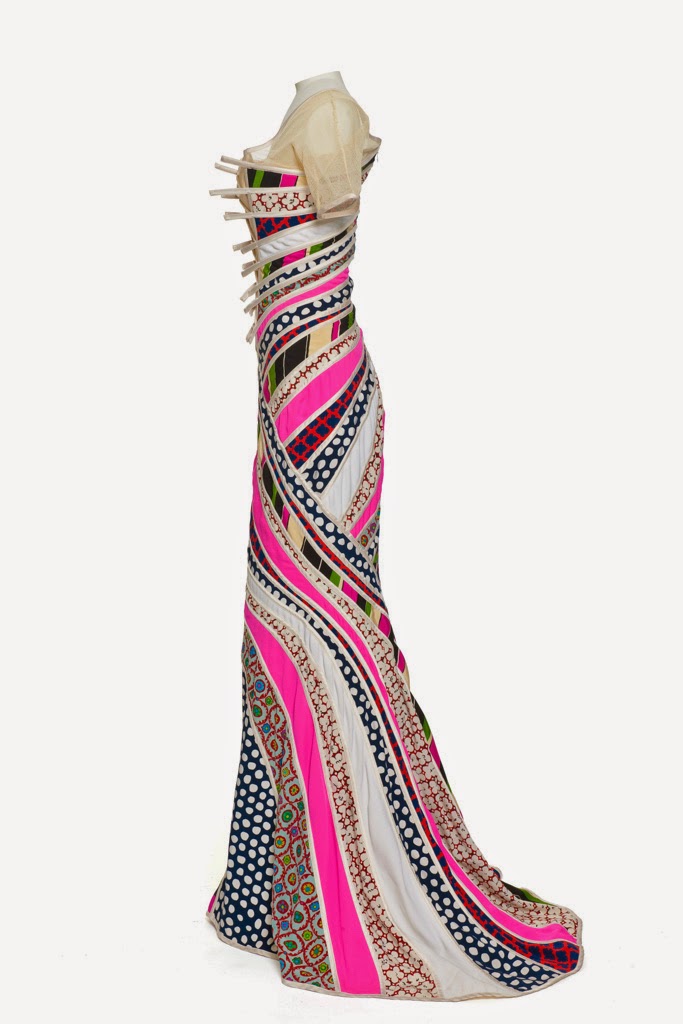 And now I have!

Before I go, I just want to share with you this thought.  Most of us who sew at home tend to be overly critical of ourselves, and even think of ourselves as lesser beings in the fashion hierarchy.  Not so - the fashion world in Paris lists the four levels as Haute Couture, Couture, Paper patterns and Dressmaking (US!!!!) and Pret a Porter (Ready to wear).

Do have a lovely weekend everyone, wherever you are.