Is it a New Duster Coat?

No, it's a Christmas gift for DH - a Nightshirt made my me :).  I noticed that DH's nightshirts were looking a little old and tired.  I was also trying to find a present for him.  Now, he is at the age and stage (as am I) where he does not need anything more - we really need to start getting rid of stuff. So I thought that making him a new nightshirt would solve two problems - no more unneeded junk coming into the house, and a useful present to boot.

Luckily DH is doing the medical cover this weekend - he doesnt think he is so lucky, but I am, because I could get busy sewing all weekend to finish the Nightshirt Job:).

The fabric used was one of the Spots and Stripes range of cotton poplin that Spotlight sells. I used Simplicity pattern 2317:

I found one of DH's old nightshirts and measured that and decided to use XL as my size.  It's always better to have larger rather than smaller, tighter nightshirts - more comfortable.  I added an inch in length..  The pattern was different from the old nightshirt in that it had a lapel.

The pocket on the pattern was smaller than that on the old nightshirt, so I made the seams smaller and that rectified that problem :).

Otherwise, I made the pattern up as instructed, except I omitted interfacing the collars, cuffs and facings.  This is because the old RTW nightshirt did not have any.   I did not think the added layer was needed - in a nightshirt, softness is needed.  The only problem DH has had with the RTW nightshirt is buttons pulling through the un-interfaced fabric, or a buttonhole tearing through.  I patch these with some ingenuity.

So, for this nightshirt I did place interfacing into the button and buttonhole areas.  That should solve the problem of tearing and pulling through.

I wasn't sure where to start the buttons or if the pocket placement would be okay: 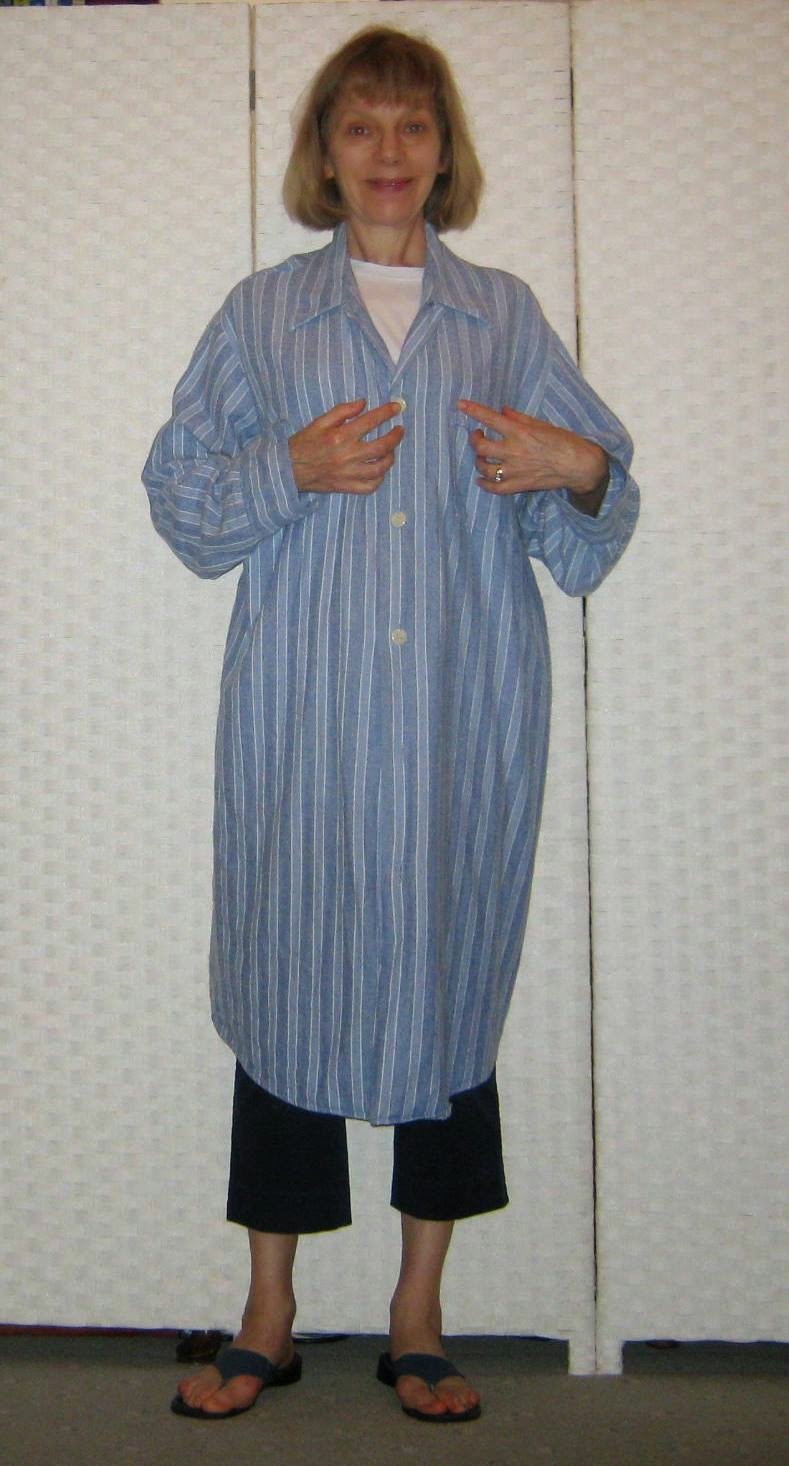 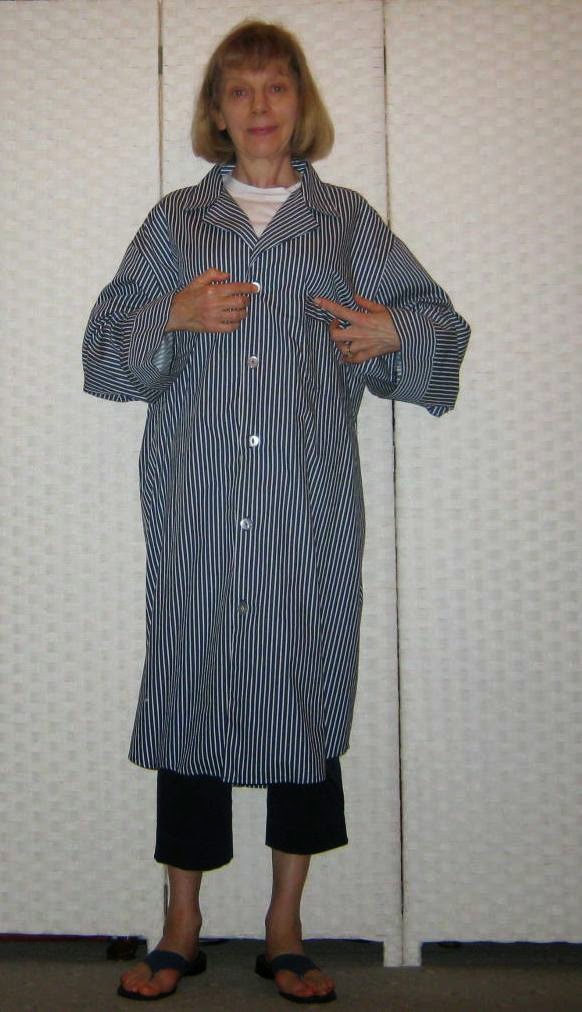 The sleeves on the old nightshirt are narrower at the cuff than the new nightshirt; however, some of DH's nightshirts have this width of sleeve.

The only part that was tricky was the collar.  I was blithely sewing along when I realised I had not made a collar that did not have a back facing before. I was not entirely happy with the method that the pattern used, but made the most of it - lots of poking and prodding of bits that did not want to go in, and a hefty sewing down solved the situation: 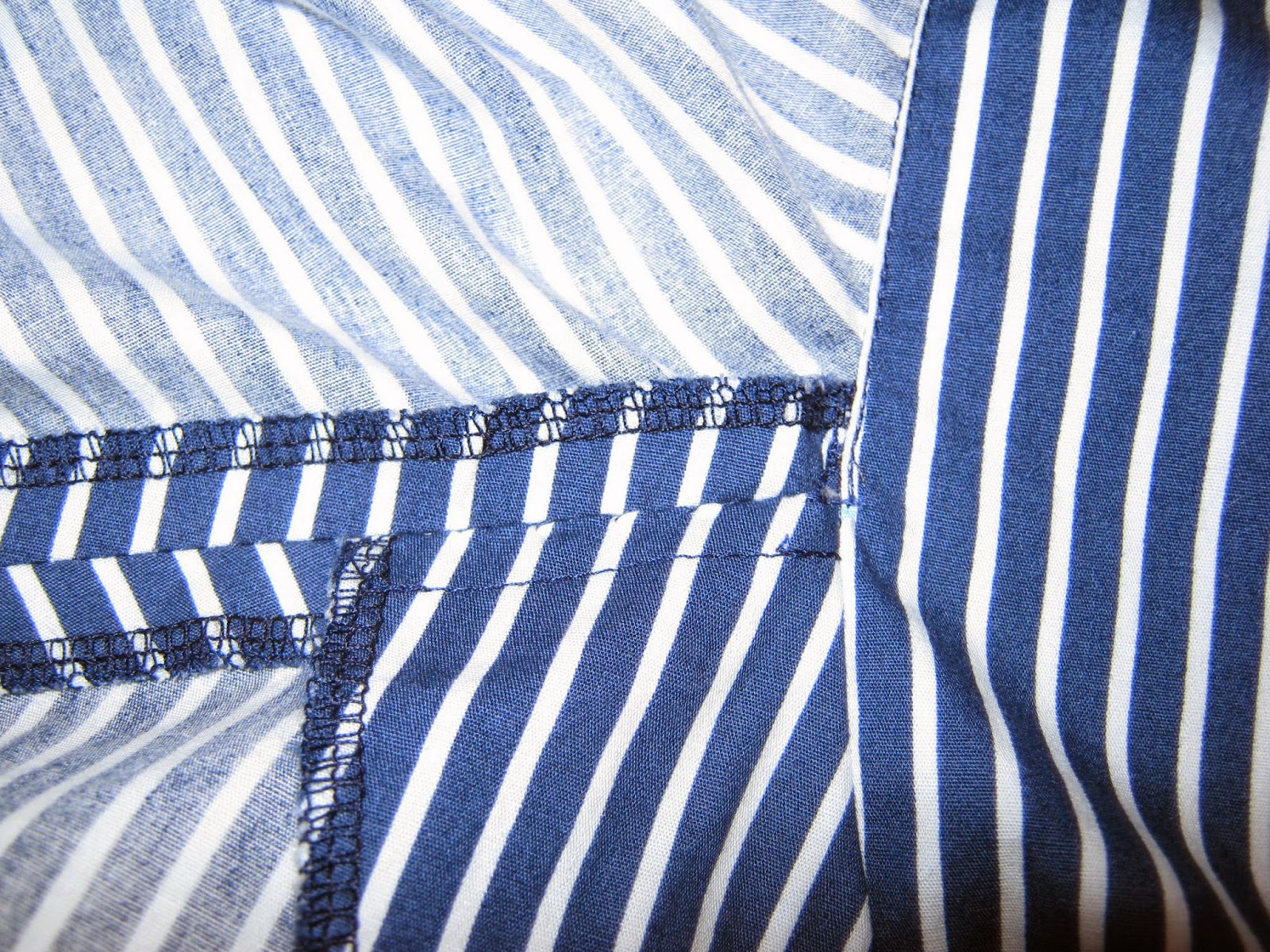 Next time (although while making this I swore there would not be a next time) I will put the shoulder seam to the back and then do the collar, or even finish the facing below the shoulder seam like the RTW one: 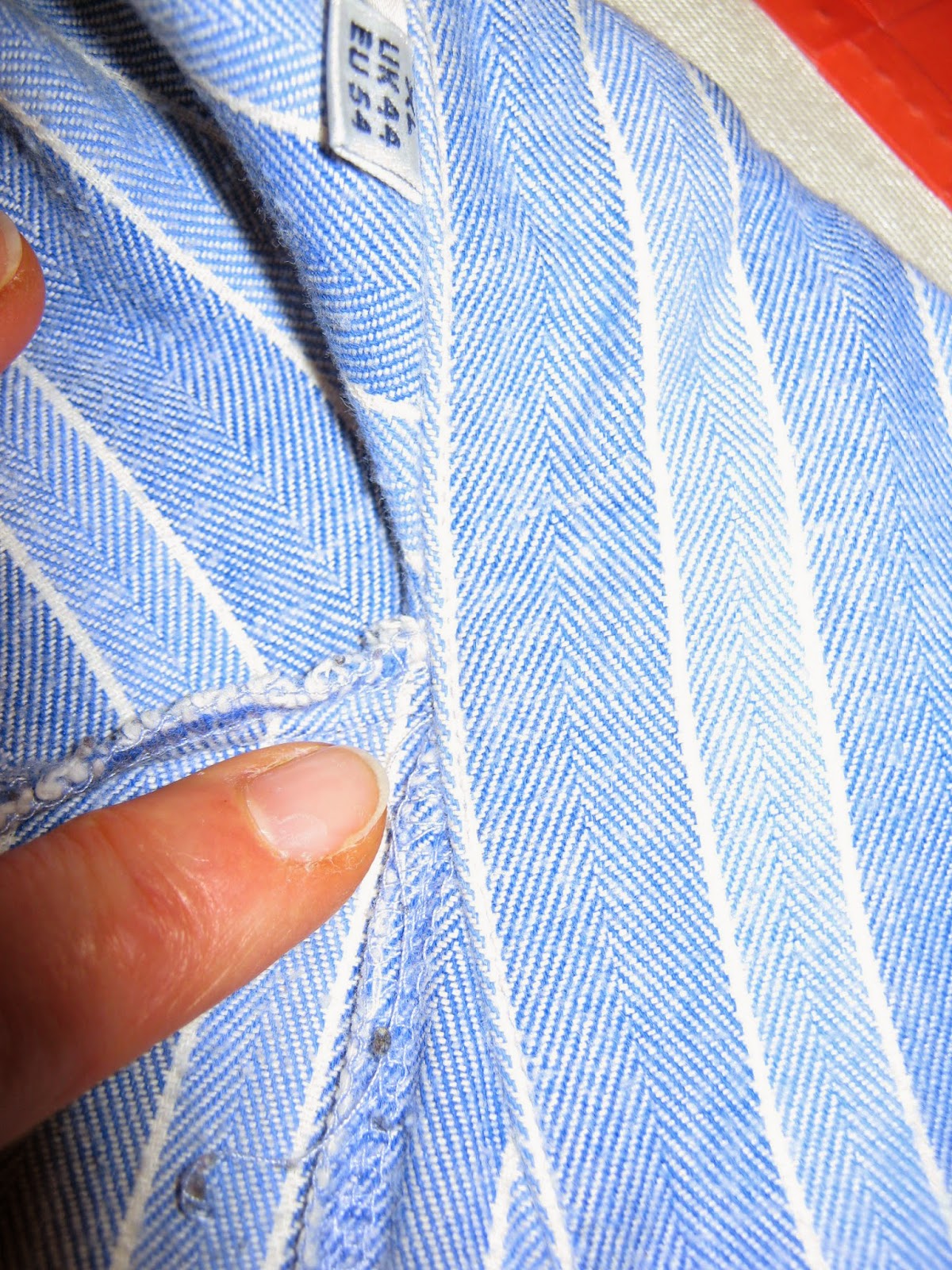 I also seamed the front/front facing seam in a 3/8 inch seam so I did not have to trim it back.  The extra width on the lapel does not seem to obvious, and it was a lot less work.

Now, for the views: 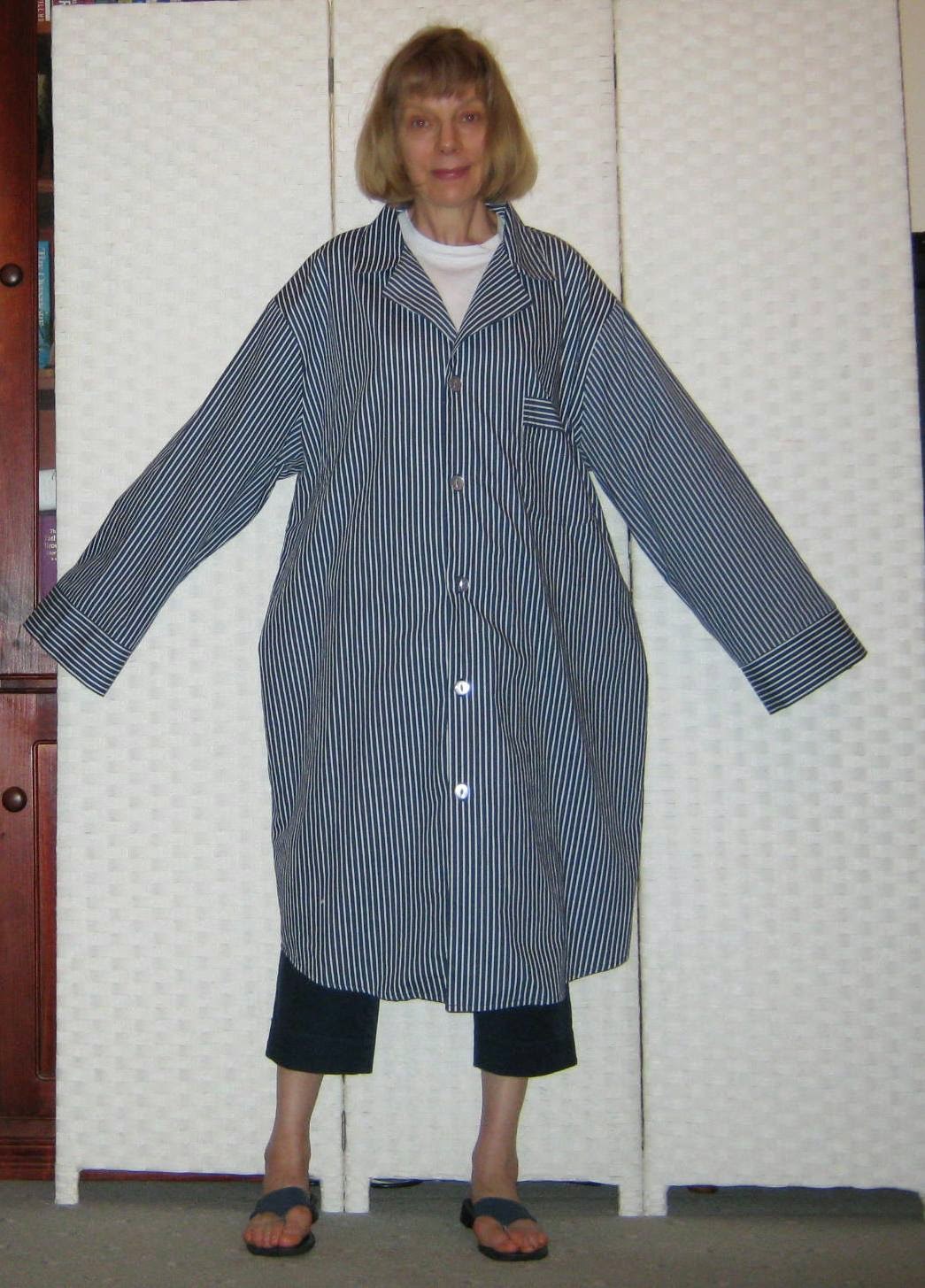 Okay, not a flattering fit on me!! 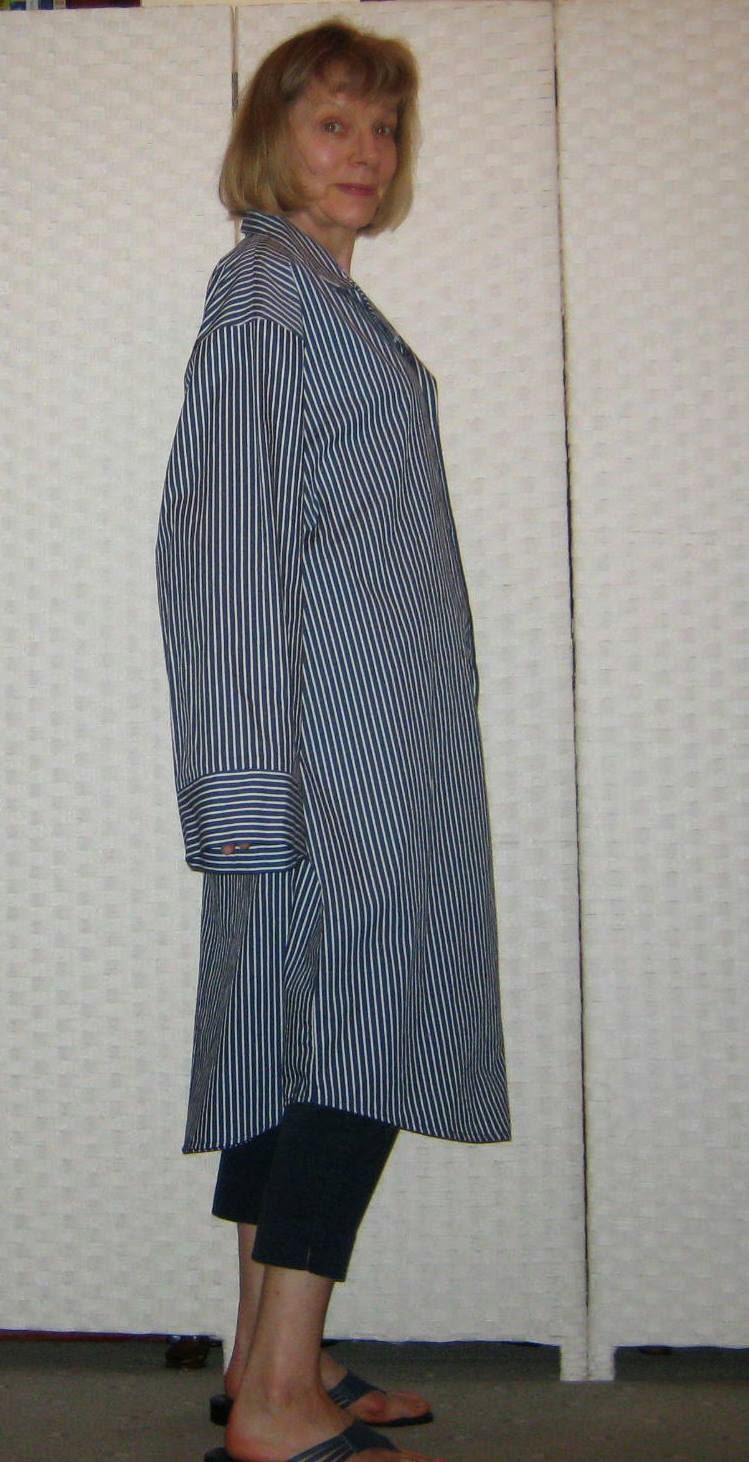 Sleeves a bit long on me :) 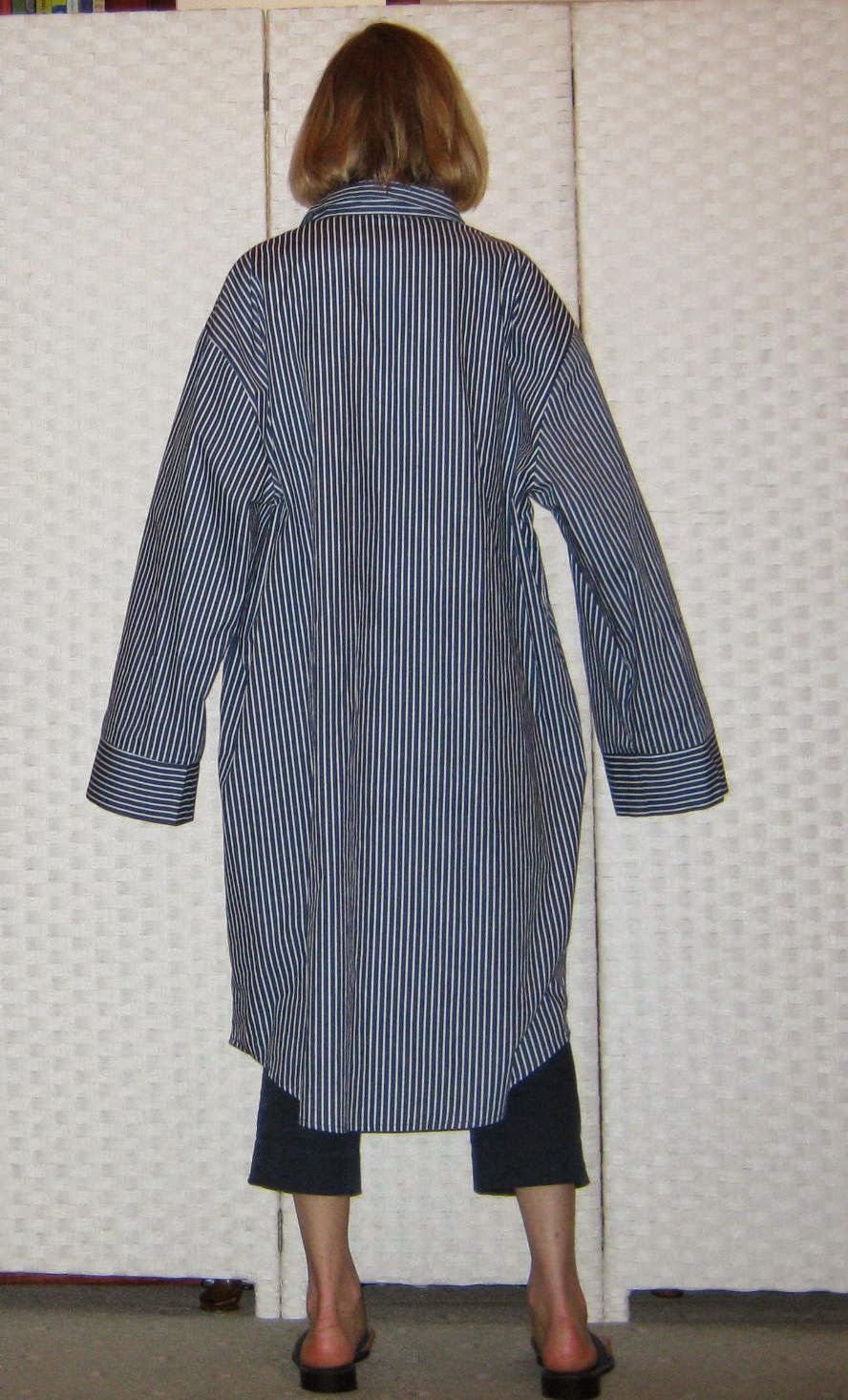 A bit large for me, but I think this will be just right for DH .

The lapel and collar: 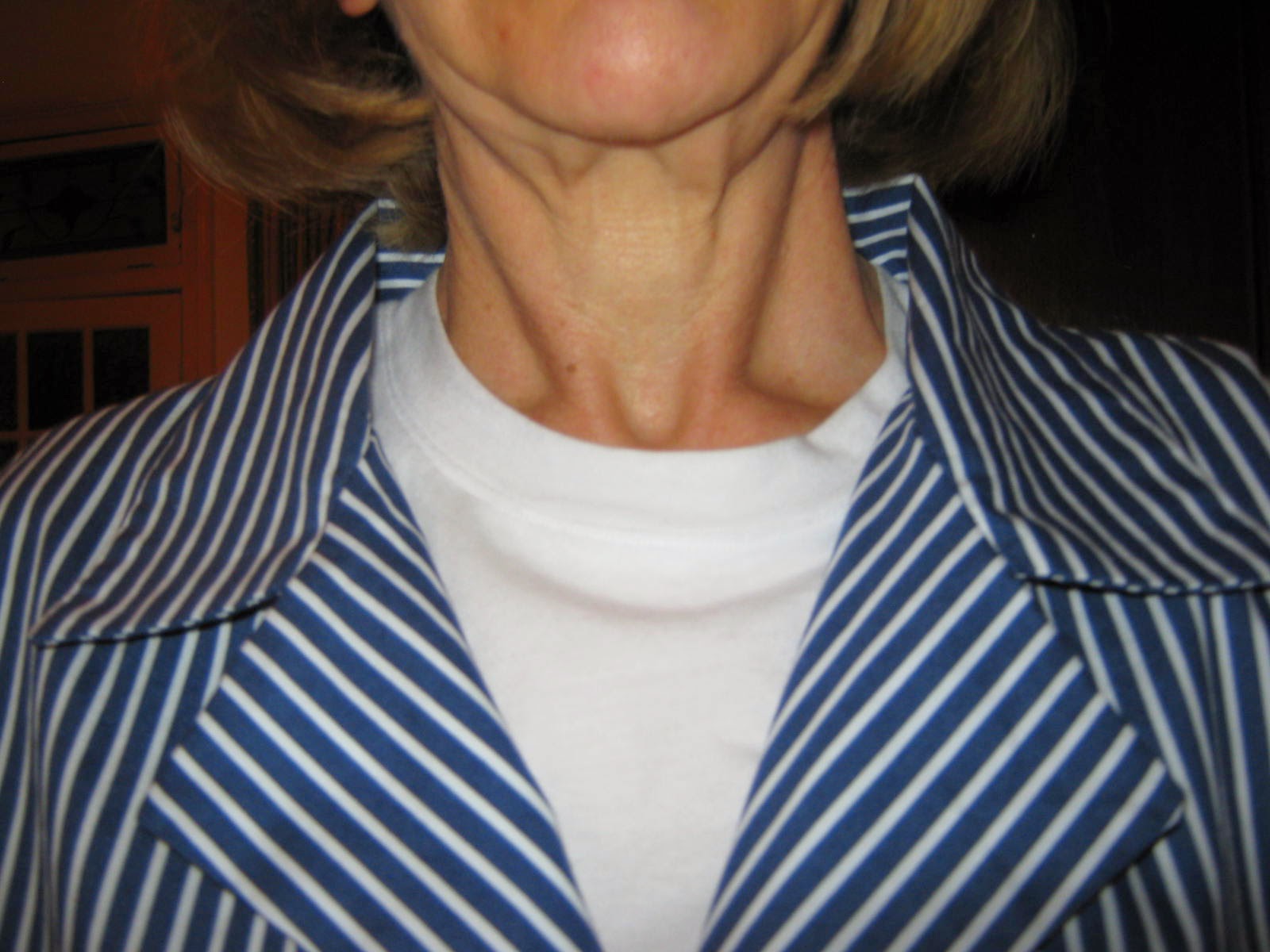 Which look fine without interfacing - and poplin is a very tight, close, firm fabric as well. 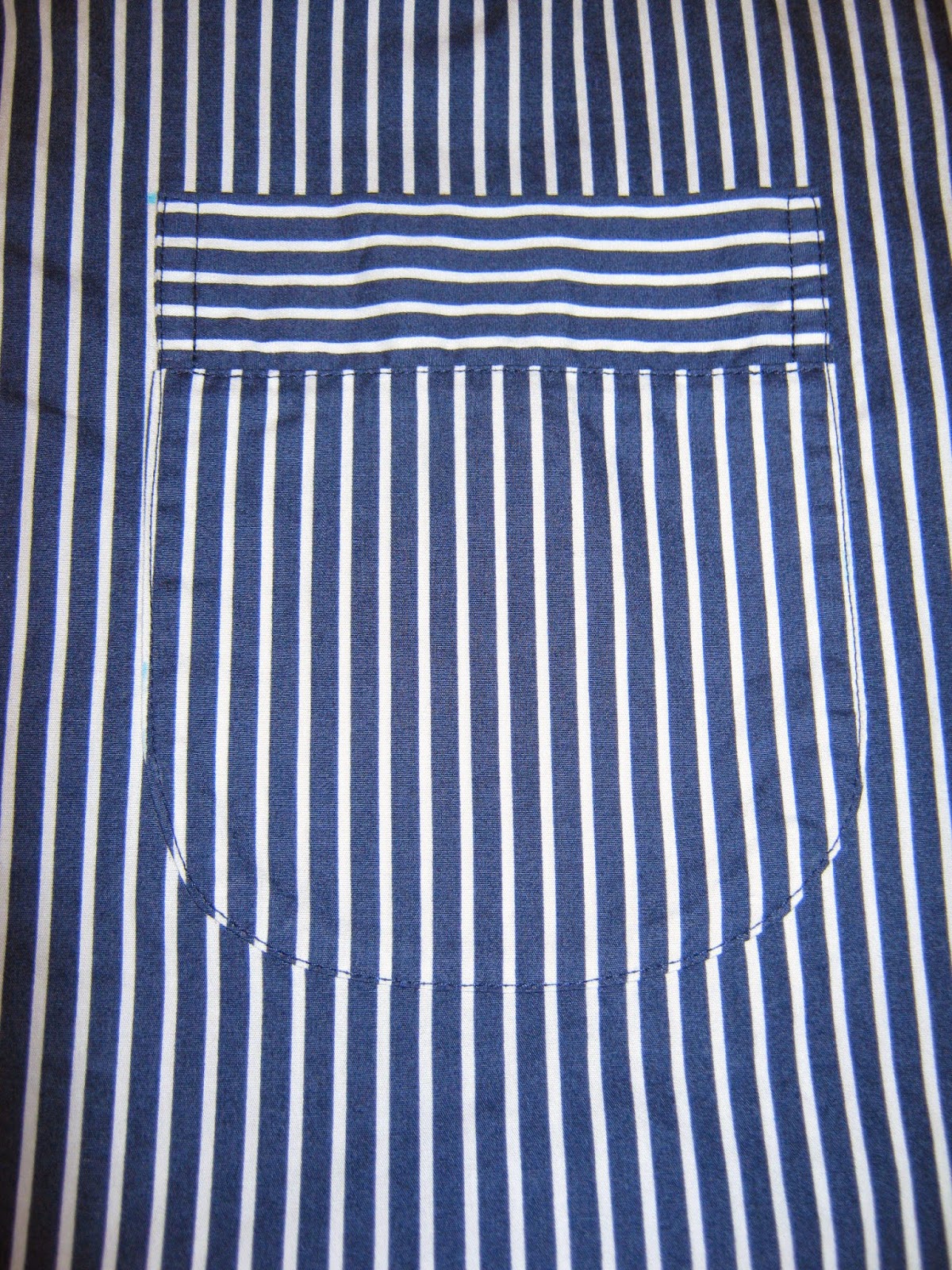 And yes, the stripes do match up! 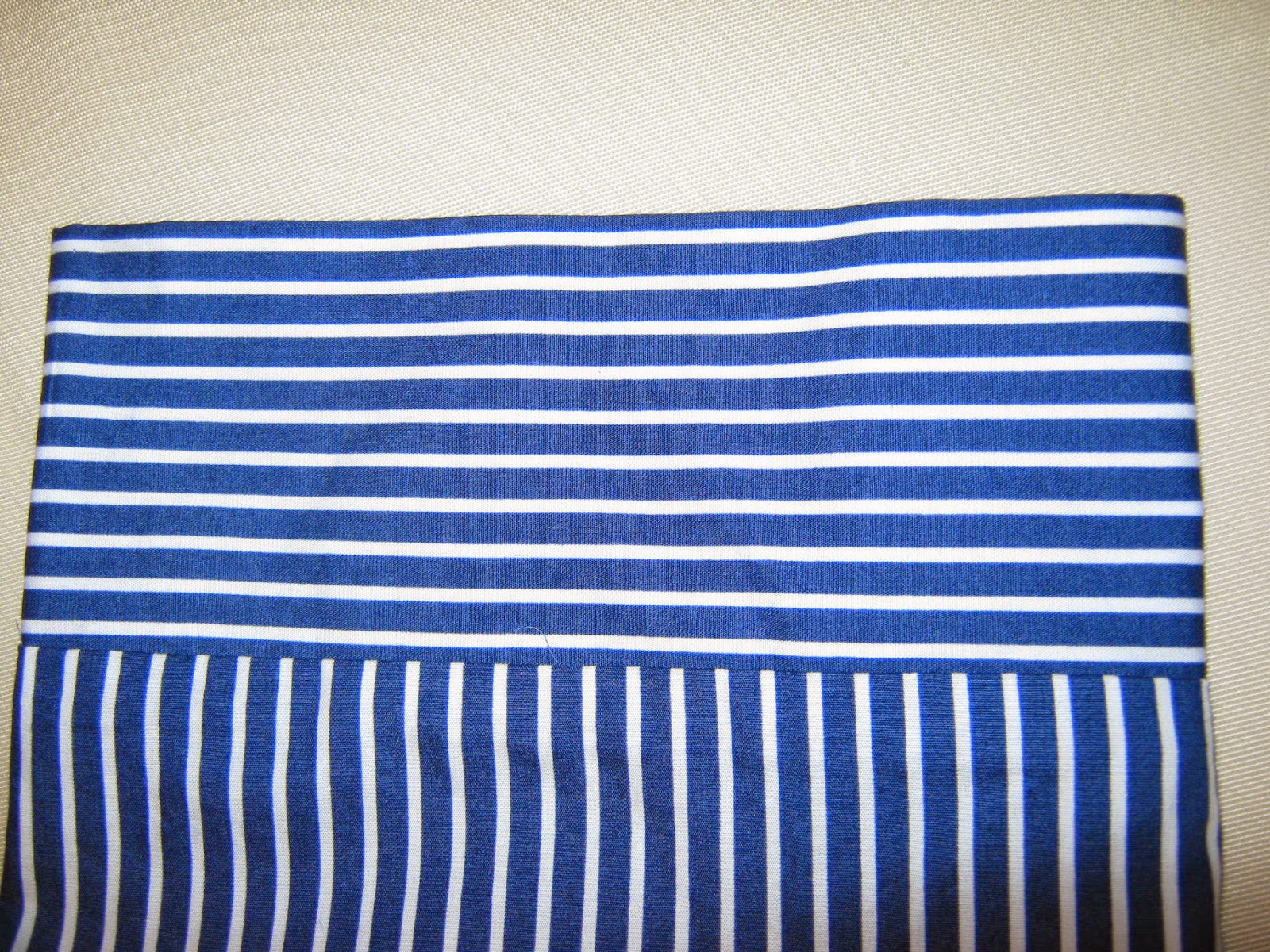 And a cuff - and the stripes are even at the seam and at the turn.  Not sure how I managed that for all cuffs, but I did.

Before I did the buttonholes and sewed on the buttons I applied interfacing to those areas:

(I also used bigger buttons than the pattern and respaced the buttonholes to match the RTW nightshirt). 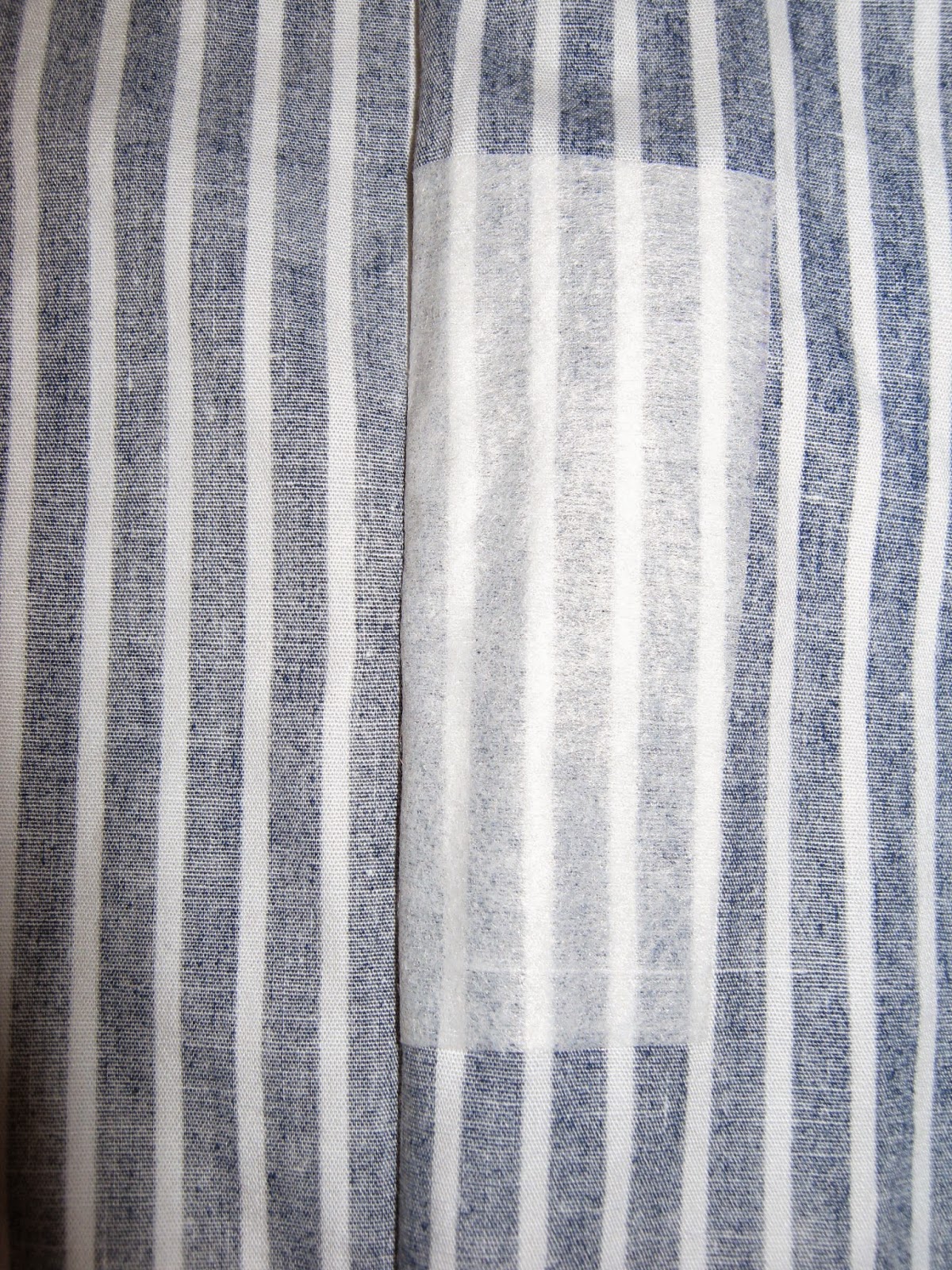 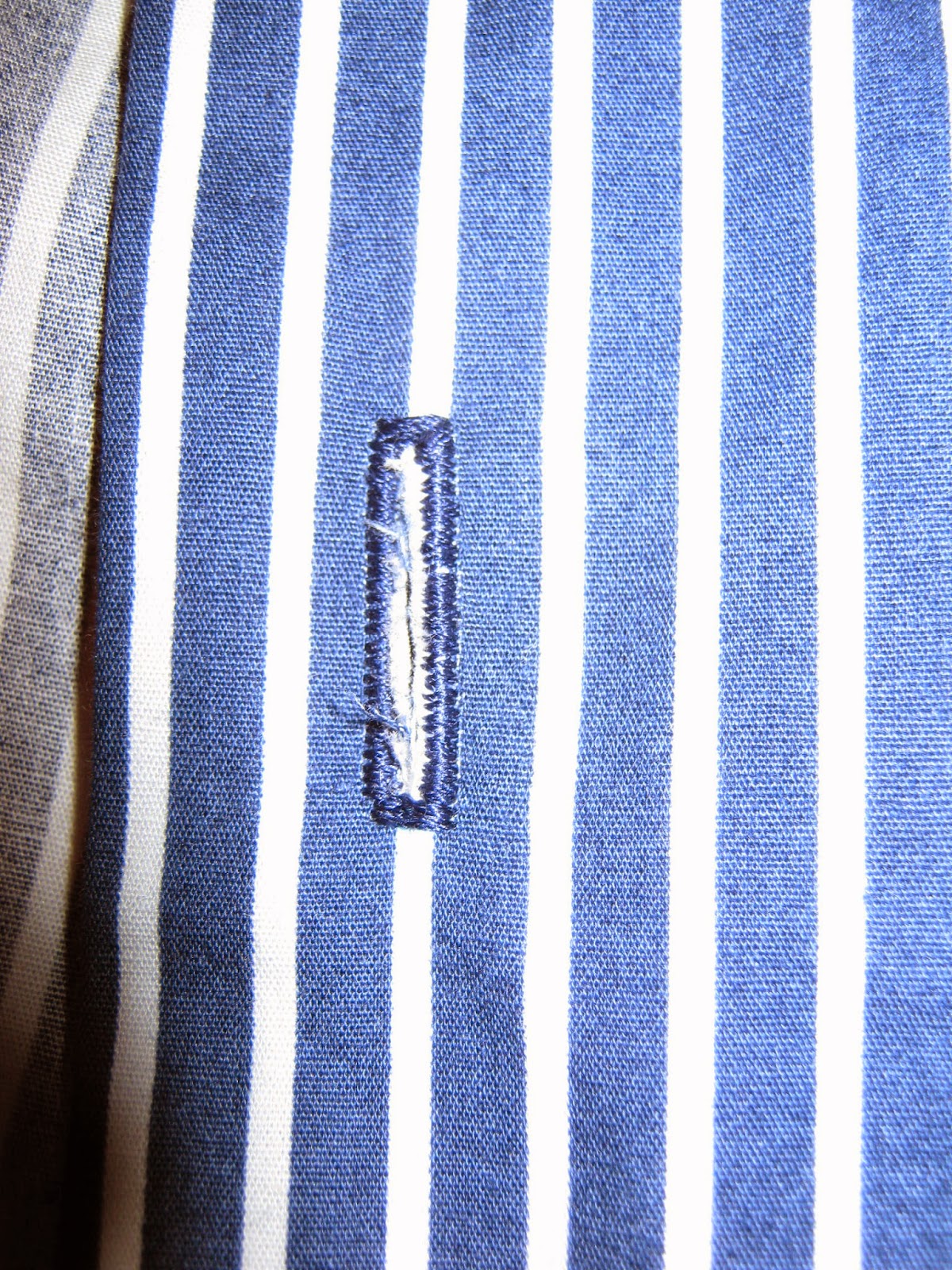 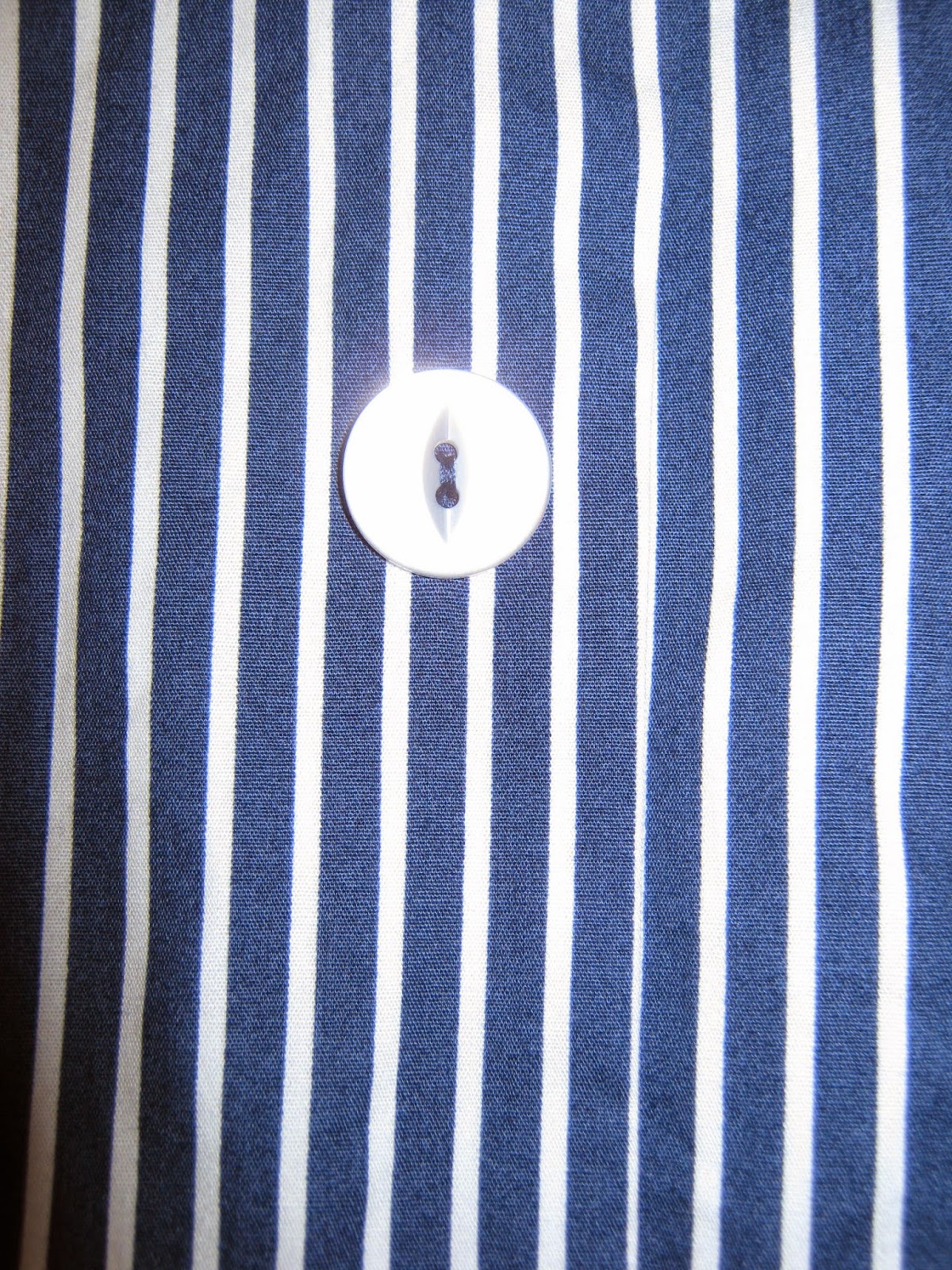 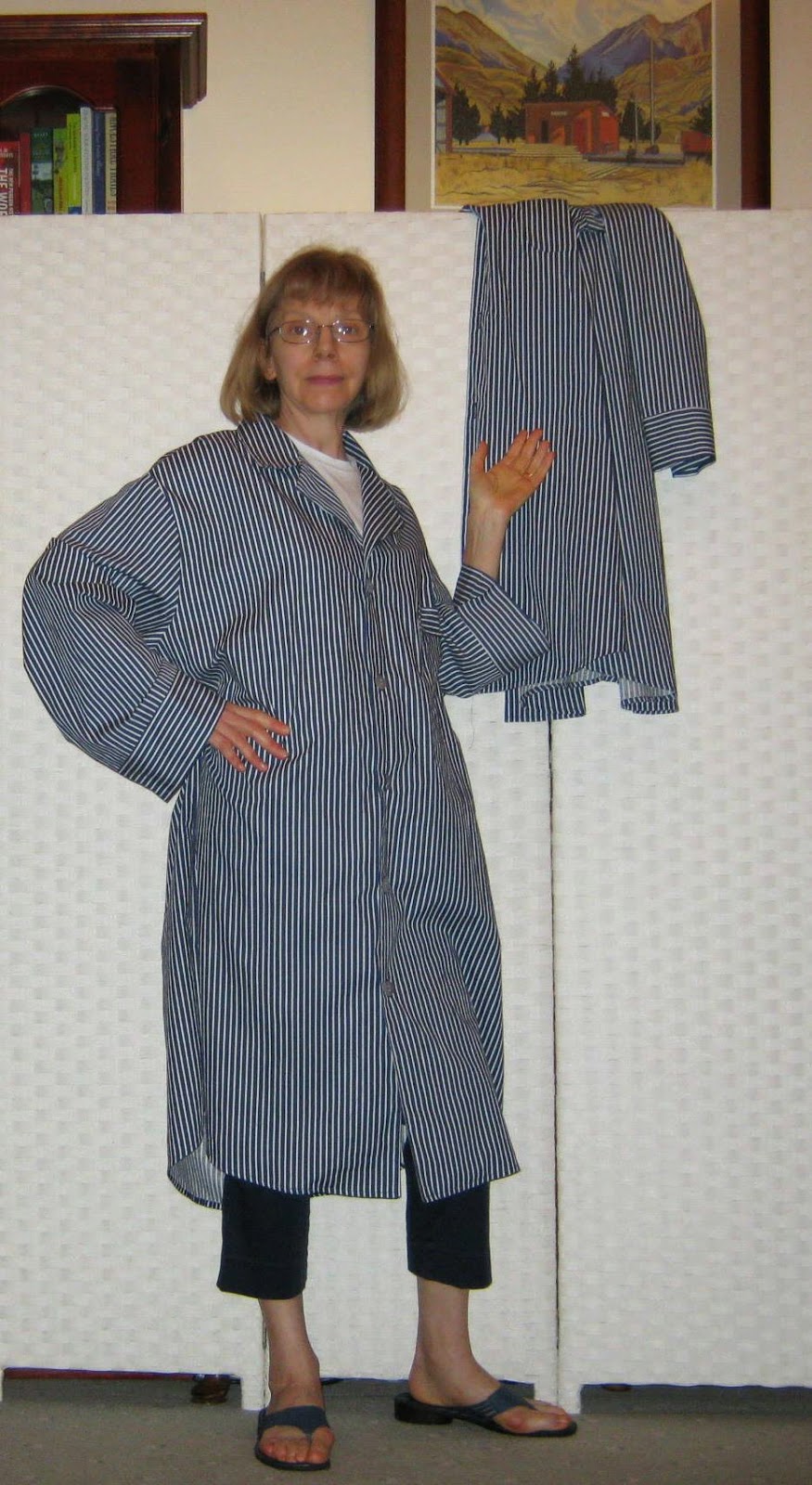 I made TWO!!  That was quite a sewing effort for this weekend.

(I forgot to crop the top of this picture - now you can see why I use a screen - bookcases are not the best backdrop for photos - and the picture is downright distracting as well - its a place we went to in New Zealand - DH is very sentimental and likes holiday souvenirs.  He's the romantic in our household, and I am the more practical romantic, if you know what I mean...).

I think DH should like these nightshirts - if not, I suppose I could always revert to using them as big duster coats:)

I hope you all have a happy, healthy week, wherever you are.