Summer Sewing is About to Start... 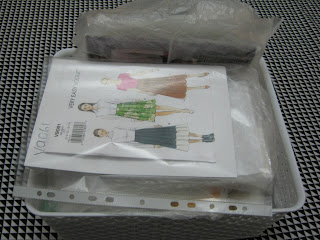 There is something about a new sewing season that is always exciting - so many things to make, so many ideas, so many choices.  Sometimes I get overwhelmed by the sheer number of possibilities.

As  you know, I often sew  useful wardrobe workhorses- very serviceable basics.  Because that suits my current lifestyle, even though I sometimes wish it were otherwise, and also because I live in a very casual sort of town - which sort of intersects with my current lifestyle and why it is not quite what I would wish here.  One day though, I will move back to Adelaide.

I also want to sew some more interesting garments,  a few things to pep up the basics.

And then I think about sewing it all - and think about tracing all the patterns, which I always do - it means you have the master pattern if things go wrong, or you traced the wrong size and need the next one up - if you did this straight from the pattern, you would not be able to recut.  So I trace my patterns.  This is also a good time to think about how you would sew the garment.  A bit of thought at the beginning can save a few unpickings further down the sewing track

Now that is the step I hate. That and pre-washing fabric.  The bit I like is the sewing and watching the garment evolve.  But tracing patterns also helps the sewing process because it is a good time to look closely at the pattern and think about  how you would sew the garment.  A bit of thought at the beginning can save a few unpickings further down the sewing track

And over the next few weeks I have quite a busy time with work and things that need doing around the house.  And will  have limited time for sewing but will want maximum results.

So as DH was working yesterday and this morning, I decided to get a bunch of patterns traced.  A marathon session, and here they all are, each pattern and it's tracing in a separate bag:

This will keep me busy for the next few months.  I also want to make some casual pants, and a couple of skirts and tops.  So I guess I will trace these this afternoon:

Then I can settle down and sew while doing the other  things in life that really are demanding my
attention.

Do you make plans as well, or do you just sew whatever you want to make as the idea arises? And how do you fit in sewing with other life demands?