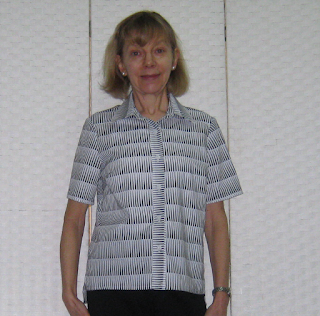 It's been quite a fortnight since I last blogged - and it is also unlike me to miss doing a weekly post. In a nutshell, I had one of the worst colds that I ever had.  I was so woozy I managed to lock myself out of my car, with the engine still running and the keys to the car and house in the ignition.  My handbag with mobile phone was safely locked inside the car.  I got out of that dilemma by quickly running up to my chemist, who was close to closing, and asked if I could use their phone to ring my husband.  He was doing his ward round, so it was quite embarrassing asking switch to find him for me!   He quickly came to the rescue though.  I have never done anything quite like that before, and still have no idea how I managed to do it!

Then I decided that I would try to make my garment.  It was going to be my July garment for the Make a Garment a Month group - our theme for this month is opposite.  So, as we are in the middle of winter, I decided to make a dress for the middle of summer.  I thought I would do something that is also a little opposite my normal style, because sometimes we get stuck in a bit of a style and sewing rut.  I put the skirt together and held it up, and quickly decided it was not me and that I would not wear it: 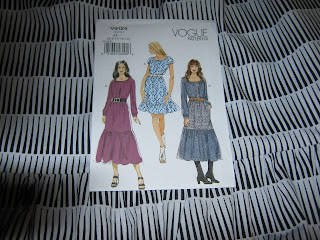 I should have learnt by now that frills, fullness and flouncing do not work for me. But sometimes I rebel against my boy shape and want to wear things like this dress. Only to learn my lesson again, that really, I look better in plain, simple, unfussy lines.  And I feel better - I was just going to feel daft in this frilly thing.  It looks good on other sewers that have reviewed the dress on Pattern Review, but not Sarah Liz


So I then set to work cutting the thing to bits and salvaging what I could of the fabric.  I thought long and hard and decided that I could nearly cut out, with some compromises, a New Look shirt (6266) that I wanted to make up as a wearable muslin.  I had just purchased a little more of the fabric to make a tie belt (an afterthought) and had not cut it out, so had enough for sleeves in that piece.  Not enough to match the pattern in the sleeve/bodice area but I decided not to let that worry me.

Let's look at the shirt again:

I altered the sleeves to a short sleeve length.  I only had limited fabric so I shortened both front and back and omitted the curved hemlines - I did not think they would look good with this busy fabric.  One major problem with cutting was that the pattern was printed off grain.  So I had a real fight getting the lines to look straight across my body.  I managed to get one side seam to match, but the other doesn't, but really, there was little I could do about that with the faulty printing.  I ran the button band - cut from the frill - downwards, which looks good, but also, if the stripes did not quite match, the fault would not be so obvious.  As you can see, though, the stripes do match down the front - quit an achievement given the squiffy printing.

I had to juggle lengths, with the back being a bit longer than the front.  That works though, and is also quite a thing at the moment.

I had already made a calico toile in January, but had fit issues.  The armholes were just not right, and in the end I worked out that I had to add a bit to the front curve of the armhole - and no more pulling - as can be seen in the picture above.

Sizing - I cut size 8 shoulders and neck, and 12 for the body of the garment.  The armhole was size 8 at the back and at the front, I drew a new curve from 8 at the top of the arm to 12 at the curve of the arm.  I found that the sleeve head fitted perfectly into the armhole.

The shirt has a front and back yoke, and these are unlined.  I decided to add a cotton voile lining to the yoke area.  It just helps the neck area sit a little better, and looks more finished. 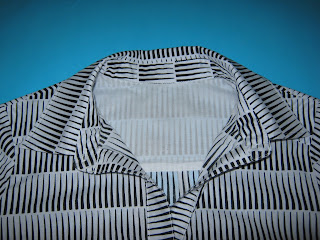 The front band is in one piece and just folds along the foldline.  And the collar is on a collar stand, which I like.  Otherwise, just bust darts, and a pleat in the back.  Simple to sew, simple to wear.

The shirt went together very easily, and will become a TNT for me.

As for costing, I am not even going there with this garment - I was just lucky enough to be able to salvage enough of my original mistake to make a garment.

Oh, the fabric is a poly cotton, quite lightweight, that came from Spotlight.

I'll quickly show you some pictures - and please forgive me wearing my track suit pants and slippers.  It's winter here, and it was bad enough wearing a summer shirt, let alone wearing cotton pants and sandals.  I'll never make a model, not that anyone has asked me or is likely to ask me to be one! 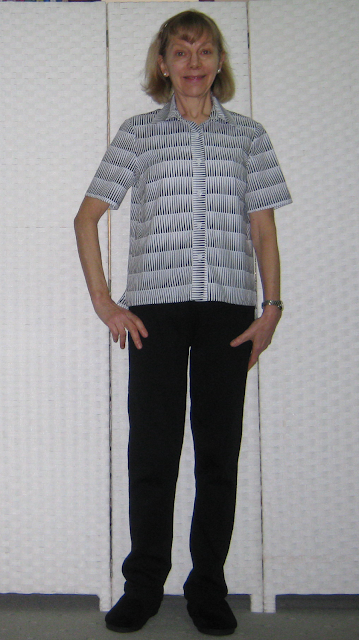 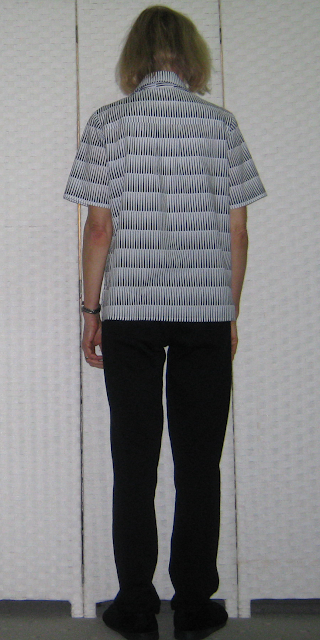 
*****
The exciting news for the last fortnight, except I was feeling crook, so it did not feel exciting at all, was that FINALLY, our roof had been replaced.  The old slate cyclone damaged roof is gone, and new concrete Wunderlich tiles are now in place.

They took longer than expected as the first week we had rain. They managed one day, how, I do not know as we had wind gust of 80 kms an hour.  Slate went into rubbish truck, and tiles went up on some sort of winch. 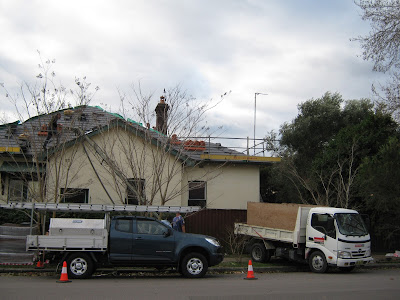 This week they were back with zeal, and managed to complete the job.  Look at our poor lawn (well, this was were the lawn was prior to the plumbing fiascoes. 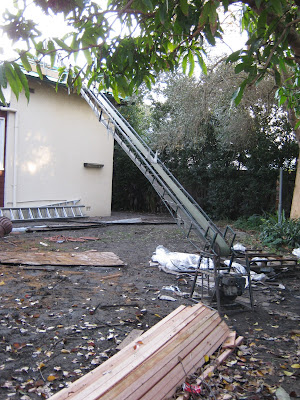 So, we have gone from this: 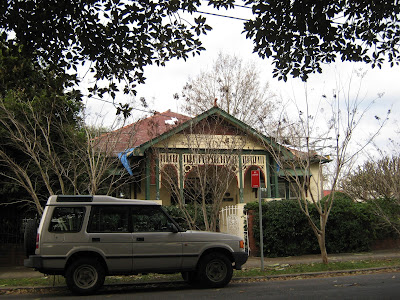 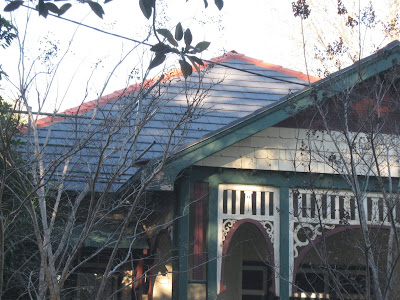 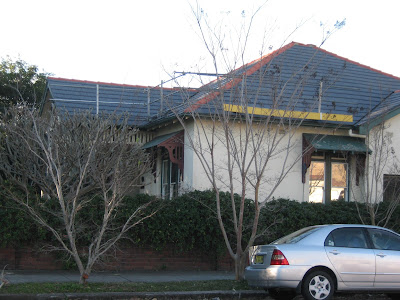 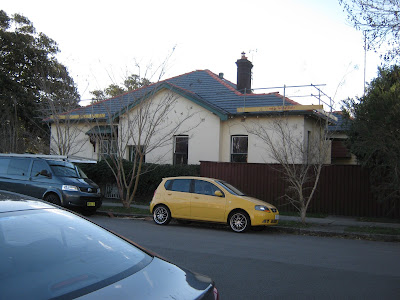 The finials are still to come, and safety rails were removed today.  Next job is getting the awnings sorted out - new shingles.  Then the house needs painting.  And I have to sort out a solution to the falling to piece tacked on afterthought at the back of the house - I'll show you a picture of that another day.  Something nice and light that goes onto a deck I think.

I'll start thinking about that next week, along with thinking  about what to sew next...

For now, I want to wish you all a happy and healthy weekend.