The Top That Nearly Never Happened...Simplicity 2599

The trials and tribulations of a sewing blogger have continued this week in that I found another piece of fabric with flaws in it.  So, although we are nowhere near summer down in Oz, I decided that this piece of stash annoyed me and I wanted to use it straight away because otherwise it was going to niggle at me, you know, what are you going to do with me, I'm flawed, sort of niggle.  The sort of niggle that distracts you and keeps you awake at night.  No, that niggle had to be dealt with...

The fabric is rayon, and the first thing I noticed when I pre washed it was a strange streakiness in the dye.  I decided that if this was going to be the case and I was going to get a sort of washed dye look, that I would prefer the streaks to go up and down, so I decided it was best to cut  the fabric on the crossgrain. This also helped me avoid obvious flaws running about two inches in from each selvedge.
with these limitations, I chose a simple top - which also happened to be one I have long wanted to make. It's been in my stash now for quite a while.  Enter Simplicity 2599: 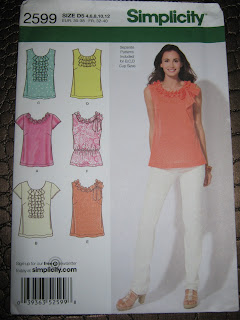 This is a simple top with bust darts at the front, and just a plain back seam, no darts.  The CB of the neckline closes with a button.  Very simple.  I wanted a plain, simple, loose fitting shell, and this was it.

I didn't want cap sleeves though so I altered the sleeve to a short one.  I kept it quite full so that the sleeves are cool to wear on a hot, humid day.  Not that we will have those for some months yet...

I cut size 12 through the bodice and 8 shoulders and armhole, grading the armhole curve out to 12 closer to the bodice. I raised the neckline about a cm and used a 1 cm seam allowance - meaning that in total, the neckline is now about 1.5 cms higher than the pattern neckline.  I took off about 3 cms at the hem as the top was just a little long for me.  The darts were too low for my bust apex, and too far from the apex, so I raised the apex and also added some length to the dart.

It was a straightforward sew I suppose, except I was in the early part of a rheumatoid flare, so sewing was really difficult to do.  But so is anything  and you have got to do something with the day.  I just decided to not go for perfection and some of my seams are a little bit wobblier than normal.  But I persevered and won.

I did find that the button loop was a bit long and had to use a much larger button than that suggested on the pattern.  No matter, a quick raid of the stash found a suitable one: 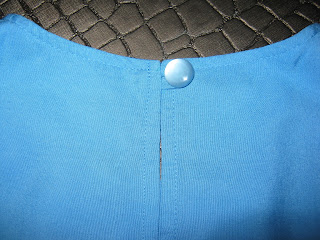 I quite like the larger button, sort of makes a nice feature.  But if I want a smaller button I would shorten the loop.

After I finished the top, I rinsed it out and ironed it. And then I found it.  Another flaw.  I thought maybe I had abraded the fabric accidentally, but it had been nowhere near the feed dog.  So I think, as it was only obvious after washing again, that it was in the fabric all along - I must have got the dud piece, I think.

My first reaction was to toss the thing, but after a bit of calm reflection, decided that was a daft thing to do, as I had spent a lot of sore joint sewing time on this top.  So I rummaged through the stash and found a bit of nylon lace: 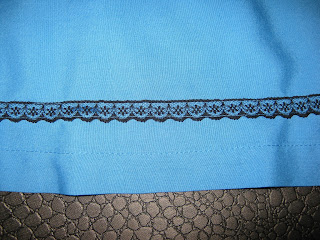 And stitched it over the flaw.  The flaw itself was sealed with some clear nail polish: 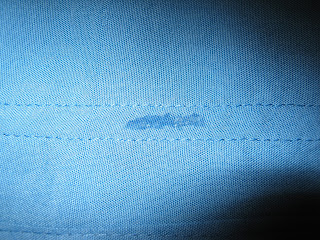 And that solved that problem!  DH said he thought it suited the top.  He knows the right things to say! He's probably learnt from saying the wrong things...

Of course, photo day was a bad hair day - it was pouring with rain outside, so all my hair wanted to do was misbehave :) 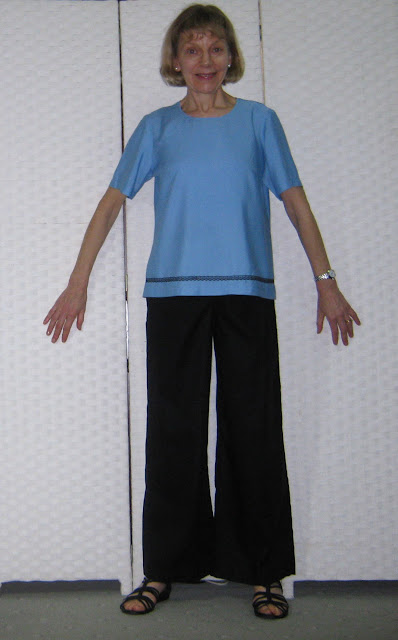 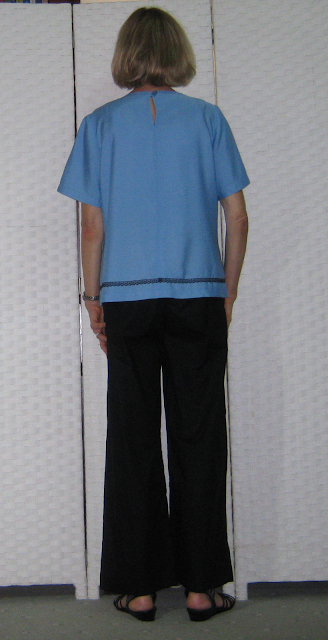 Well, it's cool, unstructured, roomy, and hides the tummy - what more could you want - oh yes, pockets in the pants:

And you get those, too, when you sew your own clothes.  Pants are cotton lawn, made by me, Vogue 9067.  These are the wide leg pants in this pattern - Posts featuring Vogue 9067 pants can be found here.

So, slowly I am building a cool, functional, comfortable and slightly chic summer wardrobe.  It's taken years!