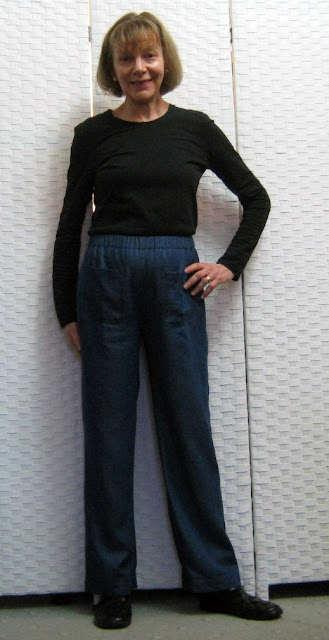 Well, I might be smiling in this picture, but I think it is because I am relieved that I have finished these trousers.

Of course, with trousers, there is always a back story.  I planned to make a more tailored pant out of a piece of Tencel that I had in the stash.  The Tencel had been prewashed, but I think my technique of hot water dipping did not agree with it, and there were dye runs here and there.  Plus a flaw one end of the fabric that I found after I washed the fabric, so I could not return it.  Careful cutting eliminated most of the problem areas, and the style of pant also works with an imperfect sort of dye - a little reminiscent of how denim also fades.

I picked a more tailored trouser pattern that suggested Tencel as a fabric.  I  did a muslin and the trouser looked awful on me.  Then I did a muslin of another pant, and that looked awful too.  By now, I was thoroughly fed up.  I wanted the Tencel out of the stash, so I thumbed through my patterns and decided to make another version of McCalls 6568. 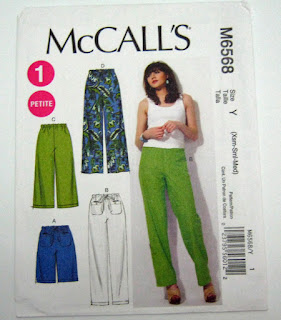 I had previously made this up before, with no real problems.  So I thought it would be a straightforward job to make them again.  I omit the drawstring and the buttonholes from the pockets, as I didn't want buttoning pockets.  The pants are extraordinarily long in the leg, and I removed about 3 inches.

Only I hadn't sewn with Tencel before.  Like other cellulose based fabrics, it was slippery.  This made features such as the patch pockets a little tricky to press and topstitch. They took ages. But they sort of turned out all right.  For some reason, the back pockets wanted to droop - not the front ones, which are actually bigger. So I just secured them with a button. Which looks okay - and the front pockets are still unbuttoned, which means I can easily use them. 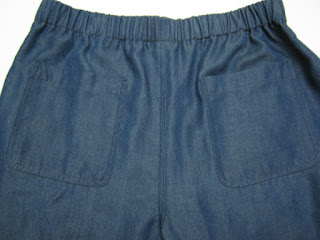 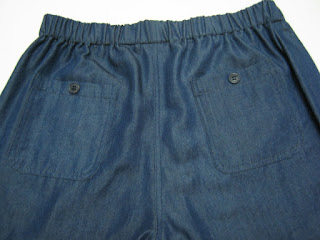 I had the same problem with trying to make the waistband casing - try as I might, it would not co-operate, and came out far too wide for the patterns suggested 1 inch (2 cm) elastic.  So I threaded a wider elastic through (that's why you stash all sorts of widths of elastic).  As it so happens, because of the extra drape of this fabric and I suspect it is a slightly looser weave than the cotton pants I had previously made, this was a good thing because the crotch was a little lower.  A wider band sort of pulled everything back in place. Also, it looks better - if an elastic waist pant can ever be said to look good uncovered.  And as Tencel is a bit slippery, the wider elastic will hold the pants up better.

Because the fabric frays a lot, I turned the casing under to finish. And added a bit of ribbon so I can quickly tell front from back when dressing. 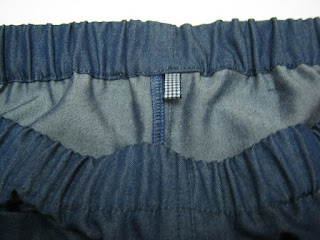 Even though I shortened the leg length, I found that because the fabric was very drape-ey, I needed to stitch a deeper hem. Which I think suits this fabric.

My pictures are as usual up to my standard poor practice :)  ... 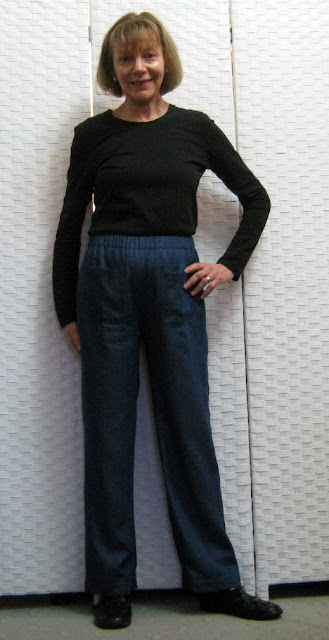 Now, as you know, I am wanting to change my style.  These pants are not at all my new style, but seem to be remarkably like my old Pollyanna Practical style. Once again, they are another pair of house pants, not the smart, casual look that I want to move too.  And floppy fabrics like this do not suit me at all.  I think the denim look also looks dated and old lady.

Crisper fabrics work for me - here is my first version of this pant: 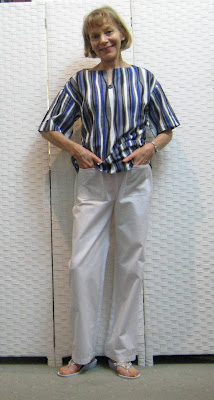 Having said that, I did want to get the Tencel out of the stash.  And I had not sewn with it before and had no idea how it handled or what it would do. I have a bit more in the stash, and will have to be careful what I make with it.

So, overall, I have learnt to sew Tencel and am familiar now with it's feel and handle.  I have worked out that this sort of casual style is not me.  And I have got the flawed fabric out of my stash.

And I am well up with my goal of sewing for 30 minutes a day for the month of September.

Before I go, I just want to thank you for your comments on my last blog post. As you know, I usually reply to everyone, but this week I worked all week catching up with accounts that did not get done when the roof was replaced.  Plus my husband is a little unwell after his mishap.  And as far as my posts on style are concerned, for those of you who are interested, they will come, but it may take me a few weeks.  I have lots on my plate still in real life - it certainly has been one of those years.  I have  a fence repair to sort out long distance now -my Adelaide cottage had an old fence that did not make it through the last storm.  Unfortunately, the cottage has been declared heritage, so I have to deal with council red tape and nonsense - real time wasting stuff.  And I really must sort out my new car before my 22 year old one unceremoniously decides for me.

I'd rather spend all day sewing...