Continuing in Green, Butterick Jacket B5701. 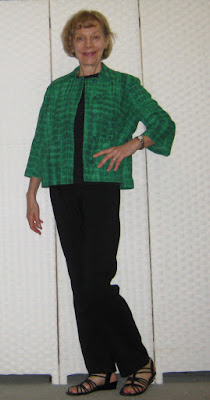 I did get rather a lot of this green quilt backing cotton - 3 metres X 260cms, @ $3.00 per metre! - but thought it would be about the right price to experiment with. So far, a dress (great pattern),  trousers (great pattern) , and now this simply, boxy, jacket.

Which I love, even though it is square and boxy, and some would say unflattering. Not to my eyes, it's just a relaxed, wearable, classic shape as far as I am concerned.

The pattern I used was Butterick B5701, a See and Sew version of a jacket that was also in the main jacket section at 4 times the price : 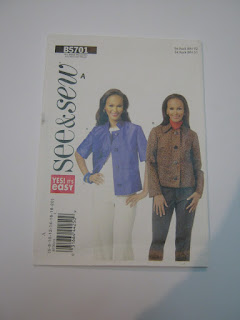 I really liked the straight lines on this jacket, and the seaming and top stitching.  I also wanted to try an unlined jacket, because tailored, fully lined jackets, which I can do reasonably well, are just not what I tend to wear much of the year in a sub tropical climate.  The fabrics recommended were line, poplin, lightweight denim, and lightweight broadcloth.  My cheap old cotton is a  bit stiff, so I thought it would impersonate denim quite well, and give me a good idea of the sort of result expected. 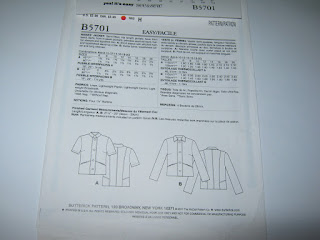 As the fabric was cheap, I  did not bother with a muslin, but went straight into the jacket. As you can see from the main pattern picture, it has a large amount of ease built into the style.  I decided to go with this, more to see what the results were like than anything else. I cut size 10 neck and shoulders, 12 back, and 14 front.  I often use this combination of sizes (or size 8, 10/12-14) and it normally works, but I think next time I will go down to 10 back and 12 front.

I settled on 3/4 sleeves, because this will be a late summer/early autumn sort of jacket.  I liked the collared version, so that is what I did.

All seams were flat felled, which I love to do.  It gives a nice finish. I did not flat fell the side seams, but used a binding.  I also used a binding on the front facing.  I wanted to try these techniques, because, unbelievably, I have not done them before, in all my years of sewing.  I do think a trial run on a wearable muslin is a good idea with an untried technique, however simple, just to get the feel. The armholes were also bound, but I've done that before now, and don't mind doing this now - a year or so ago, I would still avoid binding - something I had never enjoyed, I suspect since childhood, were my first attempts at finishing binding by machine were a bit woeful.  Just one of my very few sewing blocks. 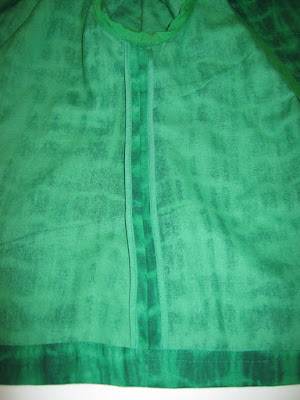 Then other things I will do quite happily, things like flat fell seams and top stitching for instance, which some people do not like to do.

And with this jacket I had plenty to satisfy me, with the back 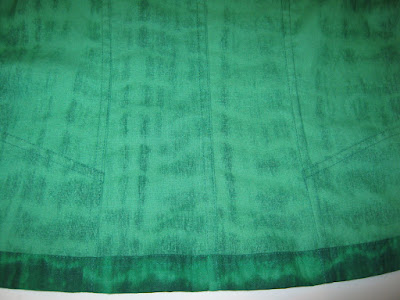 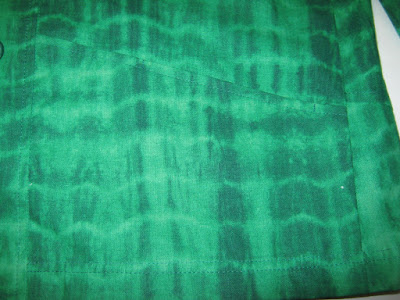 And the collar and collar band, and front band: 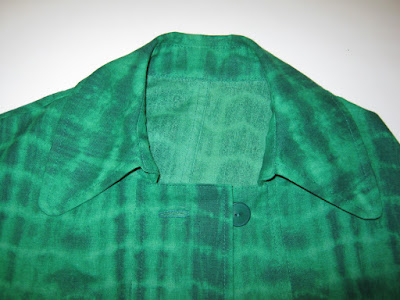 And, I even found buttons to match, but they are smaller than the recommended 28 mm, they are more 23 mm.  The pattern used 4 of these larger buttons, but with my smaller size, I though five were needed, so the buttonholes were re-spaced.

But of course, the winning feature in this jacket have to be the wonderful pockets: 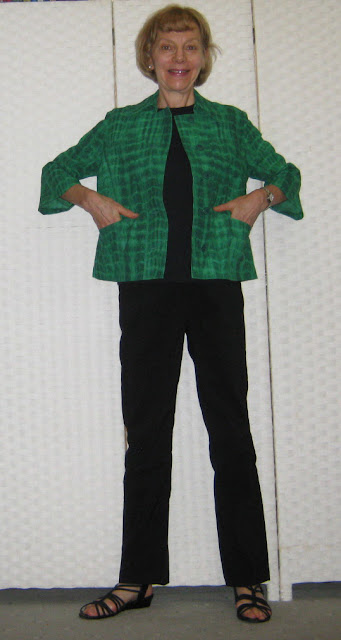 And the nice shape on the side:

And the top stitching and seaming on the back, which you can't really see here: 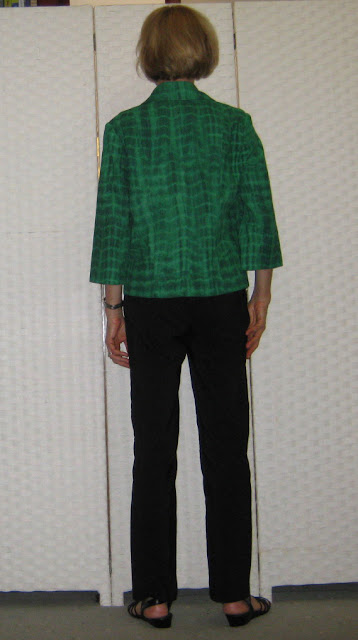 Well, I hate to start saying goodbye with my back to you, so one more of the front: 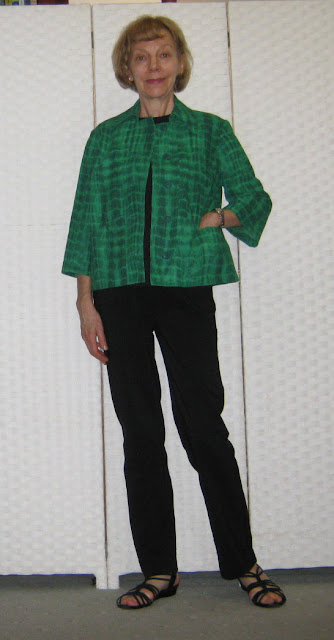 I do like this jacket, and I think I would like to make another one day in a much better fabric, but I will go down a size.  It's wearable and relaxed, but still smart.

I've nearly got to the end of the green posts - one more to go, the little green skirt.  Next week: 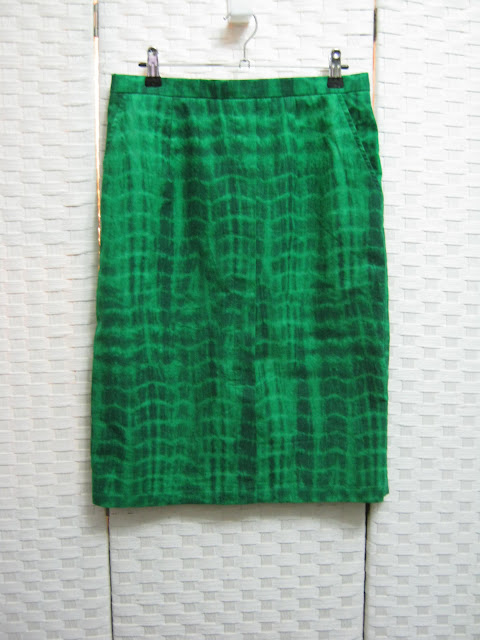 I drafted the side pockets myself.  An if you look very closely, you will see that there is a fold down the front, with a little kick pleat.  I love this variation , and will show you more closely next week.

Hoping you are all well and happy,