A few weeks ago I made this little Whimsy out of a cotton knit that was in my stash.  It had lived there for some years, mostly because it was a strange sort of colour, ostensibly navy, but it looked very red when seen with navy.    And so it didn't quite go with navy, or many other blues for that matter.    And when I pre-washed it, the red factor was confirmed, because the knit bled quite a bit -  there was  a lot of bluey- red in the water.  I wondered if I should toss it, but decided to try and fix the dye. It took me two attempts to fix the dye, so that I could actually use this fabric without fear of it accidentally tainting another garment in the wash.

The knit was also awkward in that it had lots of holes in it. Deliberate holes I mean, knitted into the fabric in diamond pattern at quite frequent intervals. So I couldn't use it for a top, without it needing something underneath. And there was the problem of the strange colour, not navy, not purple, not black. So I was not sure what I would layer it over. It was not really going to work with anything.

Then one day, while rummaging through my patterns I noticed this: 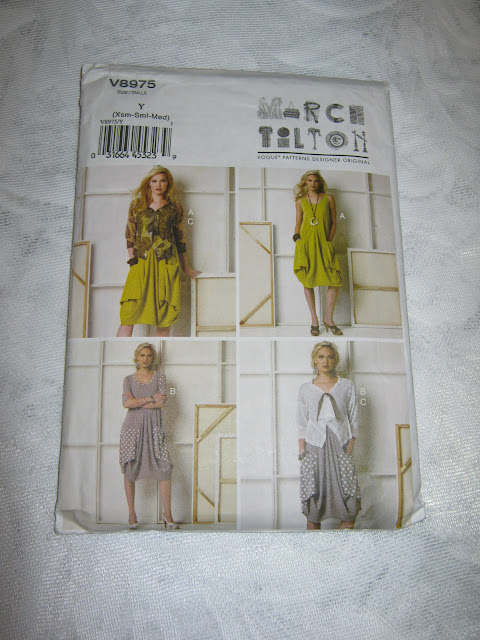 I thought this little Marcy Tilton cardigan might just work with the fabric. The pattern suggests using a mesh knit, and of course my knit is more of a medium weight. Still, I thought it was worth playing around with.

It was a bit of a jigsaw puzzle to put together, with strange side panels: 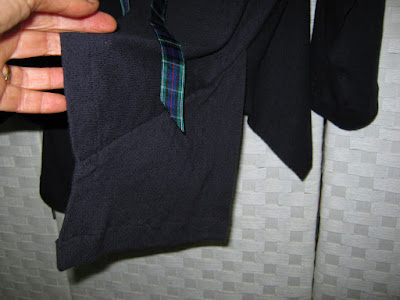 The ribbon tie goes through buttonholes, also a challenge with my knit. I should think it would be just as much of a challenge, if not more so, with a mesh.: 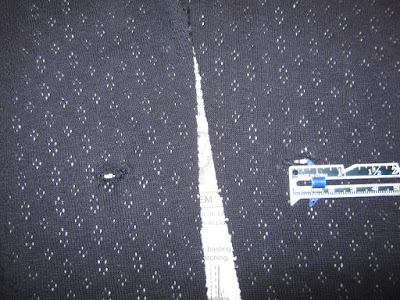 And I had to alter the facing/collar as my fabric was too thick to do what the pattern suggested. The collar was supposed to be the mesh folded back on itself to make a little pleat.  So I just made a soft roll to get the facing in the right place, and used the seam and roll as my finish.  Perhaps not the best solution, but it sort of works: 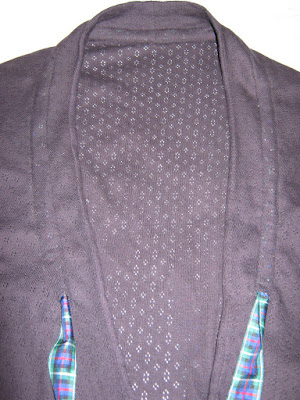 (You can clearly see the red hued navy in the above picture).

Now, I have to admit that this little Whimsy is not quite my style. But it works during a month with non stop rain.  Our March was the wettest start to Autumn since 1972.  It poured and poured and poured.  I got quite fed up. And on the day I took these photos, I had enjoyed a thorough sub tropical drencing.  Hence my rather relaxed garb.  I had just changed out of my wet clothes, and pulled on some comfy and comforting house things.  The Whimsy seems to suit the relaxed slightly holiday boho feel, to the point that the colour also didn't really matter: 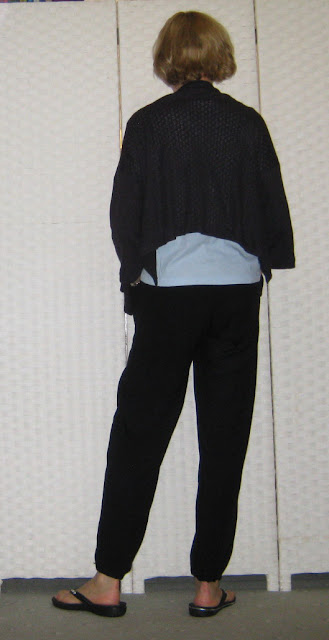 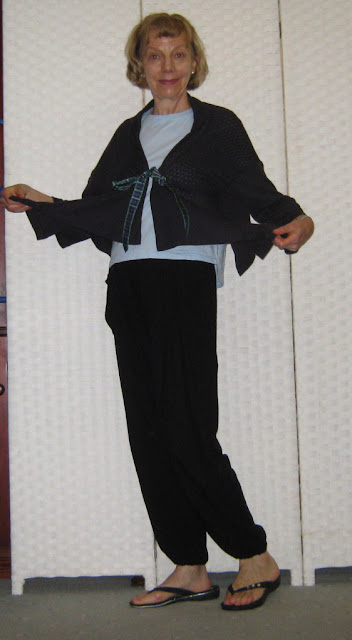 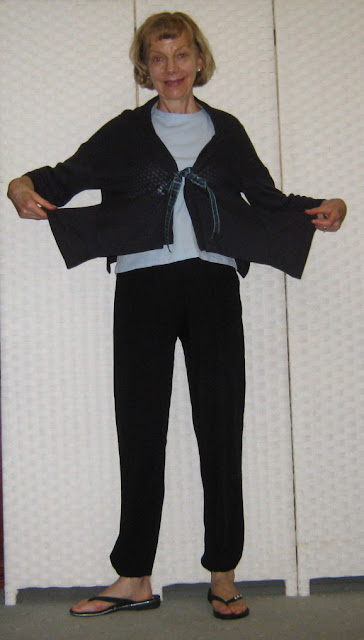 And the tartan ribbon was about the only ribbon that worked with this. The navy was too navy, the purple was too purple, the black was too black. Then I noticed this tartan, which has blues, greens, reds and black in it, which means I can easily wear the Whimsy with my blue and black bottoms. And, I think it adds another touch of whimsy to the Whimsy.

On another note, the knit was reasonably easy to sew with an ordinary zipper foot, but did walk a bit.  It didn't seem to matter, I just pushed and manipulated the fabric so things sort of worked. This was really an experimental and play sew. But, I decide that when I am not experimenting and playing with a knit, but wanting perhaps to sew without the knit walking it was time to buy a walking foot: 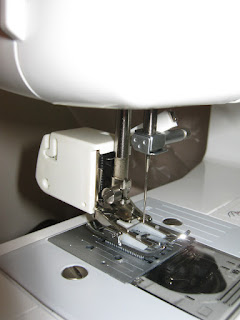 So, now I can get serious about sewing with knits.  The time has come...

That's it for now, I hope I haven't posted too many photos, but I know a lot of you love Marcy Tilton garments.
Vogue 8975