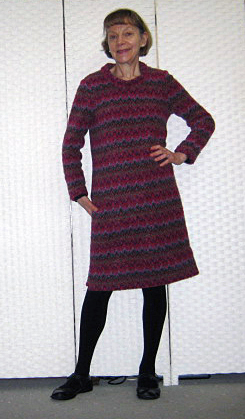 It's been a couple of weeks since I last blogged. Suffice it to say, real life needed attention, and there has been little  time for blogging or social media.

Whenever I have a full plate of responsibilities, I tend to choose easy sewing projects.  And when we had a cold snap (it has been quite cold for Newcastle) and concurrently Spotlight had a sale of a knit that I have been watching all winter, I put the "easy sewing" and "knit I want" and "it's cold and I want a warm dress" together and decided to make a warm, woolly looking knit dress.

I have always wanted to knit a dress, but I don't think I will get around to that for about a decade yet, so this dress also addressed that reality.

Before I continue with this post about the dress, though, I just want to reply to some comments that some of you left on my last post:

This was a Burda Miss Petite pattern.  I am a petite, and Anne asked if this pants fitted me well.  The answer is that they do, much better than the normal sizing.  And Catherine and Irene mentioned products to stop Fraying.  I have tried Fray Check, and Fray Stoppa, and found that they washed out!  So, in places that don't matter, such as the flaw found inside the pants pocket, I just dab on clear nail polish.  I'll try other brands and see if I can find a better quality product.  Ebay often seems to have all sorts of sewing goodies, so I will look there, instead of Spotlight.

The fabric I used was a very spongy and thick knit, a mix of polyester, acrylic and wool. It was originally priced at $49.99, which was a bit too much for me, but when it was reduced to half price, I swooped. 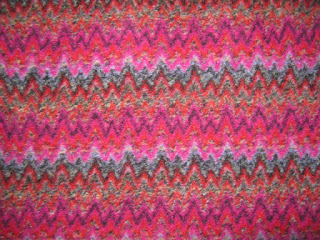 As it was so dense, I knew it would be tricky to sew: 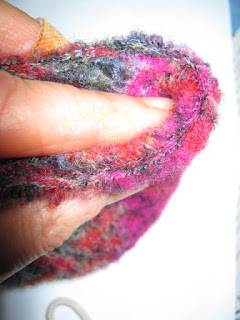 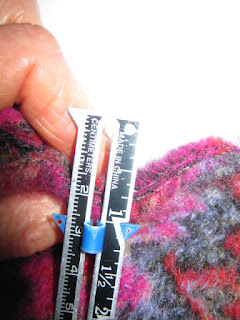 Not easy to see, but I hope the above two pictures give an idea of the loft of this fabric!

I looked through my patterns for something simple to make and settled on this Burda pattern: 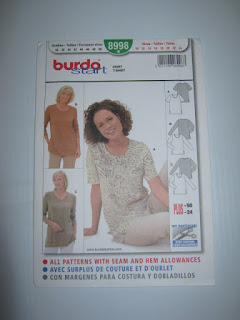 It's a loose tunic top, and I thought that it would work as a dress.  I chose size 10, with finished bust measurement of 38inches.  I thought that with the bulky seams, and with wearing things underneath, this would give me the fit I wanted - not too tight, not too loose.  I just extended the side seams of the pattern to dress length and added side splits (which were also on the tunic).  I always add a button at my side splits for days when I am more vigorous in my strides: 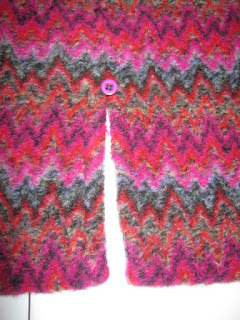 Now, this was a really tricky fabric to sew.  I decided to use my big machine and used a small zig zag stitch - there is no way my overlocker would have sewn two layers of this together.   And hems were done by the same technique.  The fabric was naughty, and really wanted to walk down the length of the stitch of course, but I countered that by holding the underlayer taut.  And it wanted to walk sideways too, so I had to really push, pull, and hold in all directions at once to get a reasonable seam.  Not perfect, but reasonable.  Seams had to be redone, and the neckband I did a couple of times to get it looking neat.  In the end, the seam allowances were tacked down, the band was tacked on and sewn on, and then I folded it down and stitched in the ditch from the right side - and that was tacked down too!  But I got the inside of the band looking passably neat.  Not perfect, but good enough:

(I also made the neckband much wider than the pattern stipulated - this chunky knit needed a chunky sort of neckband). 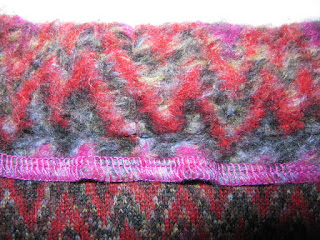 Anyway, after a few frustrations, and a little more time than I expected - but not nearly as much as handknitting a dress :) - I am now the proud owner of a smart, warm, woolly knit dress.  I love it!  Even if I am not smiling much - I am really tired today after finishing the quarterly tax business yesterday. Mind you, the photo's turned out a bit fuzzy too, so maybe it doesn't matter.  Anyway, you will get the idea of the dress, I hope.  I've kept the pictures small, because they are too blurry otherwise. 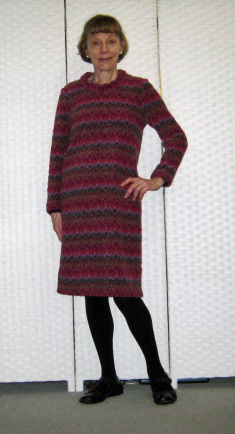 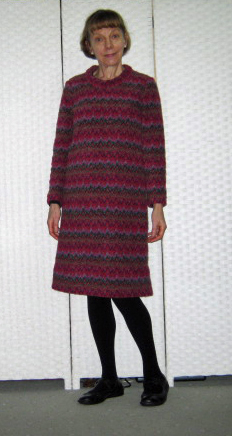 Now, I purchased 1.45metres of this knit, and there was a bit left over - next week I will tell you what I did with that....

Email ThisBlogThis!Share to TwitterShare to FacebookShare to Pinterest
Labels: Burda 8998