A Bra Break from Sewing - The Watson Bra 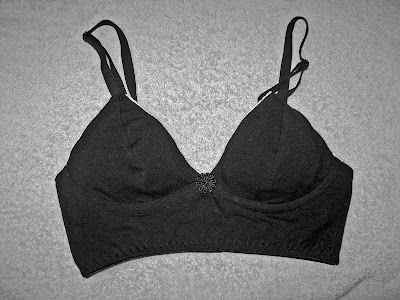 The SLSS household has not been well this week.  I did not even feel like sewing a garment.  I had to do something though, so I decided to play around with making another bra.  And unfortunately I made it in a black fabric, so the photos are a little dark and do not easily show detail.  And in keeping with the 70's retro vibe of the Watson Bra, I have changed my photo to black and white.

Earlier this year I made a bra using a Kwik Sew pattern.  This was more an exercise in learning the techniques needed to make a bra.  Unlike some sewers, I actually have to practice a few times in order to understand what to do.  I can't just blindly follow instructions as I am not an aural.  I have to immerse and understand from inside out what to do and why.

I also need to understand principles behind what I do.  It helps to explain the process.

In due course, as I become more proficient in both principle and process in bra making, I shall share more here.  For now, though, this is the bra I made: 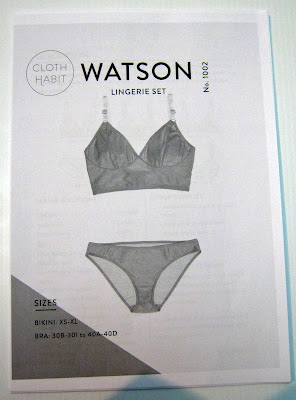 This is a wirefree bralette pattern.  It is to be made from stretch fabrics - with quite a lot of stretch, such as lycra blends.  The patternmaker suggests that the bralette has a forgiving fit, due to the use of quite stretchy fabrics.  This made me wonder how much support this little bralette had.  Some people who have made it claim it supports nicely, others say it is not so supportive.

The front band is interlined with a firm tricot to give some support.  The back band is powernet or stretch lycra blend.

I looked at the construction notes and could see that the two inner cups just met at the centre, and the seams of the cups themselves were just stitched down under the cups. This made the front corner of the bralette untidy looking.  I also know (from previous reading about bramaking) that a plush casing that wires go through can be used to offer a little more support.  I had some casing like stuff - not the proper plush casing, but something that would do -  in my stash, so I experimented with that to cover the seams and to cover the front part of the bra on the inside: 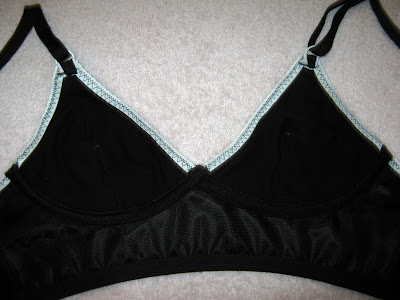 As this is only a test and fitting bra, I used up bits in my stash that were odds and ends.  I found a white elastic that I used on the neck and arm edges.  I had no inclination to keep changing bobbins - usually I would, but my head cold got the better of me - so I used black throughout. Still, it does show you the stitching process, which is two fold.

(and the white marks you see are my marking pen marks - they erase with water very easily).

The back is fastened with a three hook and eye set: 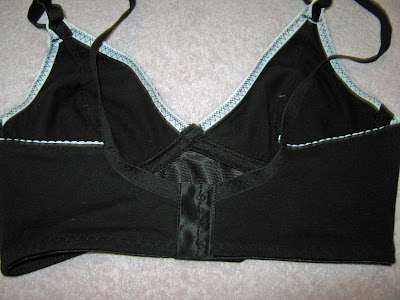 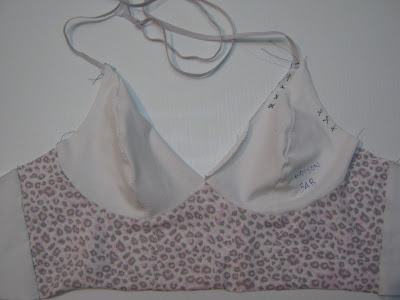 I thought that 34B was about right, and so the muslin confirmed.  I did think I needed to alter on the outer curve.  I also thought that the seam allowances had been miscalculated near the strap - so I added a bit more. The xxxx's mark the spots.

It's a bit unglamourous, and so is the attempt at seeing whether this would fit.  I tie the elastic round my neck in a halter fashion, and then sort of hold things up, round or together to see whether things are about right.

As it so happens, the fit is about right:

As far as fit when worn is concerned, it could be more supportive.  I think I will use a firmer fabric for the cups next time.  I also think that I need to pull the elastic in more firmly around the outer arm curve - the pattern instructions were a little vague here - just a gentle stretch, whatever that means.  I will also use a firmer elastic.  I'll probably take out a small amount at the side too as I am a straight frame figure.  I could also add more to the armcurve area. The casing under the breasts is certainly a good idea.

So, now I will wear this as a summer time after work lounging bra, just to get the feel of the fit. Adn then, when I feel a little more inclined, make myself a "for real" version of this bralette. And I will look at finishing the exposed seams in a more RTW fashion.

Posted by sarahlizsewstyle.blogspot.com at 5:55 PM