A Very Naughty Knit indeed - and another Kwik Sew 3766 top. 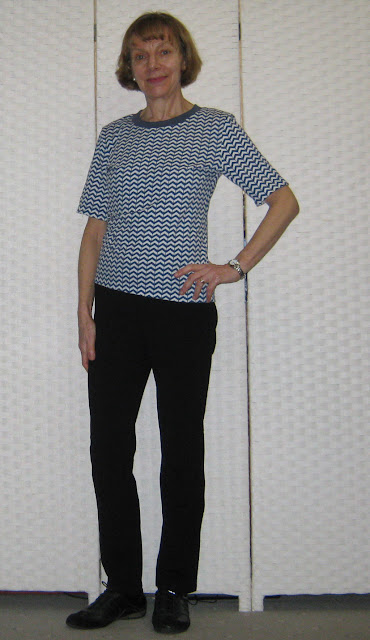 This is going to be a fairly short post today, mainly because I somehow wiped out some of my pictures. And I have a sort of modus operandi - finish the garment, take photos (not my favourite thing), blog it, and move on to the next project.  So, I don't have much to share except for the back story and the finished garment.

On the plus side, I seem to have sorted out my camera problem.  I was getting poor, out of focus, fuzzy pictures.  My camera is supposed to be set on Automatic, because I am not someone who has any sort of interest in photography. DH suggested that maybe the setting had been accidentally altered.  I think this was the case, so photos may now improve again!  Not promising though...you know me and my thoughts about taking blog selfies!

just made up a batch of unruly sweater knit, I decided it was time to make a simple little t-shirt out of a remnant of cotton/lycra knit that I had stashed.  Only it didn't quite go that way. 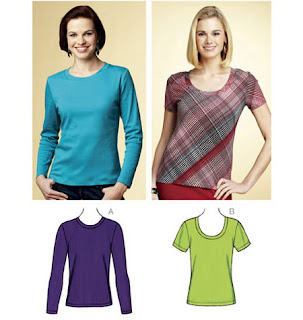 I have made plenty of these before - all posts can be found here.  It looks so different, and fits so differently depending on the knit I use.

I preshrank the material, but the selvedge was bright orange. Although there was no obvious bleed (I stood with the dye fixative ready, but it was not needed) - later I found some light orange marks.  So I had to work around those. So intent was I on cutting the main garment, I forgot about the neckband, mostly because I usually use a rib.  Luckily, when I raided my stash of rib knits, I found a perfect colour. This was quite a fortuitous mistake, because I think the solid rib band looks fantastic and makes this garment.  It also holds the neckline nicely, as the fabric was very stretchy.

Sleeves were cut to the length I could cut them - they are not the short  length shown in the pattern.

The other issue, and it was a big one and nearly had me stopping the project before I started, was that the horizontal stripe was not horizontal. The vertical stripe was quite vertical, and ran along the rib of the knit.  So I cut of course using this line as my "grain line".  But the horizontal stripe did not go at 90 degrees, it ran at an angle uphill, or downhill, depending on which way you look at it.  I had photos of this, but they are the ones I have somehow lost.

So, then I had a dilemma.  I decided to push on and work around the problem.  I thought that if I could get the hemline on an angle, that would visually distract from the problem.  And with a small amount of ruching on one side- the short side, the folds from that would make the angle hem look like it was meant to be: 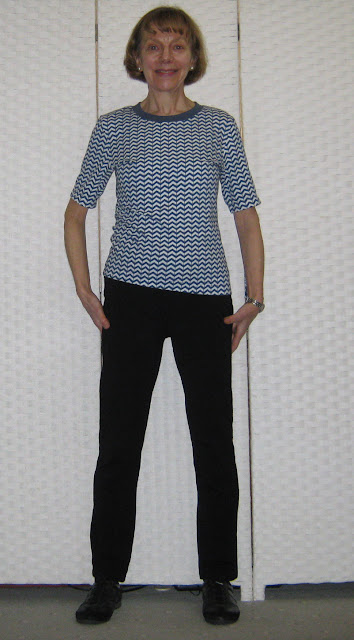 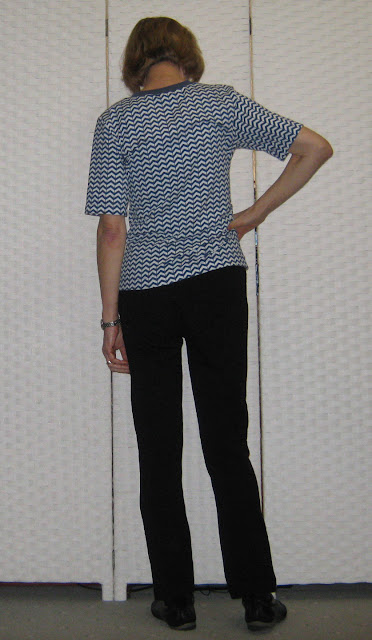 The back shot is an action shot - I had just finished moving the screen and my camera indicated it was about to go off - I hadn't quite got into position!


And if you look at the hemline - which is straight, it's my ruched side pulling things up - you can quite clearly see those stripes are not horizontal.

So that is it.  I am glad I persevered, because I rather like my  funny little knit top: 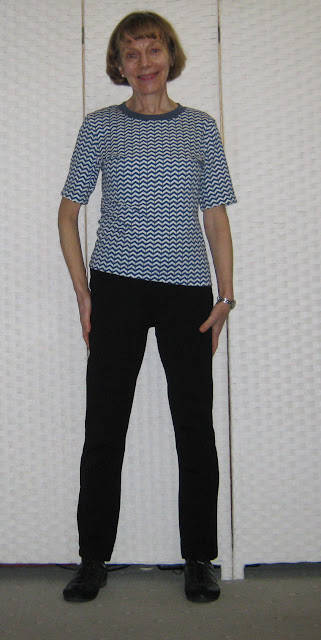 I am so glad that I only purchased a remnant piece at $2.00 per metre.  I would have been very cross to have paid $24.99 per metre for a fabric whose print was not accurate.  I'm always wary with printed patterns.

That's it for now.  I'm starting to perk up again, as life returns to a new normal.   I hope to get my blogging routine back on track too!. Thanks for your patience and for continuing to read my blog.  It's much appreciated.