As promised, I am back with my next blog post. This week I will share my second version of Burda 8998 with you. 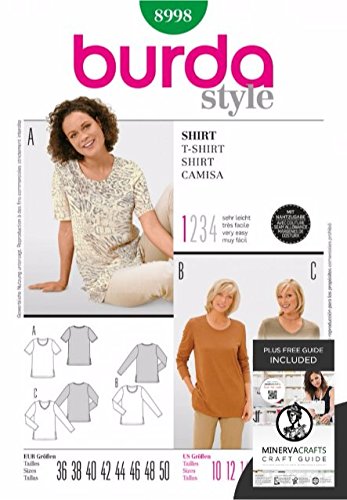 I wanted a roomier style of t-shirt, thinking it might be more flattering to wear.  Out came this pattern and out came a remnant piece of combed cotton knit.  I was none too sure about the roominess of this style, but nothing ventured, nothing gained.  Only one way to find out, and that is to try it.

My first version was made in a thick, bouncy, knit and was designed to be worn over layers: 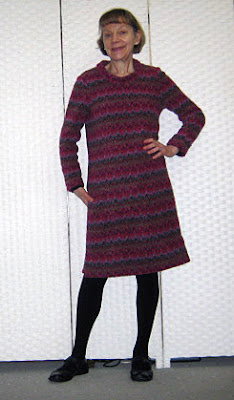 (You can find the original post by clicking here).

So I knew the rough parameters worked.  But a different fabric, and much less bulky meant the final look was quite different.

I was making this during a period of some stress, so I decided to use the same size as before - namely size 10/36.  Which happens to be the smallest size for Burda 8998.   As for length, it is shorter than the pattern, but by how much I could not tell you as I didn't jot it down on my notes. It's probably on the pattern pieces though - I trace those, and usually note any alterations there, not as notes.

For larger sizes, the pattern adds a bust dart, which is not a bad idea for ladies with larger busts.

As for the neckline, at first I raised it, and then I dropped it, so it is close to the pattern but may not be quite as the pattern.  Quite often when I sew I am a little on the immersive side, and tend to play around with what I have.  Notes, measurements and perfectionism are not so much my forte.

I decided to cut a slightly wider neckband than suggested by the pattern as the pattern neckband was very narrow with a finished width of 3/8 inch (just under 1 cm).  That was not going to work with the thickness of my knit, or it's pattern - the pattern would get lost.

I followed the ideas as they were outlined in the pattern, but just made the neckband a bit wider.  The neckband is cut quite long, and when finished, flutes a little. 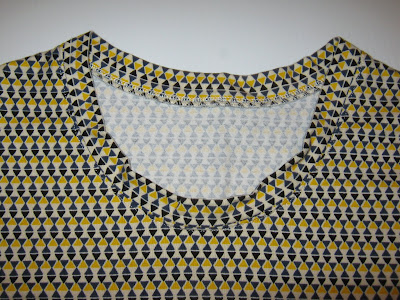 I have to say though that when I wear the top the neckband does not look too bad. And in such a busy fabric the fluting is certainly not obvious.

I have always found that knit neckbands sit better if they are shorter than the neckline.  It also helps to use a rib or a stretch knit for the neckband.  However, a black rib band would have looked harsh on this fabric, so I stuck with the combed cotton. I played around with a diagonal/bias cut but it just looked wrong with the already busy pattern.  So I settled for what I could do.

I always stitch the neckband on first with a zig zag stitch and then check fit. Then I overlock the sea,  and then I zig zag the overlocking down just below the stitching line of the neckband.

I shortened the sleeves at the L/S line as I wanted a 7/8 or 3/4 sleeve.  The sleeve has a high head,  and isstitched into the armhole on the round.  I eased the sleeve first to help it sit nicely - it was a little larger than the armhole.  The instructions do not ask you to ease the sleeve heads.

As for hems, I used my coverstitch: 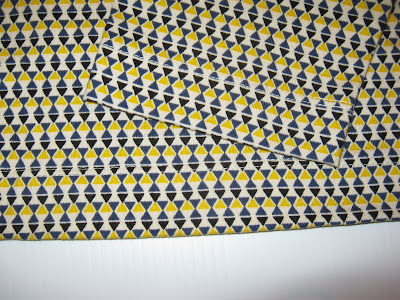 The above photo is close to the colour of the garment.  Yellow is not my best colour I have to admit, but I still like the top.   Unfortunately my lights have washed out some of the colour - and show up my allergic shiners!  One day I might get the hang of where to place the lights, and then I will have to work out how to get rid of shadows.  One step at a time, I think.

As you can see from the side view, I need to make a narrow back adjustment if  I make this top again. Overall, the top is as roomy as depicted on the envelope cover.  I don't really think this is a style that suits me as much as it might a more oval shaped figure that has weight distributed all around in a fairly cylindrical fashion.

Having looked at the top on Pattern Review, it does seem to work well on this sort of shape. (I also noticed that the neckband rippled on a few of the tops, and other people also did not like the neckband).

Of course, the top does work in a bulky knit as in the dress I showed you.  I wonder what it would be like in a drapey knit?  An experiment for another sewing day.

Meanwhile, I will enjoy wearing this top as a snazzy work top.  At least there will be plenty of room to move in it!

That's it for this week. I hope to be back with a quick post next week.

Until then, take care everyone,